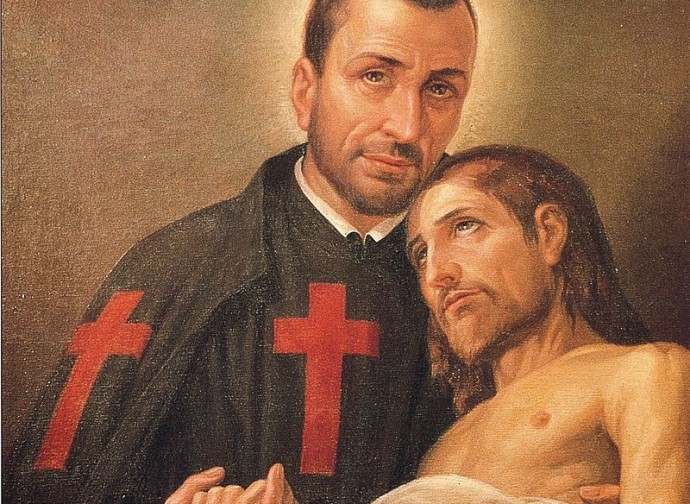 On May 25, 1550, seventy-eight days after the death in Spain of the Portuguese Saint John of God (1495-1550), Saint Camillus de Lellis (1550-1614) was born in Bucchianico, a small town in Abruzzo. Providentially, it was like the baton being passed between those who together are the universal patrons of nurses, the sick and hospitals.

The founder of the Ministers of the Infirm, today commonly called Camillians, had such a transport for the sick that one day, as we learn from a testimony at his canonization process, he was seen “kneeling next to a poor sick man who had such a revolting and stinking canker in his mouth that it was not possible to tolerate so much stench, in spite of all this Camillus, standing by him, their breath mingling, told him words of such affection, that he seemed to have gone mad with his love, calling him particularly: Master, my soul, what can I do to serve you? Thinking that he was his beloved Lord Giesù Christo”.

The second long-awaited son of the noble couple Camilla de Compellis and Giovanni, both advanced in age, lost his mother when he was thirteen. Some time later he embarked on a military career following the example of his father, who died when Camillus was about twenty years old. An ulcer on his right ankle forced him to a first hospitalization at St. James's Hospital in Rome, where he then also began to work; he was soon dismissed for his tendency to neglect the sick, due to his “very terrible” character, as he would remember in his writings, and the passion for cards, which led him “along the banks of the Tiber to play with boatmen”. He enlisted again and took part in the campaign against the Turks. But he squandered all his earnings on card games, to the point of finding himself begging. His daily contact with the Capuchins of Manfredonia, where the friars offered him a job as a labourer, proved decisive: on February 2, 1575 he reached the decision to convert. He gave credit for this to Father Angelo, who exhorted him forthrightly to serve God by “spitting in the devil's face”.

He joined the Capuchins as a novice. But twice in four years the painful wound on his ankle led him to return to the Roman Hospital of St. James and prevented him from completing his novitiate. This cross, which he accepted, which was like his polar star. This time in a true spirit of service, he resumed work at the hospital. Here he met St. Philip Neri (1515-1595), who became his spiritual director and encouraged his vocation to the priesthood. Camillus began to look for companions willing to “love Jesus Christ infirm”. Five employees of the hospital, with whom he met to pray in a small room, joined him. In 1582 the Society of the Ministers of the Infirm was born and nine years later it was elevated to a religious order by Gregory XIV, struck by the assistance given to the sick during the famine in Rome. On December 8, 1591 Camillus and 25 companions made the solemn profession of obedience, poverty and chastity, adding a fourth vow: the “perpetual corporal and spiritual assistance to the sick, even the plague-ridden”. To the point of giving their lives.

Previously, under Sixtus V, the saint had obtained permission to sew on the black habit, at chest height, a cross in red cloth, symbol of the redeeming Blood shed by Jesus. Who once, at the height of tribulations, said to him, “What do you fear? The work you have begun is Mine, not yours”. With his trusting abandonment to Providence, the Order expanded and new communities soon sprang up in Naples, Milan, Genoa, Palermo, Bologna, Mantua and other cities, always at the service of the hospitals (on the death of the founder there were 15 convents and 322 religious). Camillus wanted healthy meals for the sick, airy and clean wards. To transmit his devotion to his confreres he used to shout: “More soul in the hands!”.

So much affection and sacrifice for his neighbour was born from the love for God and Our Lady. Providing for the body of those derelicts, he wanted to “take their souls to Heaven”. He ordered that there should always be someone at the bedside of the dying, so as to assist them spiritually in the extreme moment. So the people of Rome renamed the Camillians “fathers of the good death”, certainly not the one expressed diabolically today in the word euthanasia, spawn of a deception that despises the cross, but the authentic good death, in intimate union with the sufferings of Christ, with the help of the true piety of the brothers and the grace of the Sacraments. A few days before his death St. Camillus succeeded in completing his spiritual testament. He humbly asked for the charity of Masses and prayers in his suffrage, warned against the devil's false good and made this exhortation: “Let us not bury such precious talent that Our Lord has placed in our hands, so that we may attain holiness during life and then eternal glory”.