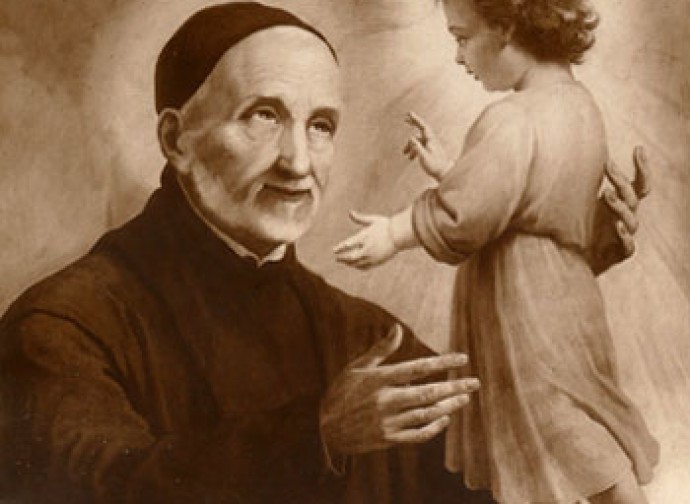 A native of Carpi, near Modena, he was educated in the Christian virtues by his mother and developed a passion for poetry and philology. After falling in love with the pure beauty of a young woman called Chloride, whom he met in church, he devoted himself to law. After obtaining a degree in civil and canon law, Bernardino went from one municipality to another in northern Italy, working as a podestà, praetor, tax lawyer. He was courteous and generous, but earthly things sometimes made him stray. Because of an injustice suffered by his family, he could not hold back his anger and wounded the person responsible on the head with a dress sword.

Around the age of thirty, another fact shocked him. He received the news of the death of his beloved Chloride, which was added to the sorrow for the situation of his administrators, afflicted by a serious famine. In despair, he was tempted for a moment by the idea of committing suicide, which he overcame with the help of prayer. On July 3, 1561, while meditating on the world's vanities and divine graces, the woman he had loved honestly in his heart appeared to him and pointed to heaven. Shortly afterwards the viceroy of Sicily called him to Naples and it was here that the pivotal moment occurred. Touched deeply by the sermon of a Jesuit, he asked to confess to him. The priest noticed his inclination towards religious life, invited him to an eight-day spiritual retreat and suggested devotional readings. This resulted in the thirty-four year old Bernardino deciding to enter the newly founded Society of Jesus.

He was ordained a priest three years later. His spiritual progress must have convinced Saint Francis Borgia to choose him as novice master. The young students and the prisoners, the sick and many other faithful, whom he spiritually assisted and devoted much time to their confessions and catechism, became aware of his spiritual fatherhood. In 1574 he was sent to Lecce to investigate the possibility of founding a Jesuit house and college there. He soon won the heart of the people of Lecce, who benefited from the presence of the saint for 46 years, until his death. In that long period of time it happened on several occasions that his superiors commanded him to move to other cities, but every time Bernardino was ready to leave something unusual happened that kept him in Lecce. Here he also founded the Church of Jesus, where his body rests, and began a movement of diocesan priests with the aim of improving the knowledge of moral theology and training good confessors and preachers.

On his deathbed, after offering his physical suffering to God for years, he was visited by a delegation from the town hall who asked him extraordinarily to be the protector of the city as soon as he arrived in Paradise. Bernardino nodded his head and died whispering: “Jesus... Mary”. He is often depicted with the Child Jesus because one very harsh evening, on Christmas Eve, while he suffered the freezing cold, Our Lady appeared to him and placed her divine Son in his arms. Among his greatest admirers was St. Robert Bellarmine: “I have never heard a complaint about Father Realino even though I was his provincial; even those who were badly disposed towards the Society and took every opportunity to speak ill of it, always made an exception for Realino... Everyone knows that he is a holy man”. After his beatification by Leo XIII, he was canonized in 1947 by Pius XII, who confirmed him as patron saint of Lecce and lauded his ardour for God and souls.