The search for God as man's first goal and the Benedictine monasteries that have sprung up in every corner of Europe bear witness to the greatness of the work of Saint Benedict (480-547), who with his life glorified the Creator and made a fundamental contribution to the formation of European civilization. 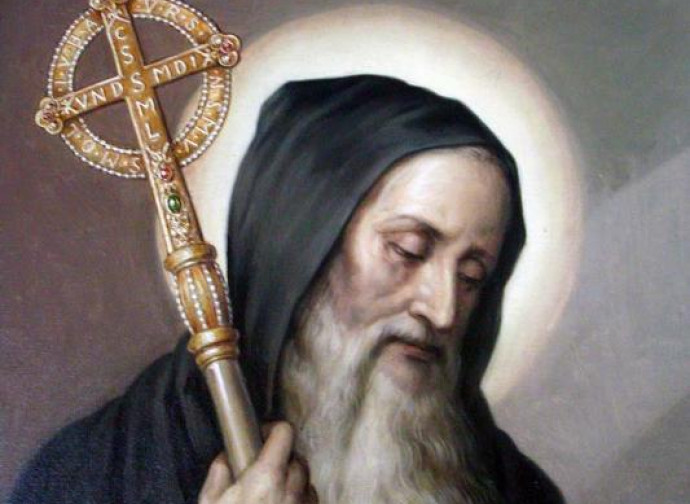 The search for God as man's first goal and the Benedictine monasteries that have sprung up in every corner of Europe bear witness to the greatness of the work of Saint Benedict (480-547), who with his life glorified the Creator and made a fundamental contribution to the formation of European civilization. For this reason on 24 October 1964, consecrating the church of the Abbey of Montecassino, rebuilt after the bombings, Paul VI proclaimed him patron saint of Europe. And he reminded the whole of the Old Continent, in the century of the two world wars and atheistic totalitarianism (Nazism and Communism), that Benedictine history “touches the existence and entity of this old and still vital society of ours, but today so much in need of drawing new sap from its roots, from where it drew its vigour and its splendour, the Christian roots, which Saint Benedict gave so much for and nourished with his spirit”.

Benedict, brother of Saint Scholastica, was born in Nursia around 480, in the midst of the era marked by the barbarian invasions and the fall of the Western Roman Empire. He was a descendant of the noble gens Anicia, the same to whom Pope Gregory the Great (540-604) belonged, who drew on the information of four disciples of the saint to write a famous Life, contained in Book 2 of his Dialogues. As a teenager he was sent by his parents to study literature in Rome. But the discovery of the dissolute life led by many young people (combined with the dangers for the soul that he found in part of worldly knowledge) soon convinced him to leave the city in search of a solitary place, where he could be in meditation with God. After an intermediate stage, the young man reached Subiaco. Here he lived for three years in a cave in total solitude.

That first period in Subiaco marked Benedict's spiritual maturation. He was not spared the assaults of the devil and in particular three great temptations: self-regard, sensuality and anger, which the saint overcame with prayer and penance. He then agreed to act as a spiritual guide for monks who lived in a nearby monastery, but soon left them because they grew tired of his austere discipline and tried to poison him.

In about thirty years he founded 13 monasteries in the Aniene valley. Then came 529, a crucial year in the history of western monasticism, because the saint settled in Cassino and decided this time to build the monastery in a clearly visible place: on top of the mountain. Benedict XVI, taking his cue from the words of Pope Gregory, saw in this choice a symbolic value, linked to the inner development of the patron saint of Europe: “Monastic life in hiding has its own raison d'être, but a monastery also has its own public purpose in the life of the Church and society, it must give visibility to the faith as the strength of life”.

On the hill of Montecassino, Saint Benedict composed his famous Rule, which sets the principle of stability of the place for the monks and collects the best of the ancient monastic tradition, from Saint Pachomius to Saint Basil (whose teachings he explicitly recalled). Therefore Saint Gregory was right to write: “The man of God who shone on this earth with so many miracles did not shine less for the eloquence with which he was able to expose his doctrine”, often summarized with the maxim Ora et labora. Benedict, in fact, admirably marked the day in moments of work and prayer (it was he who codified the Liturgy of the Hours, referring to the words of the psalmist: “Seven times a day I have praised you”); and pointed to the balance between action and contemplation as the way to God. Central is the objective of doing the divine will, through obedience: “I address myself personally to you, whoever you are, who, having decided to renounce your own will, are armed with the strong and valiant weapons of obedience”, he wrote in the prologue of the Rule.

Obedience is due first of all to the abbot, who in the monastery “takes the place” of Christ and must in turn be a tender father and strict master. Thanks to obedience, the soul can progress in the virtue of humility, according to a path divided by the saint into 12 degrees. In Benedict's thought, every activity - from the study of the Word to manual labour - must be directed to the greater glory of God and thus to the conquest of Paradise. “Just as there is a bad zeal, full of bitterness, which separates from God and leads to Hell, so there is a good zeal, which leads away from sin and leads to God and eternal life”.

The thirst for salvation, for himself and for souls, was therefore the polar star of all his life. The vision that Benedict had in his last earthly years is well known, when, while he was watching in prayer, “the whole world was placed before his eyes, almost gathered under a single ray of sunshine”. Pope Gregory commented: “The whole world is said to have gathered before him, not because heaven and earth had shrunk, but because the spirit of the visionary had expanded, so that, enraptured in God, he could without difficulty contemplate what lies beneath God”. It is a gaze, that of Saint Benedict, that Europe is called to rediscover.

Read more: Rule of St. Benedict (in Latin and English)