"Ambrose for bishop!" Who knows how different the history of Milan and its diocese would have been, described for centuries with the adjective "Ambrosian,” without the voice of that child who in 374 shouted the name of the then high imperial official Ambrose (340-397), which was immediately followed by the acclamation of the faithful gathered in the church. 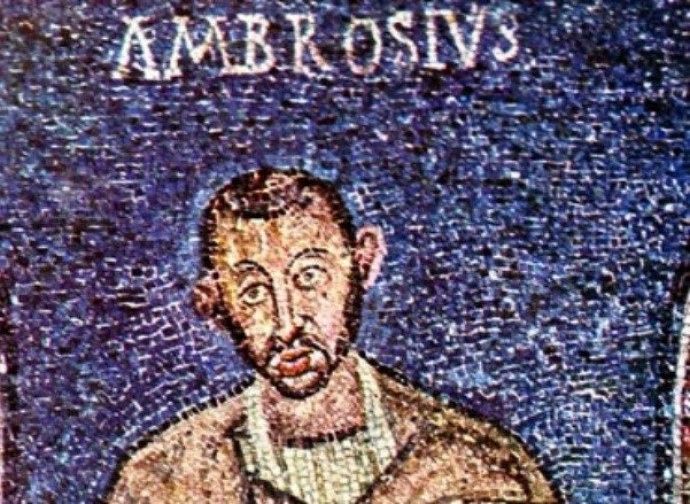 "Ambrose for bishop!" Who knows how different the history of Milan and its diocese would have been, described for centuries with the adjective "Ambrosian,” as well as that of the whole Church, without the voice of that child who in 374 shouted the name of the then high imperial official Ambrose (340-397), which was immediately followed by the acclamation of the faithful gathered in the church. The saint, as told by his secretary and biographer Paulinus, had gone there to settle the spirits of Catholics and Aryans (declared heretics half a century earlier by the Council of Nicaea, but still influential), because at the death of the Arian bishop Auxentius each of the two sides wanted an acceptable successor. Ambrose did all he could, even trying to stain his good reputation, to refuse the position. He was a simple catechumen and did not feel prepared, nor did he see holy orders in his future, but faced with the perseverance of the faithful he finally decided to accept, now convinced that this was the will of God.

With the consecration on December 7, he began his long episcopal ministry destined to leave an everlasting mark on the Church, and which has made him a model for bishops. Ambrose immediately undertook to make up for his theological shortcomings, studying the Holy Scriptures intensely and learning to comment on them through the works of Origen (from whom he borrowed the practice of lectio divina) and of saints like Athanasius and Basil the Great. For Ambrose the Bible is “a sea that contains deep meanings and abysses of prophetic enigmas,” so its reading must be accompanied by prayer and be prayer itself, to concretely assimilate the Word of God in the heart and embody it in one’s own life. “When the stories of the Patriarchs and the maxims of the Proverbs were read, we dealt with morality every day so that, trained and instructed by these, you would become accustomed to entering upon the way of the Fathers and following the path of obedience to the divine precepts,” he taught the catechumens.

This prayerful approach to the sacred texts helped in the conversion of Saint Augustine, who had come to Milan as a skeptic and with the intention of opposing Ambrose, but who always received him amiably and appealed to him with his preaching. But even more than by his discourses, Augustine was impressed by the testimony that the Church gathered as a single body gave in 386, when Ambrose vigorously opposed the decision of Valentinian II (instigated by his mother Justina) to grant a basilica to the Aryans, going so far as to barricade himself inside together with the faithful - with the imperial soldiers outside - and convince the heretics to desist. “The devout people kept watch, ready to die with their Bishop,” wrote Augustine in the Confessions, which clashes with the way certain churches are profaned today. It was in that circumstance that Ambrose, the author of sacred hymns revealing his musical talent, introduced antiphonal singing, one of his numerous contributions to the liturgy, later maintained by his successors as the core of the Ambrosian rite.

He was kind to the lowliest, to whom he had given his possessions at the beginning of the episcopate, and firm with the powerful, even though these were his protectors like the Emperor Theodosius, one of the three to promulgate the Edict of Thessalonica (380 ) with which Christianity was declared the official religion of the empire. Thus, when Theodosius ordered a massacre among the Thessalonian people to avenge the killing of an officer, Ambrose wrote to him that he should do penance, which the emperor did by weeping “publicly in church for his sin.” In his exemplary exercise of the Church’s moral authority he reaffirmed that this had been founded on Peter (“Where Peter is, there is the Church”) and played a decisive role in the defense of Pope Damasus against the attempts of the usurper Ursinus.

For his work to safeguard correct doctrine, which he expounded in various writings, he was proclaimed among the first four great doctors of the Church, together with Augustine, Jerome, and Gregory the Great. He often dwelt on the role of the Blessed Mother in salvation history, exhorting the faithful to imitate her (“in everyone may the soul of Mary magnify the Lord”), beginning with her faith: “If, according to the flesh, there is only one mother of Christ, according to faith all souls engender Christ,” he said in commenting on the Gospel and showing how Jesus was the ultimate end of his theology, of which he gave visible proof even in his last hours on earth: he died at dawn on Holy Saturday, spending the afternoon of the vigil praying stretched out on his bed with his arms open in the form of a cross.

For more information:
- Operosam Diem, apostolic epistle of John Paul II for the sixteenth centenary of the death of Saint Ambrose
- Catechesis of Benedict XVI (general audience of October 24, 2007)