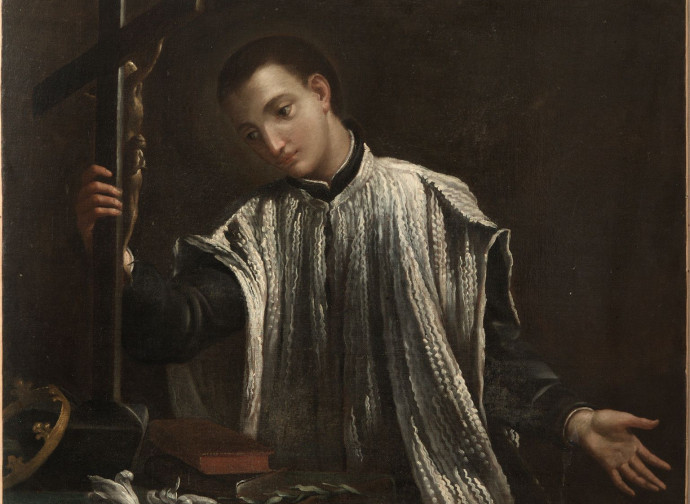 Aloysius, then barely seventeen years old, already had the gaze of a saint, concentrating on the goods that really matter, the eternal ones. He had come to this awareness by nourishing himself with Christian readings, prayers and offerings to God, to whom he asked, through the intercession of the saints and above all of the Virgin, the gift of humility. “This virtue”, wrote the patron saint of young people, “is not born in our land, but must be asked of Heaven”.

He was the first of the eight children of Ferrante Gonzaga, Marquis of Castiglione delle Stiviere (province of Mantua), and Countess Marta di Santena, a woman of great faith. Aloysius was educated from early childhood to military life, revealing a lively character (at the age of four he experienced the thrill of loading and firing cannon...) and a great intelligence. He soon understood the emptiness of the shimmering world in which he was growing up, made of ephemeral things and various vanities. At the age of seven, what he later called his “conversion from the world to God” took place. He recited the seven penitential Psalms and the Office of Our Lady every day. In 1576 his father sent him to the Medici court, in Florence, where he also played with the future queen of France (Maria de' Medici), but he continued along the path he had taken: at the age of 10, in the basilica of Santissima Annunziata, he spontaneously made a vow of perpetual virginity and consecrated himself to Mary, “as she had consecrated herself to God”.

His ardent desire to do the Lord's will was strengthened after his First Communion, which he received from the hands of Saint Charles Borromeo; and it did not fade even during the two years he spent as a page at the court in Madrid, where thanks to his spiritual exercises he developed the idea of entering the Society of Jesus. With the intention of distracting his son from that religious fervour, his father ordered him to take a tour of the noble palaces of Mantua, Parma, Ferrara, Pavia and Turin, hoping perhaps he might fall in love with some beautiful woman of his own age. But young Aloysius was very firm in his choice to give himself totally to Christ. In 1585, with his father by then resigned, he signed the act of renunciation of the marquisate in favour of his brother Rodolfo (who committed crimes, suffered excommunication and ended up being killed). Among the simple people there were those who commented: “We were not worthy to have him as our master. He is a saint and God has taken him from us”.

In the same year he began his novitiate among the Jesuits in Rome. Here they soon realized that they had before them a beloved soul, already trained in penance and prayer (at the age of 12 he had already decided to meditate and pray five hours a day). Some fathers even commanded him to limit that ardour of his, believing that it might harm his health, although he said that contemplation of God had “almost become second nature to me, and I find there peace and rest, not suffering”. Among his theology teachers was St. Robert Bellarmine (1542-1621), who assisted the young man spiritually until his deathbed, promoted his cause for beatification and asked for his own tomb to be next to that of Aloysius. During the drought and the series of infectious diseases that struck Rome in 1590-91, he went around the houses of the nobles to collect alms for the needy and distinguished himself in assisting the sick, in which he saw the very face of Christ.

On March 3, 1591, he came across a plague-ridden man abandoned in the street and did not hesitate to carry him on his shoulders to the hospital. He too caught the plague, but the illness, which led to his death on June 21 (at the age of 23), did not trouble him at all, prepared as he was for the meeting with God: “I'm happy to leave,” he told everyone. In those days he wrote to his mother a letter as a true believer in Christ: “Most illustrious Mother, you must rejoice greatly because by your merit God shows me true happiness and frees me from the fear of losing Him. I will confide to you, O most illustrious lady, that meditating on divine goodness, bottomless and boundless sea, my mind goes astray. I can't understand how the Lord looks at my small and brief toil and rewards me with eternal rest and from Heaven invites me to that happiness which I have so far sought with negligence [...]. O most illustrious lady, beware of offending the infinite divine goodness, mourning as dead someone who lives in the sight of God [...]. And you continue to assist me with your motherly blessing while I am at sea sailing towards the harbour of all my hopes”.