The life of Saint Æthelbert (ca. 560-616) King of Kent, raised as a pagan and first English sovereign to convert to Christianity, came to a turning point when he married Bertha, a devout Christian woman, daughter of the Merovingian king Charibert. 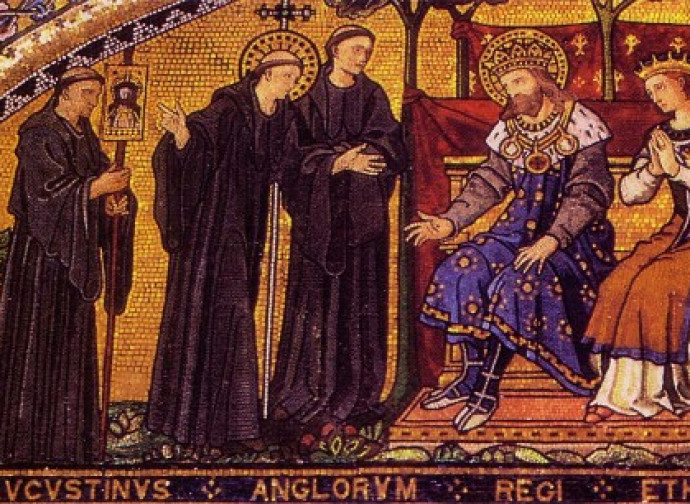 The life of Saint Æthelbert (ca. 560-616) King of Kent, raised as a pagan and first English sovereign to convert to Christianity, came to a turning point when he married Bertha, a devout Christian woman, daughter of the Merovingian king Charibert. As Saint Bede the Venerable (ca. 673-735) writes in his Ecclesiastical History of the English People, Bertha would marry Æthelbert on condition that she could continue to profess her faith in Christ. Thus, Bertha arrived in Britain with Bishop Liudhard (also indicated as chaplain at the Merovingian court) and her virtues must have fostered the gradual conversion of her husband, who reigned over Kent from about 589 until his death. It should be remembered that at the time, as a consequence of the Saxon invasion (5th to 6th century), paganism prevailed in those lands which therefore needed a new, vigorous proclamation of the Gospel announced in the previous centuries.

It was in this context that Æthelbert decided to meet the Italian missionary Saint Augustine of Canterbury (534-604), who arrived in Kent in 597 at the head of some forty Benedictine monks, all sent by Pope Gregory the Great. The first meeting, Saint Bede reports, took place a few days after the arrival of the missionaries, with whom Æthelbert took care to speak in the open air, rather than in some house, "according to an ancient superstition, in case they should practise some magical art". Augustine and his monks arrived with a silver cross "and the image of Our Lord and Saviour painted on a tablet; and intoning litanies, they offered their prayers to the Lord for the eternal salvation of themselves and those to whom they had been sent."

Æthelbert allowed the Christian missionaries to preach and, according to tradition, he converted and received Baptism within a year of that first meeting. Augustine was allowed to found a monastery just outside the walls of Canterbury (today's Abbey of Saint Augustine, whose religious function ceased in 1538, due to the dissolution of the monasteries imposed by King Henry VIII); a church dedicated to the Saints Peter and Paul was also built there. During the reign of Æthelbert, who is indicated in the Anglo-Saxon Chronicle as "Bretwalda" (a term that referred to a monarch ruling over several Anglo-Saxon kingdoms), various other churches arose and thousands of people embraced the Christian faith.

In 604, in response to Augustine's appeal, the missionaries Saint Justus and Saint Mellitus arrived. They became, respectively, the first Bishop of Rochester and the first Bishop of London. In the latter city, Æthelbert had a church built and dedicated to Saint Paul, on the site where the Anglican cathedral of the same name stands today. The king, to whom the first Anglo-Saxon legislative code is owed, died on February 24th, 616, having made a significant contribution to the Christianisation of Britain. He was buried next to his wife Bertha, who had gone to Heaven before him, in the chapel of Saint Martin inside the church of the Saints Peter and Paul in Canterbury, which had been consecrated in 613.