Towards the end of Pentecost, on the fiftieth day after Easter, the Holy Spirit promised by Jesus descended abundantly on the disciples gathered in the Upper Room. Thus began the saving mission of the Church among the peoples of every language and nation. 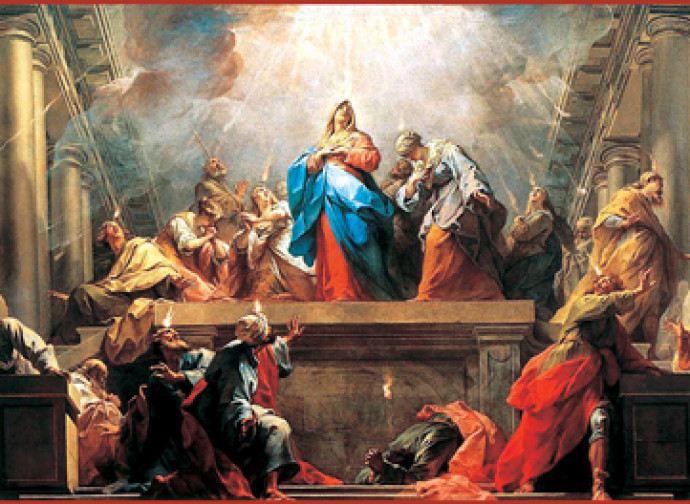 Towards the end of Pentecost, on the fiftieth day after Easter, the Holy Spirit promised by Jesus descended abundantly on the disciples gathered in the Upper Room. Thus began the saving mission of the Church among the peoples of every language and nation. The baptism in the Holy Spirit and fire, which the Baptist had already prophesied by announcing the imminent beginning of Christ's ministry (Mt 3:11-12), was fulfilled with extraordinary signs, described in the Acts of the Apostles: “Suddenly a thunder came from heaven, almost a rushing wind, and filled the whole house where they stood. Tongues appeared to them like tongues of fire, which parted, and they rested on each one of them, and all were filled with the Holy Spirit and began to speak in other tongues, in the way the Spirit gave them the power to express themselves”  (Acts 2:1-11).

The power with which the Holy Spirit descended at Pentecost recalls the signs which accompanied the divine manifestation on Sinai for the handing over of the Law to Moses. Then “there was thunder and lightning” and the mountain “was all smouldering, for upon it had descended the Lord into the fire” (Ex 19:16-19), indicating God's majesty and the one divine plan that links the Old and the New Covenant, the old and the new Israel.

For Pentecost, thousands of Jews had come on pilgrimage to Jerusalem from the most varied nations, and they were astonished to see that the apostles could speak any language: “Are not all of these who speak Galileans? And how is it that we hear them each speak our native language? We are Parthians, Medes, Elamites and inhabitants of Mesopotamia, Judea, Cappadocia, Pontus and Asia, Phrygia and Pamphylia, Egypt and parts of Libya near Cyrene, foreigners from Rome, Jews and proselytes, Cretans and Arabs, and we hear them proclaim in our own languages the great works of God”.

The Jewish Pentecost, corresponding to the “Feast of Weeks” or “harvest festival” spoken of in the Old Testament, was born as thanksgiving to God for the first fruits of the earth. The new Pentecost, at the culmination of the days of intense prayer following the Ascension, manifested instead the first visible fruits of the nascent Church, called to announce the need for conversion to Christ and led by His vicar on earth, Peter. He immediately refuted those who preferred to mock (“they got drunk on must”), rather than accept the signs and convert. And he explained to all the Jews present that the wonders wrought by the apostles were nothing more than a gift from Jesus crucified and risen, and the fulfillment of prophecies. Many believed. On that day alone about three thousand people were baptized, receiving the Holy Spirit and becoming living members of the Church. Mary's maternal mission had already begun, and she was present in the Upper Room with the apostles.

The liturgical celebration of Pentecost, the solemnity that concludes Eastertide, dates back to the apostolic period, as Saint Irenaeus wrote (c. 130-202). At least from the fourth century onwards the custom spread of baptizing on the eve of Pentecost those catechumens who had failed to receive Baptism on Easter night. With the liturgical reform of 1969 the Octave of Pentecost was suppressed, but there is no lack of requests from priests and ecclesial groups asking for its full restoration for the ordinary form of the Roman Rite (in liturgical books the extraordinary form is instead always indicated). Also with this intention one can recite the splendid Come, Holy Spirit (Veni, creator Spiritus). It is a good daily prayer to ask God for a new Pentecost.

and in our hearts take up Thy rest;

come with Thy grace and heav'nly aid,

To fill the hearts which Thou hast made.

O Comforter, to Thee we cry,

Thou heav'nly gift of God most high,

Thou Fount of life, and Fire of love,

and sweet anointing from above.

Thou in Thy sevenfold gifts are known;

Thou, finger of God's hand we own;

Thou, promise of the Father, Thou

Who dost the tongue with power imbue.

Kindle our sense from above,

and make our hearts o'erflow with love;

with patience firm and virtue high

the weakness of our flesh supply.

Far from us drive the foe we dread,

and grant us Thy peace instead;

so shall we not, with Thee for guide,

turn from the path of life aside.

Oh, may Thy grace on us bestow

the Father and the Son to know;

and Thee, through endless times confessed,

of both the eternal Spirit blest.

Now to the Father and the Son,

Who rose from death, be glory given,

with Thou, O Holy Comforter,

henceforth by all in earth and heaven.