“What kind of child will this be?”  (Lk 1:66). Together of course with Mary Most Holy, Saint John the Baptist is the only creature whose nativity the Church solemnly celebrates. It falls six months before the earthly birth of Jesus, the Son of God made man. 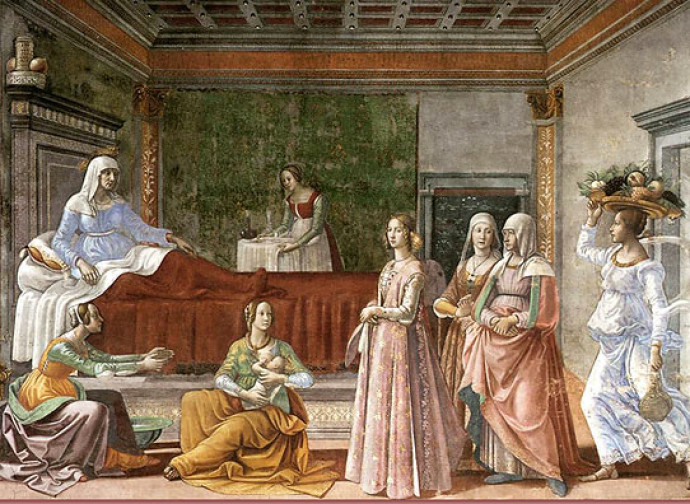 “What kind of child will this be?”  (Lk 1:66). Together of course with Mary Most Holy, Saint John the Baptist is the only creature whose nativity the Church solemnly celebrates. It falls six months before the earthly birth of Jesus, the Son of God made man. The birth of the Forerunner, which according to tradition took place at Ain Karem, is the first public sign of the beginning of Messianic times, preceded by his miraculous conception through the barren Elizabeth and even before the announcement of the Archangel Gabriel to the incredulous Zechariah. The name John, “God had mercy” - whose full meaning will be revealed with the life, death and resurrection of Jesus, “God is salvation” - describes his mission to “make ready a people prepared for the Lord” (Lk 1:17): these were the words used by the archangel himself before Zechariah, who would regain his voice and raise the Benedictus after giving his son (on the eighth day, i.e. at the act of circumcision) the name that had been commanded him by the Divine Will.

As the Fathers of the Church teach, John the Baptist was freed from original sin and sanctified during the Visitation of Mary to Elizabeth, leaping in the womb to the greeting of the Virgin, who bore the Lord within herself. For a good reason St. Gabriel had announced to Zechariah: “He will also be filled with the Holy Spirit, even from his mother’s womb” (Lk 1:15). Thus it pleased Providence for the man called to be the prophet of the Most High, the one who - clothed in the spirit of Elijah - prepared the way for Jesus by preaching a baptism of repentance for the forgiveness of sins. His public activity began around 27-28 A.D., based on the detailed historical and religious framework provided by the evangelist Luke (Lk 3:1-3). Through his ministry, which began after strengthening his spirit in deserted regions by living in prayer and penance, he became the link between the Old and New Testaments.

The Baptist was the last and greatest of the prophets, for he was the only one who could point to the Messiah: “Behold! The Lamb of God who takes away the sin of the world!” (Jn 1:29). That Messiah was Jesus himself, on whom John, at the moment of Baptism in the Jordan, saw the Holy Spirit descend and remain, according to the sign that had been foretold to him from heaven to recognize him who was to come: “And I have seen and borne witness that this is the Son of God”. The saint, who had said of himself that he was the voice of one who cries out in the desert (evoking a prophecy of Isaiah on the Forerunner), thus testified to the divinity of Jesus, affirming with joy and humility that his mission had reached its climax and that the time of the Bridegroom had come: “Now this joy of mine is fulfilled. He must grow and I must diminish”. Jesus in turn bore witness to him, calling him “more than a prophet” and proclaiming his greatness: “I tell you, among those born of woman there is no one greater than John”.

The celebration of the birth of Saint John the Baptist on 24 June has very ancient origins, as witnessed among others by Saint Augustine (354-430). His birth, based on the Gospel account and archaeological findings, is linked to the full historical plausibility of the date of Christmas on 25 December. In one of his speeches on the occasion of the solemnity, the holy bishop of Hippo, referring to the role of the Baptist in the history of salvation, said: “The releasing of Zechariah’s voice at the birth of John has the same significance as the tearing of the veil of the Temple at the crucifixion of Christ. If John were meant to proclaim himself, he would not be opening Zechariah’s mouth. The tongue is released because a voice is being born – for when John was already heralding the Lord, he was asked, Who are you? (Jn 1, 19). And he replied I am the voice of one crying out in the wilderness (Jn 1, 23). John is the voice, but the Lord in the beginning was the Word (Jn 1, 1). John is a voice for a time, but Christ is the eternal Word from the beginning”.