It was Saint John Bosco who famously did most to propagate devotion to Our Lady with the title of Mary Help of Christians. However, the direct reference to the help given by Mary to her children was already widespread in Greek-speaking Christianity in the early centuries... 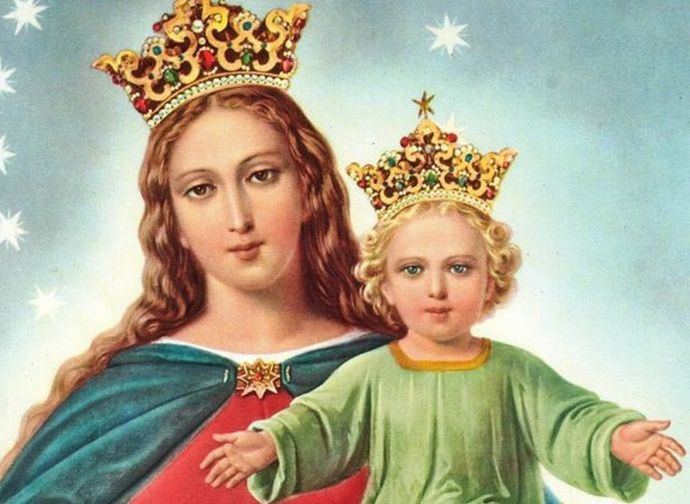 It was Saint John Bosco who famously did most to propagate devotion to Our Lady with the title of Mary Help of Christians. However, the direct reference to the help given by Mary to her children was already widespread in Greek-speaking Christianity in the early centuries. This is shown by ancient inscriptions in which the Blessed Virgin - besides famous titles such as Theotókos (Mother of God) and Panaghia (All Holy) - was invoked as Boetheia, which means “help”. Saint John Chrysostom thus referred to the heavenly Mother in a homily in 345. And several other saints of the first millennium invoked her with this name, for instance, Germanus I of Constantinople (c. 634-733), who said: “We, having turned away from God in the multitude of sins, through you have sought God and found Him; and having found Him, we have been saved. Therefore mighty is thy help for salvation, O Mother of God”.

Following the victorious battle of Lepanto on 7 October 1571, which led St. Pius V to institute the feast of Our Lady of Victory (today Blessed Virgin Mary of the Rosary), the invocation Auxilium christianorum, “Help of Christians”, was included in the Litany of the Blessed Virgin Mary. More than two centuries later, on 15 September 1815, Pius VII established the celebration of the feast of “Mary Help of Christians” on 24 May, the anniversary of his triumphant return to Rome (24 May 1814) after almost five years of imprisonment under Napoleon. Originally the feast, already widespread among the Servants of Mary since the 17th century, was limited to the diocese of Rome. But then it spread to other places of Christianity, though without being included in the General Roman Calendar.

Don Bosco was barely thirty years old when in 1845 the Virgin appeared to him in the Turin district of Valdocco (place-name that traditionally stands for Vallis occisorum, “Valley of the Killed”). And here she ordered him to build a church on the exact spot of the martyrdom of Saints Adventor and Octavius, two soldiers of the 3rd century, considered to be the first martyrs of Turin and celebrated together with their comrade-in-arms Saint Solutor (beheaded a few kilometres away). “In this place - Our Lady said - where the glorious martyrs of Turin Adventor and Octavius suffered their martyrdom, on these clods that were bathed and sanctified by their blood, I want God to be honoured in a very special way”. While she was saying these words, transcribed by Don Bosco in his Memoirs, Mary “put her foot forward onto the place where the martyrdom took place and pointed it out to me precisely”. Twenty years later the first stone was laid. And on 9 June 1868 the consecration of the Sanctuary of Mary Help of Christians took place.

The holy educator commissioned Tommaso Lorenzone to paint the altarpiece for the high altar. This painting shows Mary with the Child Jesus in her left arm and the sceptre - topped with a small globe surmounted by the cross - in her right hand. Around them are the apostles, the evangelists and angels, and above them the irradiation of the Holy Spirit, represented by a dove. The image received canonical approval in 1903, under Leo XIII, through Archbishop Agostino Richelmy.

The title of Help of Christians was then reported in Lumen Gentium, the dogmatic constitution of the Second Vatican Council on the Church, which emphasized Mary's special cooperation in the Redemption brought about by her divine Son: “This maternity of Mary in the order of grace began with the consent which she gave in faith at the Annunciation and which she sustained without wavering beneath the cross, and lasts until the eternal fulfilment of all the elect. […] Therefore the Blessed Virgin is invoked by the Church under the titles of Advocate, Auxiliatrix, Adjutrix, and Mediatrix” (Lumen Gentium 62).