The day after the Solemnity of the Sacred Heart of Jesus, the Church celebrates the liturgical commemoration of the Immaculate Heart of Mary, awaiting with firm hope the fulfilment of the promise made by the Heavenly Mother to the three little shepherds of Fatima: “Finally, my Immaculate Heart will triumph”. 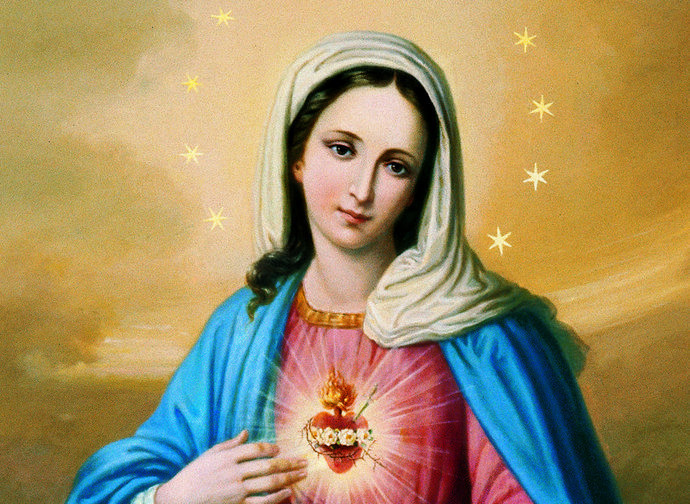 The day after the Solemnity of the Sacred Heart of Jesus, the Church celebrates the liturgical commemoration of the Immaculate Heart of Mary, awaiting with firm hope the fulfilment of the promise made by the Heavenly Mother to the three little shepherds of Fatima: “Finally, my Immaculate Heart will triumph”. This triumph will be the prelude to peacetime “for those who say yes to my Son”, before the last eschatological battle that will end with the second, definitive and glorious advent of the Lamb, Our Lord Jesus Christ, as prophesied by Saint John the Evangelist in Revelation. The Mother and the Son, therefore, whose Sacred Hearts are so intertwined and perfectly united in the same mystery of salvation that they cannot be separated. This was already taught by Saint John Eudes (1601-1680), founder of the Congregation of Jesus and Mary, who was the first to celebrate the feasts of the Sacred Heart and the Immaculate Heart with his confreres.

Jesus' revelations to Saint Margaret Mary Alacoque (1647-1690) were the most powerful impetus to devotion to the Sacred Heart, which spread despite the hostility of the Jansenist heresy.  The establishment of the cult to the Immaculate Heart of Mary, which also had to overcome various obstacles, came about through some of the greatest Marian manifestations in history. For instance, the apparition of 27 November 1830 to Saint Catherine Labouré, who after contemplating the radiant figure of the Immaculate, saw the Sacred Hearts of Jesus and Mary appear, the first crowned with thorns, the second pierced by a sword, as well as an M intersected by the I of Iesus and surmounted by a cross, surrounded by 12 stars. It is the image that became famous with the diffusion of the Miraculous Medal, the extraordinary compendium of symbols scattered in all the Holy Scriptures and that recall in particular Mary's participation in the redemptive work of her Son. This admirable participation, which makes Mary the Co-Redemptrix, is already implicit in God's words to Satan immediately after the original sin (Gen 3:15); it is then expressed in Simeon's prophecy (“And a sword shall pierce your soul too”; Lk 2:35) and culminates in the magnificent sign of the Woman clothed with the sun (Rev 12).

This divine plan, in which pain acquires meaning and becomes one with Love, continued with Fatima. Here, on 13 June 1917, Our Lady communicated to little Lucia dos Santos (1907-2008) her mission: “Jesus wants to use you to make me known and loved. He wants to establish in the world devotion to my Immaculate Heart. On 10 December, eight years later, Lucia, already in the convent, saw Mary and the Child Jesus at her side, who said to her: “Have compassion on the Immaculate Heart of your Most Holy Mother, covered with the thorns that ungrateful people inflict on it at all times, without anyone making an act of reparation to remove them”. It was then that the Virgin made Lucia the solemn promise on the reparative Communion of the five Saturdays: “To all those who for five months, on the first Saturday, will go to confession, receive Holy Communion, recite the Rosary and keep me company for 15 minutes meditating on the Mysteries, with the intention of offering me reparations, I promise to assist them at the hour of death with all the graces necessary for salvation”.

In 1944 the liturgical commemoration was extended by Pius XII to the whole Church, in memory of the consecration of the world to the Immaculate Heart of Mary, made two years earlier by the same pontiff at the invitation of Blessed Alexandrina Maria da Costa. The celebration, initially established on August 22, in the Octave of the Assumption, was moved to the present day (the first Saturday after the Sacred Heart of Jesus) in the 1969 reform, with the degree of optional commemoration, which was later changed to obligatory by St. John Paul II. The liturgy reminds us that Mary, Seat of Wisdom, meditated in daily silence on the Divine Will and “kept all these things in her heart”. The Heavenly Mother has supported every inspiration of Grace. Precisely for this reason it is necessary to imitate her and fight at her side against evil, so that she and her Son can reign - as Saint Maximilian Mary Kolbe said - “in every heart that beats on earth”. In view of eternal glory.

The devotion of the five first Saturdays of the month

Act of personal consecration to the Immaculate Heart of Mary