"If the doctors say that Tafida could live for another 20 years and I say that I am happy to sacrifice my career to look after my daughter, why are the doctors trying to stop me? Just because she is disabled? " Shelina Begum is the mother of the little English girl living in a state of minimal consciousness at the Royal London Hospital which wants to switch off her life-support and prevent her from being transferred to the Gaslini hospital in Genoa. She was interviewed by the Bussola and launches an appeal to all religions to unite and fight for the disabled. Today marks the beginning of the week, according to the last hearing, when Judge MacDonald will issue his  ruling on Tafida’s life. 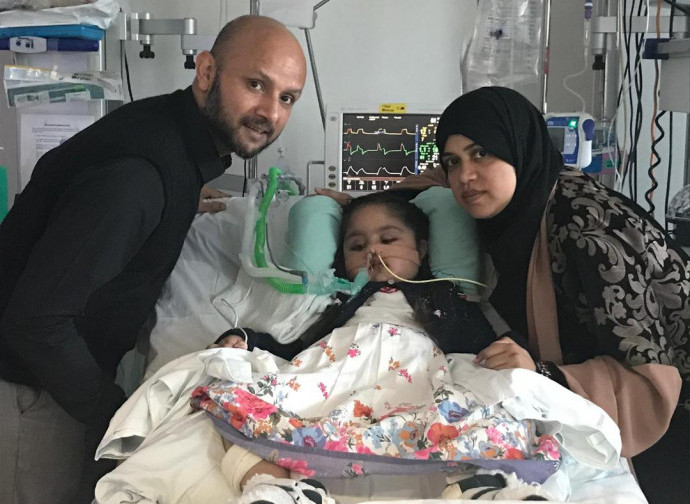 "What I want to say is that the whole world, all religions should come together to fight against the situations that target the disabled. Surely they can't do this. They cannot end a person's life like this.” Shelina Begum answers sadly on the phone; she is Tafida Raqeeb's mother, the 5-year-old English girl admitted to the Royal London Hospital after a brain haemorrhage on February 9.

These are decisive hours for the child’s life, given that today is the start of the week when judge Alistair MacDonald, according to the announcement at the conclusion of the last hearing before the High Court (9-13 September), will make his decision known. Two opposing cases have been examined by the British court. On one hand, there is the family‘s request to continue Tafida’s medical treatment and to transfer her to the Gaslini Children’s hospital in Italy which agreed to take her some time ago. On the other hand, there is the case of the Royal London Hospital (headed by Barts, a trust of the British health service), which wants to remove the ventilator that helps Tafida to breathe and refuses to grant the transfer.

Vikram Sachdeva, the lawyer who represents the child's interests (family member), together with his colleague David Lock (parents' lawyer), have insisted on upholding the right to free movement in the European Union. For its part, the National Health Service -  is acting in line with other UK healthcare facilities where State euthanasia was applied to Charlie Gard, Isaiah Haastrup and Alfie Evans - continues to claim that Tafida's "best interest" is to die. In order to    facilitate this objective, they tried in vain, just a few days before the hearing began, to wrest Tafida's legal representation from the family, claiming that the latter - by reason of their Islamic faith - would not be able to represent the child’s interests.

The parents, Mohammed, a building-consultant, and Shelina, a lawyer, both of Bengali origin, seek help in the battle for their daughter’s life: prayers, economic support for their legal expenses (an ad hoc page was created for fundraising) and to spread Tafida‘s story, which affects children and disabled people around the world. The Bussola interviewed Shelina.

Shelina Begum, how is Tafida?
Tafida is doing well and making progress, as can be seen from the videos on our Facebook page “Save Tafida.” I hope the judge will let her go to Italy and give her the opportunity to continue living.

And how are you and your husband?
You know, Tafida was a healthy lively little girl before all this happened. For us, as a family, we feel like we are dying every day for what she is going through and for the idea that the doctors want to switch off her life support: this kills me, it destroys me. She is my child, we are ready to pay all the expenses for her transfer, so why are they preventing her from going?

Do you believe that the UK has lost its sense of the value of life?
I think so and they are continuing to lose it. I have always been happy in the UK, we are the third generation, but I am indignant about what is happening in the National Health Service (NHS, the British health service, ed). No value is given to disabled people, disabled children. They are seen as a burden on the state. The value of life has been lost and I think they will continue to lose it. It is only a matter of time before the draft law on euthanasia passes.

As a mother you are suffering every day. But you are also a woman of hope: where does this hope come from?
From Tafida, my daughter. She gives me hope. She's fighting to live, she gives me hope.

Are you receiving any help from the Muslim and Christian communities in this battle?Yes, from them and also from the Jews and many others. The campaign for Tafida's life is growing at the moment. Tafida has faith too and those who want to remove her life-support are also attacking religion. Therefore, I want to say that the whole world, all religions should unite to fight against situations like this one that targets the disabled. They really can't do that. They cannot end a person's life like this.

Do you believe that what is happening, the fact that this is about a vulnerable life, also reflects a loss of faith in general?
In the United Kingdom today, there is very little faith. People are losing their faith.

How confident are you about the sentence?
Yes, I am very confident: my lawyers have said that the Tafida’s case is very unusual in the UK, that it should never have gone to the courts because these doctors have said that she could live for 20 years. The doctors say her condition may not improve but that she could live for 20 years. But they still want to end her life. So, if she can live like this for 20 years and I say I'm happy to sacrifice my career, my life, to take care of my daughter, why do they want to prevent it? Tafida continues to improve every day, but even if she does remain disabled why should I end her life? Just because she is disabled? Certainly killing her is not in her “best interest.”

Tafida's campaign follows those of other little children, Charlie, Isaiah and Alfie. In order to prevent their cases being used as a judicial precedent, your lawyers are emphasising the particular differences, such as the different life expectancy.
Yes. Our case is the fourth well known case ... but I'm sure there are many other children in similar situations. We have to fight for them too. Tafida will rewrite the history of the UK.

(With the collaboration of Patricia Gooding-Williams)