Women playing priests, rainbow flags hanging from the altar, a punk-styled statue of Our Lady. Following a Vatican 10 May statement forbidding the blessing of homosexual unions, now forbidden preaching and blasphemous Masses are taking place in Germany. In some of the country's most prominent churches, 12 women are now preaching, a clear numeric reference to the first apostles. The Daily Compass has gathered evidence from a “Mass” held in Essen, proof that an abomination of desolation currently underway in Germany. Meanwhile, has Rome turned a blind eye? 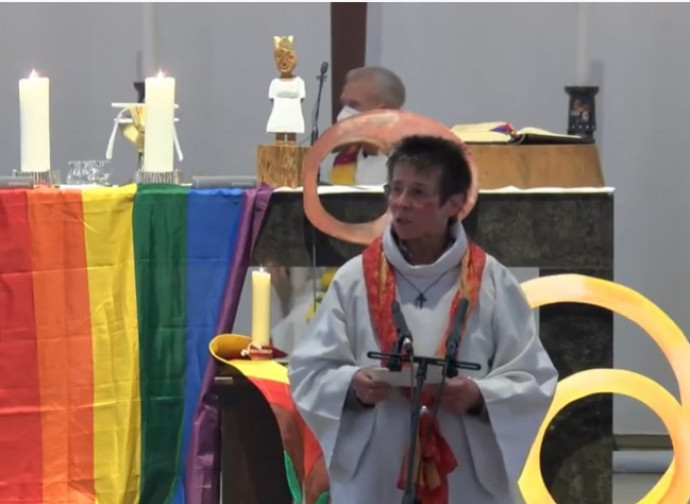 Women acting like priests, rainbow flags hanging from the altar, a punk-looking statue of Our Lady. On 15 May, an episode of "The Abomination of Desolation" was aired via live stream and in a place where it is “unlawful” (cf. Mk 13:14) to do so at Cologne’s St. Elisabeth Church. To understand the deeper significance of what had happened, let us return to the year 167 B.C. when Antiochus Epiphanes entered the Temple of Jerusalem. It was then and there that the Greek king ordered an altar be dedicated to Jupiter Capitolinus in place of the Altar of Holocausts and sacrificed an impure animal, most likely a pig. According to other historical accounts, it was not the altar but the statue of the pagan deity that was brought into the Temple of Jerusalem. In any event, an idol was introduced “where it is not lawful” inside the Temple’s inner court (the location of a bronze altar), a sacred space accessible only to priests and reserved for performing sacrificial offerings.

Jesus recalled an episode prophesied by Daniel (cf. Dn 9: 27) when he suggested to his disciples that  "those who are in Judea [should ] flee to the mountains.” Jesus then goes on to say, “Let no one on the housetop come down to retrieve anything from his house. And let no one in the field return for his cloak." (Mt 24: 17).  St Jerome describes the “Abomination of Desolation” as the time when "an image of Caesar was placed by Pilate inside the temple" and when "the equestrian statue of Hadrian was placed, which has remained until today, where Holy of Holies is” found. Jerome specified that "according to Ancient Scripture, an ‘abomination’ is also called an ‘idol’ (and this is why "of desolation" is added to the term “abomination”), because an idol had been placed in the desolated and destroyed Temple."  (cfr Commentary on Matthew, 4: 24,15). Jesus’ words do not only refer to the events that took place in temporal proximity to Daniel’s prophecy, but offer a glimpse into the future end times.

We remind our readers that what happened on 10 May in Germany, the day on which some priests (for now only male priests) and ministers (read here) re-enacted the infamous "papal slap in Anagni" by openly blessing unions of all sorts and kinds. If this is not an “abomination,” it certainly comes close.

Following the forbidden blessings, illicit preaching ensued in line with an initiative promoted by  the Katholische Frauengemeinschaft Deutschlands (Catholic Women's Community of Germany) called "12 Frauen, 12 Orte, 12 Predigten" (12 women, 12 places, 12 sermons, read about it here). The twelve churches involved not those of some far off villages, since counted among them is the prestigious Cathedral of Essen where Ms. Ulrike Fendrich preached last 16 May. The Essen Cathedral is the seat of Bishop Franz-Josef Overbeck who had previously stated he would not take any punitive action against priests who had decided to bless gay couples during acts of public disobedience on 10 May.

However, if in Essen the woman preacher was playing comfortably on her home turf, at Cologne's St. Elisabeth Church, Cardinal Rainer Maria Woelki was openly challenged. Here, on 15 May, and again on18 May,  "where it is improper to do so" just about everything “improper” took place (watch the entire video of the celebration). Inside the St. Elisabeth Church, a rainbow flag is seen hung from the altar. Then there was Ms. Marianne Arndt who dressed up like a priest and began preaching during the celebration that was supposedly a "Mass", although they did everything possible to confuse observers (listen to the "Sanctus", for example, from minute 39:15) It didn't take all that much to make Arndt look like a priest, since the actual priest only wore  a simple white alb together with a multi-coloured stole. The "priestess" was also dressed in a white smock and wore a yellow-red scarf worn like a stole. She then decided to remain the entire time in the presbytery (the part of the church reserved for the “presbyter”, i.e. the priest!) while effectively preaching, distributing communion (obviously with protective gloves) to the small group of faithful present. During the celebration, another female minister led some sort of callisthenic stretching routine for the elderly (see from 57:00), which, according to the organizers, was meant to be a form of liturgical dance. The worst of all was the veritable blasphemy that took place. This involved a statue placed in the presbytery, to the left of the altar, said to represent Mary. Whether or not the statue was actually intended to be punk or drag queen version of Our Lady, perhaps we will never know for sure. The statue was an image of a girl wearing tight jeans worn below the waist,  with a black studded belt, black knee-high boots, a bald head with a horrible red mohawk-looking crest. Yes, that’s right, she was the picture-perfect image of the Blessed Virgin! Arndt, during her “homily,” also made some blasphemous humorous references, asking the faithful to imagine how Mary must have felt as she unwittingly became pregnant right before her wedding.

Afterward, Arndt gave an interview to Arte Journal (read here) in which she admitted  she was tired of Rome's “fossilized” positions which continue to discriminate against women. She said they are policies that must be reversed, obviously in the name of love, to bring the Church out of its state of hibernation. Ergo, the female minister had decided to do it her own way, without waiting for further Roman delays in order to help, as she said, "evolve canon law on this point, on sexual morality, and other [relative] aspects."

This is what we usually call a "schism." The other episode involving the obscene statue is pure blasphemy. The entire celebration involved a form of liturgy that goes beyond all limits of acceptance. Hey, knock, knock, is anyone in Rome paying attention? Are our Church leaders turning a blind eye to what should be judged intolerable, while they continue to deprive faithful of simple requests to receive the Eucharist on the tongue and others of sacraments simply because they won’t pay the “kirchensteuer” church tax? Just curious...