Cardinal Kung, heroic defender of the religious freedom in China

Here it is the sermon of Cardinal Raymond Leo Burke for the Pontifical Requiem Mass celebrated in Stamford (Connecticut) for the eternal rest of Cardinal Ignatius Kung Pin-Mei in observance of the 20th anniversary of his death on March 12, 2000. 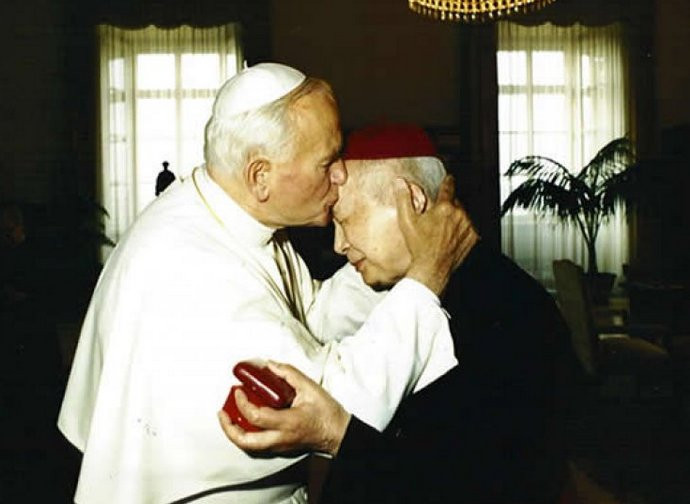 Twentieth Anniversary of the Death of Ignatius Cardinal Kung Pin-Mei

Basilica of Saint John the Evangelist

It is a great honor and a source of deepest joy for me to offer the Pontifical Requiem Mass for the eternal rest of Cardinal Ignatius Kung Pin-Mei in observance of the 20th anniversary of his death on March 12, 2000. It especially pleases me to offer the Pontifical Mass in this magnificent Basilica of Saint John the Evangelist, in which Cardinal Kung’s Funeral Mass was offered on March 18, 2000.

I express my heartfelt gratitude to Mr. Joseph M. C. Kung, President of The Cardinal Kung Foundation, and to Agnes Y. H. Kung, Director of Programs of the Foundation, for the invitation to offer the Pontifical Requiem Mass. I am deeply grateful to His Excellency, Bishop Frank Joseph Caggiano, Bishop of Bridgeport, and to Monsignor Stephen M. DiGiovanni, Pastor of the Basilica of Saint John the Evangelist, for their heartfelt welcome. As I offer the Holy Mass for the eternal rest of the most beloved and venerated Cardinal Kung, I am praying, in a particular way, for the persecuted faithful of the Roman Catholic Church in China, for whom Cardinal Kung was always a totally faithful shepherd. Through the work of The Cardinal Kung Foundation, priests, religious Sisters and Brothers, and lay faithful of the underground Church in China know of the offering of the Holy Mass today and are spiritually united with us through their prayers.

The reading from the Second Book of Maccabees reminds us of the twofold meaning of the offering of the Requiem Mass. The Requiem Mass is, first and foremost, the expression of our faith in the Resurrection of the Body, “the splendid reward that is laid up for those who fall asleep in godliness.”[1] The noble and courageous Judas Maccabeus took up a collection for the members of his army, who had fallen in battle to defend the religious freedom of the people: to safeguard their right to offer worship to God alone and to defend them against the government’s oppression which would force them to commit the most grievous sin of worshipping idols. The Holy Mass today is offered for the eternal rest of an heroic defender of the religious freedom of his people. Cardinal Kung’s defense of the most sacred covenant of his people with Our Lord Jesus Christ Who alone is the Savior, the King of Heaven and Earth, remains a model and inspiration for us yet today. The Holy Mass is offered for the eternal rest of the soul of Cardinal Kung because we know by faith that God rewards with eternal life, with the Resurrection of the Body, those who have served Him faithfully.

The Requiem Mass is, likewise, offered for the dead “that they might be delivered from their sin.”[2] In the case of the deceased soldiers for whom Judas Maccabeus sent a “sin offering”[3] to Jerusalem, a serious sin was evident: they were carrying under their tunics “sacred tokens of the idols of Jamnia.”[4] Honoring the sacred bond of faith in God, which Judas and the survivors of the battle had with those who had died in battle, a bond which endures, in virtue of the truth of the Resurrection, the survivors made the sin offering as an act of love for their deceased brothers, assisting them to be delivered from their sin and the punishment it necessarily entailed. In our love for the dead, even if we are not conscious of any sin which they may have committed, we, because we ourselves are sinners, offer sacrifice, so that whatever sins they may have committed may be forgiven, together with the remission of the temporal punishment due to their sins. The Requiem Mass is a supreme act of continuing love for those whom we have loved in this life and whom God has called to Himself through death.

Our Lord Jesus Christ confirmed the faith in the Resurrection of the Body, expressed by Judas Maccabeus. What is more, He confers upon the faithful the grace of Resurrection through His own Passion, Death, Resurrection, and Ascension to the right hand of the Father. From the moment of Baptism, the faithful are called to share in Christ’s Resurrection from the Dead. Every time the faithful are blessed to receive Holy Communion, the gift of eternal life through the indwelling of the Holy Spirit, poured forth into their hearts from the glorious pierced Heart of Jesus, is nourished. They receive the pledge of eternal glory.

It should not surprise us that Christ teaches us about the Resurrection of the Body within His teaching on the Bread of Life, on the Holy Eucharist. Declaring that His own will is perfectly one with the will of the Father Who sent Him in our human flesh to save us from sin and to win for us eternal life, Christ teaches us:

For I have come down from heaven, not to do my own will, but the will of him who sent me, that I should lose nothing of all that he has given me, but raise it up at the last day. For this is the will of my Father, that everyone who sees the Son and believes in him should have eternal life; and I will raise him up at the last day.[5]

We offer the Requiem Mass today for the eternal rest of Cardinal Kung with faith that Christ Whom the Cardinal so faithfully served, especially during his long years of imprisonment and through the suffering of unrelenting persecution at the hands of the communist government of his homeland, will raise up his earthly remains to the perfection of eternal life on the Last Day.

In honoring the memory of Cardinal Kung and in expressing our deepest love for him as a true shepherd of the flock, after the Heart of Christ the Good Shepherd, we cannot fail to pray fervently that the faithfulness of his love of Christ in the Church may inspire the shepherds of the flock today, especially in China but also in the whole world. Cardinal Kung would not permit that the Church in China be placed under any government than that of Christ and of His Vicar on earth, the Pope. He knew that the divine truth and love which Christ never ceases to communicate to His brothers and sisters in the Church comes only through the Apostolic Tradition which all the faithful, and, in a preeminent way, the Roman Pontiff and the Bishops in communion with him, together with their co-workers, the priests, must ever foster and defend, at the cost of indifference, ridicule, persecution and even execution.

Today, as has happened in the past, there are those who would make the Church a national entity, that is, who would put the Church, in some way, under the governance of the nation or a national body, even a national group of Bishops. Within the Church herself, there are those who claim that national or regional conferences of Bishops have, for example, doctrinal authority. Doctrine thus no long addresses the one truth of the faith but becomes relative to the thinking of the majority of the Bishops in a nation or region.

But the Church is governed by Christ alone Who is her Bridegroom, her Head and Shepherd, according to the constitution which He divinely gave to her during His public ministry and through His saving Passion, Death, Resurrection and Ascension. The Church is patriotic, according to the divine law written upon every heart, because she teaches her members to worship God alone and to put divine worship into practice by obedience to the moral law, including the honor due to one’s parents and to one’s homeland. The Church is patriotic, but there is no such thing as a patriotic Church in the sense that the Church is an entity of the nation and subjects herself to governance by the nation. When the then Bishop Kung was brought before a mob in Shanghai, some months after his arrest on September 8, 1955, to make a public confession of his so-called crimes, he simply proclaimed: “Long live Christ the King. Long live the Pope.”[6]

In a similar way, as Cardinal Kung understood so well, the Church cannot make a covenant with a government which is atheistic in its founding principles and which, in fact, worships itself alone. With such a government, the Church can only continue to give steadfast witness to the faith and accept inevitable suffering and even martyrdom at the hands of those who would eradicate any sign of faith in God from the nation. Even as we pray for the eternal rest of Cardinal Kung, we know that he does not cease to love and pray for his homeland and, above all, for his Catholic brothers and sisters in China.

In a particular way, we confide to his love and prayers his brother Cardinal Joseph Zen Ze-kiun, a true shepherd today for the Catholics in China who remain faithful to Christ and who suffer the persecution of the atheistic communist government of China. Cardinal Zen, together with so many confessors of the faith, like Cardinal Kung, and martyrs for the faith, over the 70 years since the founding of the People’s Republic of China and its unrelenting persecution of the Roman Catholic Church, has understood the truth professed by Cardinal Kung, when he was offered freedom in exchange for denial of the authority of the Holy Father and in exchange for his leadership of an independent Church in China:

I am a Roman Catholic Bishop. If I denounce the Holy Father, not only would I not be a Bishop, I would not even be a Catholic. You can cut off my head, but you can never take away my duties.[7]

Thanks be to God that Cardinal Zen and so many Catholics in China understand their identity in Christ and are willing to suffer, in order to be true to Him, in order to fulfill their duties of pure and selfless love of God and of their neighbor.

Let us now lift upon our hearts, one with the Immaculate Heart of Mary, Our Lady of SheShan, Queen of China, to the glorious pierced Heart of Jesus, opened for us in the Eucharistic Sacrifice by which He makes sacramentally present for us His Sacrifice on Calvary. Let us lift up, with our hearts, prayers for the eternal rest of Cardinal Ignatius Kung Pin-mei and for the Church in China, for which he gave his life. Let us confide the soul of Cardinal Kung and the souls of so many suffering brothers and sisters in China to the unfailing font of Divine Mercy and Love, which is the Eucharistic Heart of Jesus. Long live Christ the King! Long live Our Lady of SheShan! Long live the Vicar of Christ on earth!