As his human nature was united with his divine one, even Jesus needed to be educated. Under the guidance of Mary and Joseph, the Son of God made man was able to grow “in wisdom and stature, and in favour with God and man”. In particular, St Joseph had to perform the duties of a father, such as instructing Jesus in the Law and in a trade while integrating him into social life. Thus he and the Virgin emerge as “models for all educators” (St John Paul II). 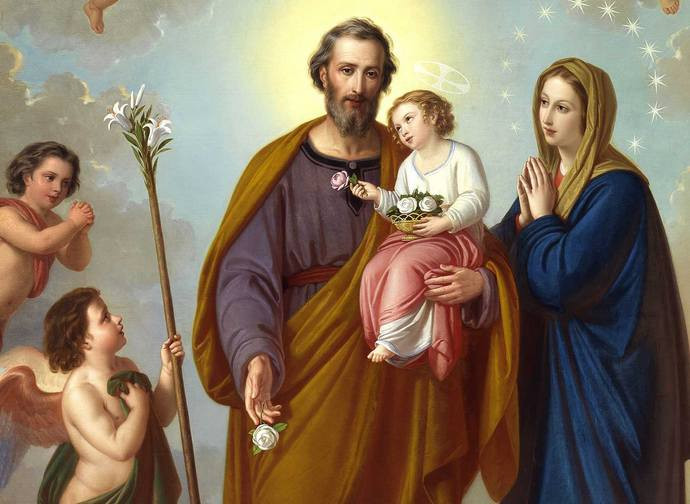 With regard to the fatherhood of St Joseph, it is worth returning to an aspect that is neglected today but which is fundamental: education. In the hedonistic society in which we live, a double error is spreading (but with identical cultural roots), which consists on the one hand in claiming a “right to a child” and, on the other, not caring about the child’s education. This second error, in turn, can take the form either of a complete lack of commitment to education or of a bad education, not oriented towards the divine will.

The example of Mary's spouse, on the other hand, serves us once again as the North Star. “The Holy Spirit has honoured St Joseph with the name of father”, as Origen wrote, because he educated Jesus. His merits are evident. Even in the absence of biological generation, because of the singularity of Jesus, St Joseph welcomed that Son as a gift. The glorious patriarch, together with Mary, also ensured that their marriage reached, in the words of St Thomas Aquinas, “that perfection that relates to the education of offspring”. In fact, the Doctor Angelicus explained that “nature does not intend only the generation of offspring, but their development and promotion to the perfect state of man”. Therefore, offspring “entail not only their procreation, but also their education, to which all the mutual activity of husband and wife is ordered...”. And what upbringing has ever surpassed that of the Son of God made man?

The Gospels do not recount many details about the upbringing of Jesus by Mary and Joseph, but they do inform us that the couple took care to transmit to the Child the religious rites of the chosen people (circumcision, presentation at the Temple, the celebration of the Passover in Jerusalem...) and they emphasise his ready submission to his parents. In particular, focusing on the role of St Joseph, the Apostolic Exhortation Redemptoris Custos recalls: «The growth of Jesus "in wisdom and stature, in favour with God and man" (Lk 2:52) took place within the Holy Family under the eyes of Joseph, who had the important task of "bringing up" Jesus, that is, feeding, clothing and educating him in the Law and in a trade, in keeping with the duties of a father».

The education of Jesus was necessary in order to realise the plan that the eternal Father had for Him and is based on the coexistence of the two natures, the divine and the human (which is the prerequisite for any educational work), in the one Person of the Son of God.

The Catechism devotes a specific section to this fascinating subject (“The soul and the human knowledge of Christ”, CCC 471-483). On the one hand, «by its union to the divine wisdom in the person of the Word incarnate, Christ enjoyed in his human knowledge the fullness of understanding of the eternal plans he had come to reveal» (CCC 474). At the same time, point 472 teaches: «This human soul that the Son of God assumed is endowed with a true human knowledge. As such, this knowledge could not in itself be unlimited: it was exercised in the historical conditions of his existence in space and time. This is why the Son of God could, when he became man, "increase in wisdom and in stature, and in favour with God and man" (Lk 2:52) and would also have to inform himself about what in the human condition can only be learned through experience [cf. Mk 6:38; 8:27; Jn 11:34; etc.]. This was entirely in keeping with the reality of his voluntary humiliation in the “form of a servant” (Phil 2:7)». This choice inaugurated, as the Catechism recalls, «his work of restoring what Adam's disobedience had destroyed» (CCC 532).

Mary and Joseph's daily action was part of this, with the respective peculiarities of the maternal and paternal task. Clearly, the educational work of the Blessed Virgin must have been «very incisive and profound and found in the human psychology of Jesus a very fertile soil», as St John Paul II explained in the General Audience of 4 December 1996. But «just as much, and perhaps even more», wrote Father Tarcisio Stramare, «must be said of the educational role of Saint Joseph, since he was a male child, a circumstance that entailed greater contact and confrontation with the father figure, bearing in mind that in the Jewish tradition among the father’s duties towards his son there is expressly that of "instructing him in the Torah and in a trade"» [San Giuseppe. Fatto religioso e teologia (Saint Joseph. Religious Fact and Theology), Shalom, 2018, pg. 435].

St Thomas had already expressed himself in the same sense, emphasising the importance of the father: «It is clear that man's education requires not only the care of the mother, by whom he is nourished, but much more the care of the father, who must instruct him, defend him, and perfect him in both interior and exterior goods...».

The educational action of Joseph, alongside Mary, was therefore of absolute significance in the growth of Jesus, who had in his parents two teachers of humanity. Joseph exercised his rights and duties towards his divine Son with the authority that came from his role as head of the Holy Family. An authority that Joseph (as well as his spouse in relation to her Son) lived not as an arbitrary power but in the only way capable of serving a plan of love, that is, in humble obedience to the will of the heavenly Father. This truth evidently clashes with the ideas of education, fatherhood and motherhood that are spread today by the dominant culture.

Ultimately, as Pope Wojtyla concluded at the General Audience mentioned above: «Mary and Joseph therefore emerge as models for all educators. They support them in the great difficulties encountered by the family today and show them the way to achieve an incisive and effective education of their children. Their experience as educators constitutes a sure point of reference for Christian parents, who are called, in ever more complex and difficult conditions, to place themselves at the service of the integral development of the person of their children, so that they may live a life worthy of mankind and in line with God’s plan».