St Joseph, the father to imitate

St Joseph's greatest glory lies in having served “directly the person and mission of Jesus through the exercise of his paternity”, as Redemptoris Custos teaches. Mary's spouse carried out his paternal role with a single purpose: to do the will of the heavenly Father. That is why fathers of all times have in him, the master of the interior life, their greatest model. 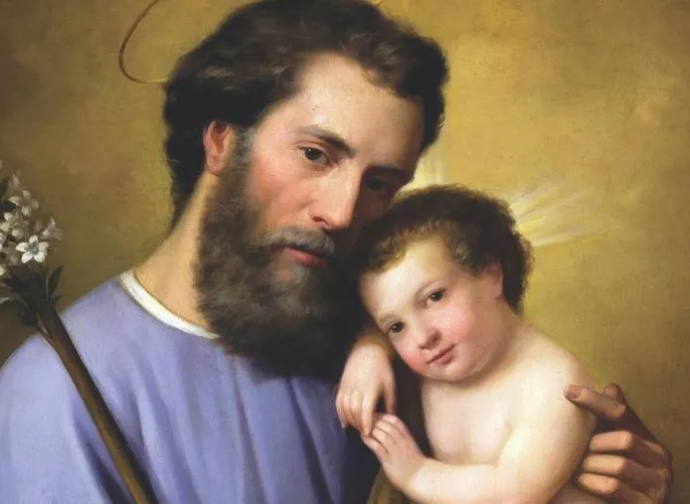 The Church and the world need fathers, recalled Francis in his apostolic letter Patris Corde. This need is all the more urgent in today's society. And one day, perhaps, even historians will recognise that today's evils are linked in large part to the weakening and disavowal of the father figure, caused by the culture of individualism, the 1968 protest movements and related “conquests” (divorce, abortion, artificial insemination, sexual fluidity, etc.).

But there is an antidote to these evils: the name of St Joseph, who is the best father of all time because in his every earthly day at Jesus’ side he followed a single purpose: to do the will of his heavenly Father. As St Paul VI explains, St Joseph’s fatherhood was manifested “in having made his life a service, a sacrifice, to the mystery of the Incarnation and to the redemptive mission that is linked to it; in having used the legal authority that belonged to him over the Holy Family to make a total gift of himself, of his life, of his work...”.

In the same perspective, St John Paul II wanted Redemptoris Custos - the apostolic exhortation dedicated to the father of Jesus and which, more than any other pontifical document, dwells organically on the importance of his fatherhood - to highlight in its title [1] his quality of “guardian”. The idea was to point out that the true father is a true custodian, that is, a man who exercises his fatherhood as a service to someone - the child - who is not his property but God's. And it is therefore to God that children must be led, following the plans that the eternal Father has for them.

St Joseph's paternity does not derive from generation, yet “he possesses in full the authenticity of human paternity, of the paternal mission in the family” (RC, 21). It should be remembered that his paternal rights-duties towards Jesus derive from his marriage to Mary, with whom Joseph had shared (by making it himself) the absolute vow of virginity. “The Holy Spirit, resting on the righteousness of both, gave the son to both of them; he worked through the gender that was able to give birth, but in such a way that He would also be born to her husband”.

Mary and Joseph were in fact conceived together, from eternity, in view of the Incarnation of the Son of God. Their marriage had not only what St Thomas calls the “first perfection” (the indivisible union of souls) but also the “second perfection”, with regard to the custody and education of the offspring. For these tasks, along with the maternal care of Mary, the presence of Joseph was therefore necessary:  as a father he had to provide for the orderly introduction of Jesus into the world. Joseph did this by fulfilling all the duties deriving from human and divine laws (the imposition of a name, registration at the Bethlehem registry office during the Augustan census, circumcision, presentation in the temple, etc.), protecting the Child from danger, providing nourishment, teaching Him a trade, educating Him during the long years of His hidden life.

The aspect of education is obviously central and gives an idea of the greatness of Joseph’s role (a greatness second only to that of Mary among creatures) in the plan of Redemption. John Paul II affirms: “One might think that Jesus, possessing in himself the fullness of divinity, had no need of educators. But the mystery of the Incarnation reveals to us that the Son of God came into the world in a human condition entirely similar to our own, except for sin (cf. Heb 4:15). As with every human being, Jesus’ growth, from infancy to adulthood (cf. Lk 2:40), needed the educational action of his parents. Alongside the maternal presence of Mary, Jesus could count on the paternal figure of Joseph, a just man (cf. Mt 1:19), who ensured the necessary balance of the educational action. Exercising the function of father, Joseph cooperated with his wife in making the house of Nazareth a favourable environment for the growth and personal maturation of the Saviour of humanity [...]” (General Audience of 4 December 1996).

For his part, the Saviour honoured the fourth commandment to the highest degree. It was through his submission to Mary and Joseph, “models of all educators” (Wojtyla), that Jesus grew in wisdom, age and grace (Lk 2:52), sanctifying family relationships and preparing himself for the hardest and greatest fiat voluntas tua, which took place in the Garden of Olives. Here too, as in a circle, the splendour of obedience is evident: it characterises all the relationships within the Holy Family (where the head is Joseph), has the Heavenly Father as its ultimate reference and, therefore, charity as its end, which consists above all in the salvation of souls.

While it is true that charity informed all of Joseph's paternal actions, it is equally true that at its basis - before and during his marriage to Mary - was a profound life of prayer. It is not by chance that the saints, Teresa of Avila above all, indicated and endorsed Jesus’ father as a teacher of the interior life. It is from his personal and daily relationship with God that Joseph was given the gift of humility and all the graces necessary to carry out the high ministry of caring for the eternal Son and His Mother. The paternal love that the Almighty bestowed on Joseph through this relationship could not but influence the very perfect human growth of Jesus. As Wojtyla wrote in his book “Rise, Let Us Be on Our Way!” (Mondadori, 2004), as a true God, He had experience of divine paternity and sonship in the bosom of the Most Holy Trinity”; and, as a true man, “experienced God's paternity through his relationship of sonship with St Joseph”.

Despite the uniqueness of the entire Holy Family, one fact remains: Joseph reminds today’s fathers of their duty to educate their children in the faith, to guide them day by day by their own example to keep Jesus and Mary as their greatest treasures. And to pray to the Father of Mercies, asking Him to know and do His will in every action. This is the only guarantee for those who want the eternal good of their children.

[1]  The title Redemptoris Custos was personally chosen by John Paul II, as Father Tarcisio Stramare (a Josephologist who collaborated on the theological structure of that apostolic exhortation and who initially would have preferred to include the term 'pater' in the title, but was later convinced of the appropriateness of the Holy Father's choice) explained several times in his books and also in an interview he gave to the Timone (No. 193, March 2020) a few weeks before his death.