Semeraro & Co. The gay lobby in pursuit of power at St. Peter's

As a slap in the face for those who still want to believe that the pope is not actually in favour of civil unions, Francis shows his indifference by his choice of new cardinals, three are well known for their positions openly in favour not just of same-sex civil unions but the legitimisation of homosexuality.
- "HOW BERGOGLIO FOUGHT FOR GAY UNIONS, BUT LOST", by Andrea Zambrano 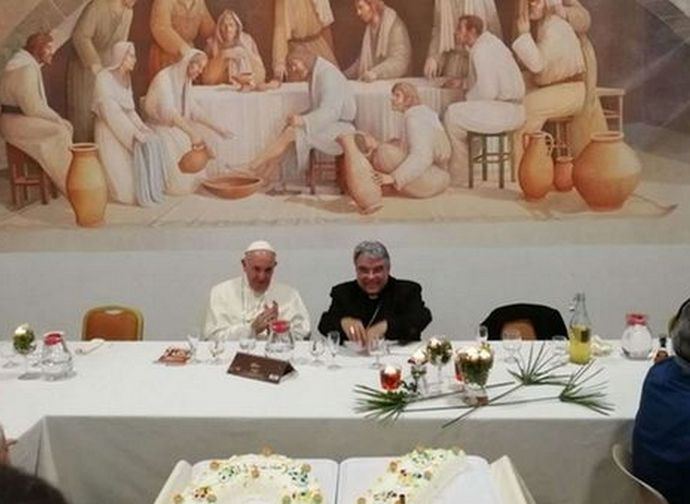 It’s a little moving to see Italian newspapers, social media, Church prelates, and other major lay leaders in the Church try so hard to explain - against all evidence - that the Pope did not really mean what he said in support of homosexual civil unions recorded in the now famous docufilm Francesco screened last week in Rome at a film festival. The Vatican media’s sacred silence was not enough to quell confusion. Their silence was complicit with that of the pope's own spokesman, who said nothing to deny the civil-union interpretation, which hit international headlines minutes after the film’s screening. Reconstructing the pope’s prior position on this issue was of no help either (which today the Argentinean Bishop Aguer confirmed to the Daily Compass, having witnessed it directly). Auger’s account demonstrates that Pope Francis position had actually coincided with certain bishops in Italy who stood in favour of legalising same-sex civil unions.

For those who refuse to see or hear, not even the plainest of hard evidence is enough to convince them otherwise. Hence, Pope Francis, while utterly disregarding the huge fuss this has made, has decided to go right ahead by promoting, as new cardinals, major Church figures who support the gay agenda. At least three of the thirteen new cardinals in the upcoming consistory are clearly not only in favour of legally recognising homosexual civil unions, but the normalisation of homosexuality altogether; and above all, are extremely committed to promoting the LGBT cause inside the Catholic Church.

The most prominent among them is, no doubt, the bishop of Albano, Marcello Semeraro, who turned his diocese into the Italian capital of the Catholic-gay movement. Every year Albano hosts the Forum of Italian LGBT Christians. The forum’s aim is precisely to make homosexuality - and not just persons with homosexual tendencies - fully accepted inside the Church. It aspires to change the Catholic Catechism and argues for a rereading of Sacred Scripture according to a rainbow ideology. It is not surprising, therefore, that as soon as he received news of his appointment to the cardinalate, Semeraro said he supported reasons for civil unions while referencing the pope’s interview. Meanwhile, Fr. Aristide Fumagalli, the Italian version of Fr. James Martin, has just released his new book L'amore possibile - Persone homosessuali e morale cristiana (“Possible love. Homosexual persons and Christian morality”). The preface author was none other than Semeraro himself. What’s more, during the January 2016 Italian edition of Family Day, Semeraro openly supported the legal recognition of homosexual civil unions, while excluding children’s adoption by gay couples.

Therefore, Semeraro's position is not surprising at all. It is consistent with his personal history and rapid rise within Church leadership. Appointed Bishop of Oria in 1998 by John Paul II and promoted to the Diocese of Albano in 2004, despite insidious rumours about a relationship with a priest. However, it wasn’t until Pope Francis’s election that his power inside the Vatican would grow enormously. Francis knew Semeraro well because he had worked closely with him during the 2001 Synod. So in April 2013, Francis immediately called him to serve as Secretary to his Council of Cardinals, which Francis had formed to advise him on reforming Vatican Curia. And now, just within the last ten days, Semeraro was appointed Prefect of the Congregation for the Causes of Saints, replacing Cardinal Angelo Becciu who had fallen into disgrace, and then made a cardinal.

In an extended interview published on 2 January 2018 in Nuovo Quotidiano (a media outlet based in Apulia), Bishop Semeraro recounted his close friendship with Pope Francis, who a few days earlier surprised him by showing up at his 70th birthday party. During the interview, Semeraro also discusses remarried divorced couples, essentially agreeing with an address Pope Francis had delivered on the same subject. Semeraro said, "If divorcees want to remarry, this is even a good thing. It means that they have not lost faith in marriage. Anyway, today the Church is very attentive to the individual aspects of marriage. It is necessary to evaluate them case by case. Times have changed." Indeed, the times are changing and, thus, the "New Church" is now more than willing then ever to deny St. Paul and all the Scriptures that are crystal clear on the subject of homosexuality.

Cut from the same cloth is the Archbishop of Washington, Wilton Gregory, who is the first African-American bishop in the United States. Just a year ago, it was Gregory who stated during an interview that transgender Catholics “belong to the heart of this Church." Previously as Archbishop of Atlanta, Gregory had opened up his cathedral for family meetings with LGBT members and had expressed his full support of Fr. James Martin Msgr. Henry Gracz, both of whom are hugely active in promoting the LGBT agenda inside the Catholic Church. In 2014, Gregory also appointed a deacon as spiritual advisor to the LGBT community in his archdiocese and harshly criticised the Church’s attitudes toward LGBT people.

The third openly gay-friendly new cardinal is the Maltese bishop Mario Grech, whose pro-gay activism became clear during the first Synod on the Family back in 2014. It was then that Grech invited his fellow synod fathers to use more sensitive language toward gays and lesbians. He also spoke publicly in favour of homosexual civil unions and same-sex couples. In a 2015 interview, Grech said that "in addition to marriage" there are "different forms of relationships."

Perhaps these men were not chosen as cardinals exclusively for their pro-gay activism, but it is certain that such a cumbersome presence in matters of homosexuality could not go unnoticed. It is also certain the Catholic-gay presence has noticeably increased in the College of Cardinals.

The U.S. website New Ways Ministry, a reference point for the Catholic-gay battle, while applauding the pope for his choice of these three men, lists the names of ten other members of the College of Cardinals who tend to be pro-LGBT. All were appointed by Pope Francis:  Blase Cupich, Joseph Tobin, Kevin Farrell, Jozef de Kesel, Vincent Nichols, Matteo Zuppi, Jean-Claude Hollerich, José Tolentino Medonca, John Atcherly Dew, and Father Michael Czerny, SJ.

It goes without saying that if these men have long held public positions in support of homosexuality and same-sex civil unions, then it is likely that within the College of Cardinals there are other "sympathisers" who have remained in the shadows until now. It means that the weight of the gay lobby in the next conclave will be very influential indeed.

All we can do now is pray that Christ will quickly regain control of His barque.