“How Bergoglio fought for gay unions, but lost”

Bishop Aguer shares an anecdote with the Daily Compass that explains the phrase of Pope Francis, “I fought for that” , during an interview about civil unions for homosexuals: “In 2010 we Argentinean bishops took a position on egalitarian marriage proposed by the Kirchner administration. Bergoglio proposed the civil union regulatory solution, but we opposed it and voted against his proposal. According to the bishop emeritus of La Plata, this is an opinion embedded in Bergoglio’s mind, but it cannot become Magisterium, and accepting it out of papolatry is neither sound nor right  for Catholics”. 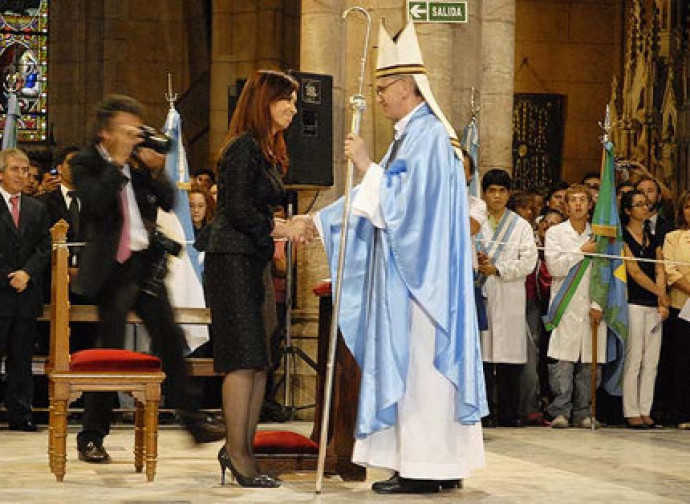 When the Argentinean bishops put the future pontiff in a minority position on civil unions. The debated interview Pope Francis granted to the TV channel Televisa  was skilfully ‘cut and pasted’ by the  director Evgeny Affievsky , sewing together the pope’s vulgate in favour of civil unions. Nonetheless, there was a last excerpt that had yet to be explained.

That’s where, immediately after having spoken about the law on “civil unions” (“What we have to create is a law on civil unions. In this way they are legally protected”), Pope Francis added these words, “that’s what I fought for”.

Many were those who wondered and thought that those words could be dated back to when he was Archbishop of Buenos Aires and was faced with the efforts of the president Mme. Cristina Kirchner and her Peronist party for the approval of ‘egalitarian marriage’.

Others reported their search among sources in Argentina, prepared to argue this to be a “lesser evil” solution during the discussion between 2009 and 2010 for the approval of the national law recognising the so-called wedding between homosexual persons. Therefore, a law on civil unions as opposed to matrimony as such. In any case, however, such a solution was unacceptable for the Magisterium. Confirming this outlook depicting a precise opinion held by the pontiff and  not just one of those things that happens, we now have the words of the bishop emeritus of La Plata, Most Rev. Héctor Aguer (see photo), who sent an article to several papers, including the Daily Compass, revealing and confirming what had yet to be known in full. “In fact”, writes Bishop Aguer, “during a plenary assembly of the Argentinean Episcopal Conference, the then Cardinal Archbishop Bergoglio proposed the approval of the lawful status of civil unions granted by the state as a possible alternative to what was called – and is still called – ‘egalitarian marriage”’..

Therefore, according to this Argentinean prelate,  this would confirm hearsay that Bergoglio has always been in favour of civil unions, and hence his position voiced in the documentary film wouldn’t be strange at all. Quite on the contrary.

It’s now understandable, however, why he fought for this. Because his was a minority position in the Argentinean Episcopal Conference.

When contacted later by the Daily Compass,  Bishop Aguer explained: “On that occasion we bishops, contrary to what Bergoglio was proposing, argued that it wasn’t just a political or sociological issue, but entailed a moral judgment”.

And therefore, that proposal couldn’t be accepted?
Exactly, it wasn’t possible to promote civil laws contrary to the natural order. In fact, we recalled that this doctrine is enunciated and reiterated many times in the documents of Vatican Council II.

How did it end up?
We took a vote and the Argentinean bishops rejected that proposal with a nay vote.

Were there other bishops on Bergoglio’s side?
Few, very few if I remember correctly. .

The future pontiff ended up in the minority?

Therefore, it isn’t Magisterium?
No, it is a personal opinion, just like the things that come to the surface when speaking with journalists on an airplane.

Do you recall when it happened?
Wait, let me think. I don’t remember the exact date, but it must have been some 10 years ago.

Could it have been in 2010? That year there was that clash between you bishops and Mme. President Kirchner.
Yes, that’s exactly when it was. .

And yet in 2009 Bergoglio had locked horns with the then mayor Macri (a future president of Argentina) over the very same matter.
He remained contrary to matrimony, but in favour of a civil regulation solution. This is an opinion embedded in Bergoglio’s mind.

What would you say?

It’s one thing to say this as an archbishop, even if it is grave, but he can’t say it as the pontiff. As the Congregation for the Doctrine of the Faith says, “In no way is it possible to approve this conduct or the legal recognition of these unions”. It’s taken for granted to think that these unions, for which it is proposed to grant legal recognition, are  not ‘platonic’. Therefore, implicitly being approved would be camouflage for legal sodomy.

The so-called LGBT community, however, is now taking advantage of these words. . .

It is ominous that there are groups in the Church causing so much damage, the pope cannot support them. This is indeed serious..

And yet many are those who today make believe that the pope was misunderstood…
What could be called papolatry (idolatry of the pope) is not sound or correct behaviour for Catholics. I’ve read that some of the victims of sexual abuse by priests have applauded the pope’s words as a hoped-for change in the teaching of the Church. I trust and hope that theologians, cardinals and bishops wiser than I am may shed light on one and all at this tenebrous moment in time.

What impact could this position have on persons with homosexual inclinations?
It would be very painful and sorrowful because it would also hamper the process of salvation described in the Catechism which above all envisages the truth for these persons. It would be a scandal added on to the promotion of clergymen with very bad reputations (you know what I mean) whom many people know very well.