Sarah and Benedict XVI, the book is released, text and authors confirmed

A press release announcing the release of the Italian edition of "From the Depths of Our Hearts" for January 30th puts an end (or almost) to days and days of fierce controversy. The signatures will be "Robert Sarah with Joseph Ratzinger / Benedict XVI" to avoid further speculation. So the truth has been restored, but the wound of a media lynching against Cardinal Sarah and the pope emeritus remains, to which no one - for sure - will apologise. And there is also the "unsolved mystery" of a statement signed by Benedict XVI and Sarah last Friday: it should have been published by the Secretariat of State but all trace has been lost. 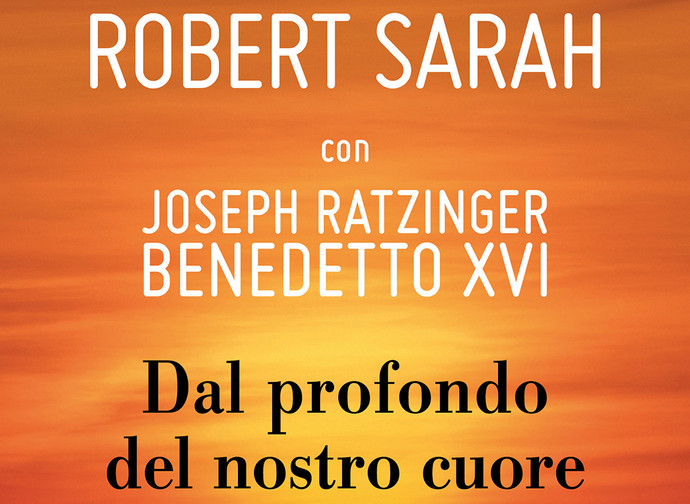 “Today and only today, when the clouds seem to clear (...) we announce the release of the book From the Depths of Our Hearts by Robert Sarah with Joseph Ratzinger / Benedict XVI for Thursday 30 January 2020, thanking the authors and all the friends who have been close to us during this delicate enterprise.” With these words David Cantagalli, the Italian publisher for Benedict XVI and Cardinal Robert Sarah, in an official press release puts an end (or almost) to the squalid story that enveloped the announcement of the publication of the book in defence of celibacy, co-authored by Cardinal Sarah and the Pope emeritus. So, no signature will be withdrawn after all, as Benedict's secretary, Monsignor Georg Ganswein, had informed news agencies after rumours revealed that Benedict XVI was unaware of the book's design. This led to the start of a real media lynching of Cardinal Sarah, but also the same old campaign against the Pope emeritus.

The book will be released in Italian as scheduled on January 30, with a minor formal change to the cover, as agreed with the French publisher Fayard, who manages all the contracts for translation: the signature of the authors will no longer be Robert Sarah-Benedict XVI, but "Robert Sarah with Joseph Ratzinger / Benedict XVI". The inclusion of his own name - Joseph Ratzinger - somehow intends to avoid the declared enemies of Benedict XVI using the pretentious topic of a text written by an "anti-pope"; but whoever reads this book must honestly admit that the spirit with which it is written is one of a contribution to the Truth, not of an ideological or power skirmish. And the addition of the preposition "with" in the signature clarifies what is explained in the publisher's note accompanying the edition. That is, the book is composed of an essay by Benedict XVI, another by Cardinal Sarah (both have already been explained by the Daily Compass, here and here), then an introduction and a conclusion physically written by Sarah but "read and shared" by Benedict XVI. Exactly what had already been explained from the start, but which was ignored to give rise to "incessant, nauseating and lying controversy", as Cardinal Sarah defined it a few days ago.

The controversies were particularly virulent by the usual sectors of the Catholic world, by “the revolutionary guardians" and by the Catto-progressive "intellectuals", who certainly did not spare Cardinal Sarah from their harsh insults including a request to muzzle the Pope emeritus. We have reached a level of lies perhaps never reached before, particularly serious when we consider that even the Italian bishops’s newspaper, Avvenire, put words in Benedict XVI mouth (January 15) that he never said and that could not be deduced even from the however unfortunate statements made by Ganswein: "Benedict: I do not sign Sarah's book on celibacy -" Never authorised the apposition, nor shared the premise and the conclusion”.

As evidence of the shared feeling between Cardinal Sarah and the pope emeritus, in the communiqué Cantagalli stresses that: «It is a book with a high theological, biblical, spiritual and human value, guaranteed by the expertise of the authors and by their willingness to make available the outcomes of their respective reflections, manifesting their love for the Church, for His Holiness Pope Francis and for all humanity.”

So: the book comes out, the truth is restored. One could say that everything ends well. But it is not quite like that. First of all because these weeks of poison, have not been canceled and the slime thrown above all on Cardinal Sarah will leave a stain. And you can be sure, no one will apologise - indeed, they will also avoid giving any importance to the news - on what has happened.
Secondly, events - as we have already said - that seemed to be controlled by a director who had every interest in creating a fuss over nothing in order to obscure the content of the book, certainly unwelcome to those trying to overturn the doctrine of the Church by attacking priestly celibacy. A goal, unfortunately, that has partially succeeded.

The third part, remains a mystery. After days of fierce controversy, Cardinal Sarah went to Mater Ecclesiae, the residence of Pope Benedict XVI, at 6 pm on Friday 17. It was a clarifying meeting that Sarah himself reported with some tweets: «Due to the incessant, nauseating and false controversies that have never stopped since the beginning of the week, concerning the book From the Depths of Our Hearts, I met Pope Emeritus Benedict XVI tonight ", wrote the Guinean cardinal, who then continues:" With Pope Emeritus Benedict XVI we have been able to ascertain that there are no misunderstandings between us. I came out of this lovely meeting very happy, full of peace and courage.” This is followed by recognition for the work done by the French publisher.

The meeting and the concordant atmosphere that characterised it was not denied by anyone, but the announcement via tweet by Cardinal Sarah seemed to herald something that would attest once and for all to this unity of purpose. In fact, we know that a joint communiqué, signed by Benedict XVI and Cardinal Sarah, was written at that meeting, aimed at confirming the double authorship of the book and putting an end to the media lynching of the two. In order to avoid further friction, it had been decided to deliver this press release to the Secretariat of State for publication, which should have happened no later than Monday 20. However, its traces have been lost: censored by the Secretariat of State? Left in Msgr. Ganswein’s bag or some other official’s? It is not known.
However, the unpleasant impression remains that everything is being done to prevent the total harmony between Benedict XVI and Cardinal Sarah in matters of priesthood, celibacy and not only, from emerging clearly.