Benedict XVI: celibacy is in the nature of priesthood

We read Benedict XVI’s part of the book From the Depths of Our Hearts, co-authored with Cardinal Sarah. It starts from the scriptures to demonstrate the need for priestly celibacy and ends with the New Covenant. Celibacy is concerned with dogma, because it is placed at the heart of the interpretation of the Scriptures. "We can say that the sexual abstinence that was functional was transformed automatically into an ontological abstinence." 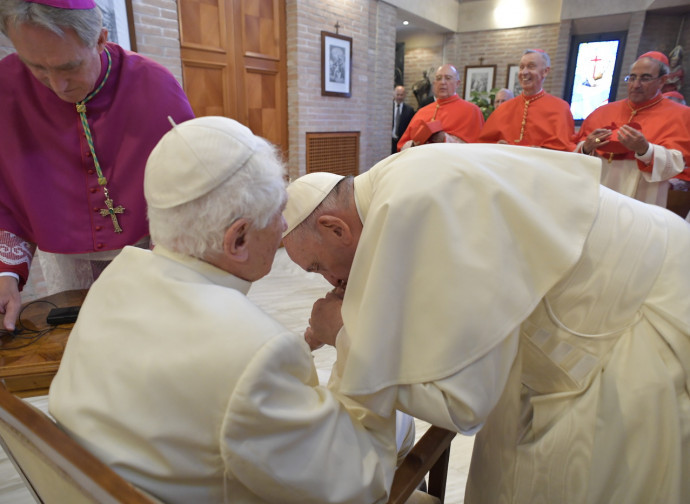 After reading the contribution offered by Benedict XVI in the book From the Depths of Our Hearts, one can understand why the Vatican Press Office has done everything to minimise its content and above all to shift attention to the ridiculous question of whether the Pope emeritus is or is not the coauthor; that an author who writes half of a book, who shares and signs the introduction and the conclusion should not be considered the co-author is one of the latest follies of those who have long lost any sense of reality. Let’s leave the problem of addressing these questions of no importance to others, artfully assembled to avoid talking about the content, which is instead a luminous reference point in this long night the Church is going through.

It requires some patience to follow Ratzinger’s argument which may seem, initially, to skirt the problem, but which instead identifies its root. That poisoned root he identifies is at the origin of the crisis of the liturgy, of the priesthood and of celibacy. Three in one. And Ratzinger's denunciation shakes the columns on which the false church is built, returning to what he had already said in the premise of the first volume of his trilogy on Jesus of Nazareth and that is that true interpretation requires not only a historical-critical approach, but also and essentially a theological approach, thus recovering the four senses of Scripture which were the heart of the interpretation of the Fathers and of the whole Church. At least until it was decided to believe that the theological approach was in contrast with the scientific one, the only one capable of restoring the true meaning of the text.

Let’s look at what Pope Benedict XVI has to say: «At the foundation of the serious situation in which the priesthood finds itself today, we find a methodological flaw in the reception of Sacred Scripture as the Word of God. The abandonment of a Christological interpretation of the Old Testament led many contemporary exegetes to a deficient theology of worship. They did not understand that Jesus, far from abolishing the worship and adoration owed to God, took them upon himself and accomplished them in the loving act of his sacrifice ". Jesus did not come to abolish, but to bring to fulfilment (cf. Mt. 5, 17): the new worship in spirit and truth (cf. Jn. 4, 23) does not therefore entail the abolition of sacrifice and rite, nor of the Temple, but their full realisation in the person of Jesus Christ, in his prayer, in his offering.

The priesthood, the sacraments, the celebration of the Eucharist are not an undue return to an Old Testament mentality, but only the new form that perpetuates the one priesthood and the only sacrifice, of the Lord. The sense of celibacy lies in the union with this sacrifice of the Lord Jesus, of his whole Person, who goes beyond the Sinai covenant, "at the center of which he himself stands as both the one sacrificing and as the victim." At the Last Supper, the Lord transforms the cruel act of his death sentence into a voluntary sacrifice pleasing to God: "it is in this way that Jesus accomplishes the fundamental renewal of the cult that will remain forever valid and binding." The Levitical priesthood ceases and Jesus becomes the high and eternal priest and the new temple in which "a new space of adoration of God" is given. Recalling the letter to the Corinthians of Saint Clement Romano, Benedict XVI points out that a parallel is thus established between the priesthood of Sinai and that of the Church: "episkopos designates the High Priest, presbyteros the priest, diakonos the Levite." From the beginning of the Church, we therefore have a Christological reading of the Old Testament, which should not be understood as a literary device, but as the expression "of an internal logic of the text"; a reading that has in people materialised in flesh and blood.

Now, this flawed interpretation has reinvaded our times. This shot that the Pope emeritus offers us constitutes the essential background to be able to understand the great crisis of the liturgy and the priesthood that has been overwhelming us since the times of Vatican II, a crisis that was born and spread due to the fact that a Christological and pneumatological approach to the Old and New Testaments "had become incomprehensible". As for Luther. “The Decree of the Council on the ministry and life of priests practically does not deal with this question. Nevertheless, in the period that followed, it monopolised our attention with an unprecedented urgency, and turned into a crisis of the priesthood that has lasted to this day in the Church. "

Celibacy is about to be sucked into this crisis. For this reason, Benedict XVI wants to show that celibacy constitutes that internal transformation that completes the prescriptions of the Sinai Covenant regarding the priesthood. The Pope Emeritus points out that the priests of the Old Covenant were held to sexual abstinence when they  "led worship and were therefore in contact with the divine mystery. The relation between sexual abstinence and divine worship was absolutely clear in common awareness of Israel." Now, the compatibility between priesthood and marriage was possible because the priesthood was exercised only in certain specified periods. But the priests of the New Covenant are continually in contact with the divine mystery; "This requires exclusivity on their part from God. It consequently excludes other bonds which, like marriage, embrace all life."

This is not an arbitrary interpretation: Saint Ambrose has already, in the De Officiis ministrorum, resumed the abstinence required in the Ancient Alliance, "time of prefiguration", to indicate that much more is required by the ministers of the New. Pope Siricius, in turn, in the fundamental Decretale Directa, in which the continence of the clergy is declared "indissoluble law", explained that the priests of the Old Testament were required to maintain continence only temporarily, because their service was temporary and to ensure a offspring, since the priesthood was hereditary; and adds: "the Lord Jesus formally testified in the Gospel that he had not come to abolish the Law, but to fulfil it." For this reason "all of us, priests and deacons, are bound by the day of our ordination, to put our hearts and bodies at the service of sobriety and purity."

Therefore, also as regards sexual abstinence, in the transition from the Old to the New Covenant the transformation that we have seen previously took place: "We can say that the sexual abstinence that was functional was transformed automatically into an ontological abstinence. And so, its motivation and its meaning have been changed from the inside and in depth.” It is here that the affirmation of the estrangement of celibacy at every contempt for corporeality and marriage is rooted, as already appeared in the previews. The sense of the priesthood of the New Covenant rests on this transformation from within what had been instituted in the Ancient; and so also the continence required of the priests of the Church is a change that does not abolish but completes, brings to fullness what was lived in the Old Covenant.

This had been clearly understood already in the early centuries of the Church, when it was established that "married men could not receive the sacrament of Orders if they had not committed themselves to observing sexual abstinence". It is interesting that the Pope emeritus here refers, in note 7, to Stefan Heid's book on celibacy, which shows with abundant references that the acceptance of perpetual continence was an indispensable condition for the ordination of deacons, priests and bishops, both in East than in the West.

Benedict XVI, in his own style, hangs on to the great tradition of the early centuries of the Church. The parallel between his position and that of Pope Siricius must not be overlooked: for both the full continence of the priest is a natural internal transformation of the Old Testament; and for this scriptural reason, it cannot be derogated. Siricius unequivocally defined it "indissoluble law", while Benedict XVI recognises it as "ontological abstinence."

Recognising this truth requires willingness to approach Revelation in the light of the faith, within the great tradition of the Church, which allows us to penetrate the Scriptures in their deepest, truest sense, as the Word of God and not as the mere word of men. Ratzinger once again manages to turn the prospect round. Now the ball is in Francesco's court, but with the stakes increased: celibacy has to do - and indeed - with dogma, because it is at the heart of the interpretation of the Scriptures. It is important to remember this.