In the book From the Depths of Our Hearts, Cardinal Sarah deduces the consequences of the teachings of Benedict XVI, especially in the light of the Amazonian Synod which he was present at. By "weakening" priestly celibacy, Sarah says, it is primarily the faithful who would suffer the devastation, because they would be deprived of the visible sign that the priest belongs totally to God. The problem lies with some Western and South American bishops who live celibacy as a burden. And he condemns an alleged "right to the Eucharist": "A community that is formed with the idea of a" right to the Eucharist "will no longer be a disciple of Christ." 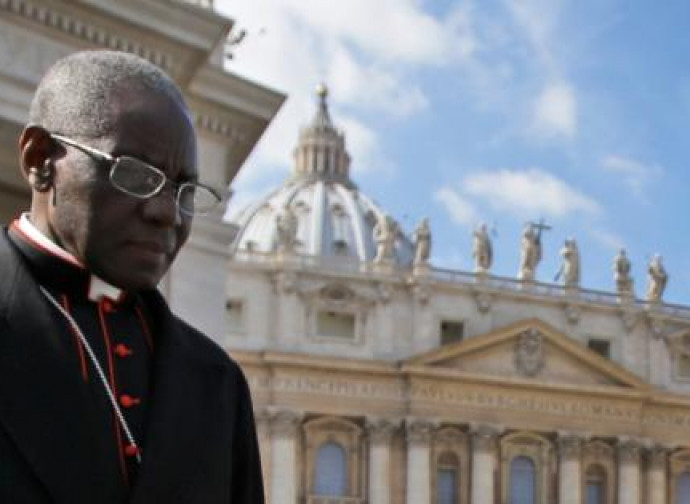 Cardinal Robert Sarah places himself in the wake of the teachings that the pope emeritus has offered in the book at the center of the controversy (From the Depths of Our Hearts ) and throughout his pontificate. This is not an orchestrated use of those reflections, but an integration in light of what the Cardinal experienced during the recent Synod: «During the Synod on Amazonia, I took the time to listen to people on the ground and to talk with experienced missionaries. These exchanges reassured me in the thought that the possibility of ordaining married men would be a pastoral catastrophe, lead to ecclesiological confusion and obscure our understanding of the priesthood." In his speech, Sarah shows great foresight about the effects that the weakening of celibacy will cause in the Church, due to that ontological belonging of celibacy to the priesthood, highlighted by the bright and decisive expression of Benedict XVI: «Never a Pope - the cardinal observes - expressed so forcefully the necessity of priestly celibacy».

The consequences will be devastating first of all for the faithful, because they would be deprived of the visible sign that the priest belongs totally to God, belonging that is the foundation and supports the gift of self to the flock. Sarah speaks from experience and recounts when, as a young priest, he visited the remote villages of Guinea, noting the faithfulness of those Christian communities who for years had not had a priest visit them. That long sacramental abstinence had the effect of arousing a hunger and thirst for the sacraments in them. Sarah remembers how "while travelling through swamps on a makeshift canoe [...], or crossing dangerous torrents, where we were afraid of being engulfed, I felt quite palpably the joy of being entirely dedicated to God and available, given over to his people.”

These concrete experiences enabled him to witness the joy "of the welcome of a priest in an African village that recognises Christ-Bridegroom in him: what an explosion of joy! What festivity!". These poor populations had no historical or theological studies behind them; yet they, the poor and the simple "know how to discern with the eyes of faith the presence of Christ the Bridegroom of the Church in the celibate priest." Touching this infallible sensus fidei with one's own hand "it cures him forever of all forms of clericalism" and from any idea that celibacy is "too heavy a burden to carry."

According to the Cardinal, this is the reason behind the "renunciation" of defending compulsory celibacy: "I get the impression that for some bishops from the West or even South America, celibacy has become a load. They remain faithful to it, but no longer feel that they have the  courage to impose it on future priests and on Christian communities, because they themselves suffer from it.” But this is a terrible error of perspective, because "although it is sometimes a trial, priestly celibacy correctly understood, is liberating."

Cardinal Sarah also responds to those who have championed the right to the Eucharist, which every Christian community should have: "The priesthood is a gift that is received, as the Incarnation of the Word is received. It is neither a right nor an obligation. A community that was formed according to the idea of a "right to the Eucharist" would no longer be a disciple of Christ ", because any believer that does not recognise the Eucharist is a gift but as a due,"shows that he is incapable of understanding it." This "logic of claiming the Eucharistic", rather than an expression of the thinking of the Christian communities of the Amazon, is the result of "obsessions that crop up in theological milieus at universities", in those "ideologies developed by a few theologians, or rather sorcerer’s apprentices, who wish to utilise the distress of poor peoples as an experimental laboratory for their clever plans", such as celibacy.

For this reason the Church, from its origins, has not feared demanding continence from candidates for sacred orders. The Cardinal denounces the "intellectual dishonesty" of those who continue to repeat that there have always been married priests in the Church: "That is true. But they were obliged to practice complete continence." And likewise, the excuse that the Christian East has always had  married clergy, clashes with historical reality, as it "only permitted belatedly that married men who became priests could have sexual relations with their spouses", that is in the council in Trullo of 691, due to an "error in the transcribing the canons of the council that had been held in 390 in Carthage." As for the fact that the Eastern Churches continue to allow married men, the cardinal proposes a reflection that harmonises the historical-theological truth with the prudence that comes from charity and knowledge of human nature: “I think that the purpose of this acceptance [of married priests] is to foster a gradual development toward the practice of celibacy, which would take place not by a disciplinarian path but rather for properly spiritual and pastoral reasons."

The whole Church needs celibate priests, because, without this presence, "the Church can no longer become aware that she is the Bride of Christ.". Celibacy can be authentically understood and lived only within the logic of spousal donation; for this reason marriage and celibacy are intimately united: "If the one is called into question, the other fails", as Benedict XVI previously pointed out, in the vigil with priests in St. Peter's Square, during the year dedicated to them. The risk then is that precisely where marriage is in crisis or is deformed, the weakening of celibacy ends up weakening even more the testimony of "an absolute gift of self."

Sarah also takes a stand on the proposal for female deaconesses, clarifying that the deaconesses of the first centuries "were not recipients of the Sacrament of Holy Orders" and were forbidden "to have any ministry at the altar during the liturgy." What is going on today is the product of "a false feminism", which yields to "temptation that aims to clericalize women." The result of clericalism is also to think of founding communities exclusively on the presence of people ordained at all costs, rather than focusing on a true formation of catechists; an obsession that basically clashes with the appeal of Vatican II to the vocation of the laity and risks undermining the authentic "dynamism from baptism."

Sarah also responds with great common sense to those who cling to the fact that exceptions already exist in the Church regarding compulsory celibacy: "An exception is by definition transitory and an incidental occurrence in the normal and natural state of affairs. That is not the case with a remote region that lacks priests", because it is a condition that has always characterised mission countries and today also the West. Then, it is clear that "the ordination of married men, even if they were permanent deacons before, is not an exception, but a rupture, a wound in the consistency of the priesthood." Nor does it hold up the argument of those who believe that celibacy is foreign to certain cultures, because "there is no culture that the grace of God cannot reach and transform".

The  cure for this deadly disease that is affecting the priesthood, its identity, its integrity and vocational fruitfulness is that which the Church has always been used to resolving the crises it has encountered in its history: "We will not solve the crisis of the priesthood by weakening celibacy. On the contrary, I am convinced that the future of the priesthood lies in Gospel radicalism", which has its soul in a renewed and profound life of prayer "assiduous, humble, confident. " Because the priesthood, Sarah recalls, recalling Ratzinger's intervention, is a charism that comes from above: "By separating celibacy from the priesthood, we will no longer grasp the charismatic character of the priesthood". This "myopia" will prevent us from grasping the mystery of the Church: "Celibacy - concludes Sarah - is a bulwark that allows the Church to avoid the trap that would lead her to consider herself a human institution, whose laws would become efficiency and functionality.»