The Church commemorates the holy apostles Jude Thaddeus and Simon the Zealot, also known as the Canaanite, on the same day. According to various ancient sources they suffered martyrdom together in Persia, where they met after evangelising other regions. 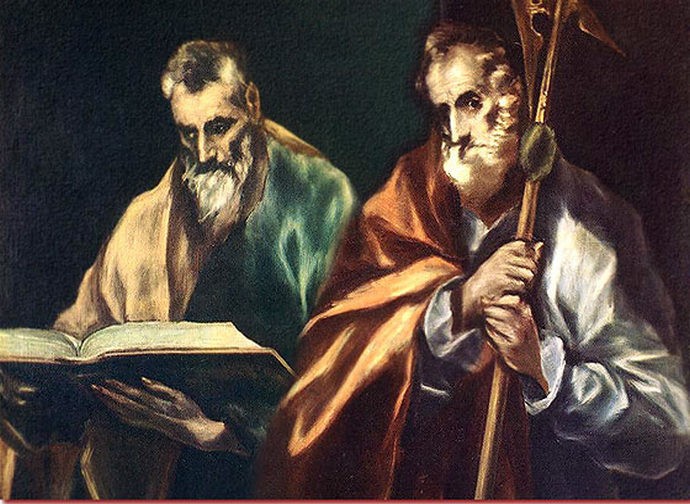 The Church commemorates the holy apostles Jude Thaddeus and Simon the Zealot, also known as the Canaanite, on the same day. According to various ancient sources they suffered martyrdom together in Persia, where they met after evangelising other regions. Thaddeus and Simon managed to convert many Persians before an anti-Christian uproar led them to a temple of pagan idols. The two refused to deny Jesus Christ and gave one last sign to their persecutors, preceded by the words of Thaddeus: “So that you may know that these idols that you worship are false, out of them will come the demons that will break them”. So it happened. And the apostles were slaughtered by the crowd, stirred up by the pagan ministers.

With regard to St Simon, it is the evangelist Luke who reports that he was nicknamed “Zealot”: before knowing and following Jesus, the apostle probably belonged to the political-religious movement of the Zealots, i.e. those who defended Jewish orthodoxy and rebelled against the Roman dominion, with some extremist deviations. Although he is perhaps the least known apostle, there are many works of art in which he is depicted, often with a saw, to recall the circumstances of his martyrdom.

Jude Thaddeus, known as the “Saint of the impossible”, is the apostle who at the Last Supper questioned Jesus about his manifestation: “Lord, how is it that You will reveal Yourself to us, but not to the world?” (Jn 14:22), and heard him answer: “If a man loves Me, he will keep My word. My Father will love him, and We will come to him, and make Our home with him. He who does not love Me does not keep My words”.  Since his father Alphaeus, according to the historian Hegesippus, was the brother of Saint Joseph, Jude Thaddeus was a cousin of Jesus: in this sense the word “brothers” appears in the Gospels according to Matthew and Mark. (cf. Mt 13, 53-57; Mk 6, 1-3). This term, used by people amazed at the miracles performed by Jesus, is due to the lack of words in Hebrew to indicate the different degrees of kinship (even though only Gospels written in Greek have come down to us, the original linguistic context and the fact that the word is within a direct discourse must be considered).

The canon of the New Testament includes the Letter of Jude, written by Thaddeus, who presents himself as “the servant of Jesus Christ and brother of James”, referring to the apostle whom the Synoptics call James son of Alphaeus, also known as the Lesser. The letter only comprises 25 verses, but is rich in meaning. Thaddeus exhorts us to defend the authentic faith, “which was transmitted to the saints once and for all”, warning against false teachers who “insult everything they ignore” and justify immorality, especially in the sexual field. The Apostle recalls the punishment of Sodom and Gomorrah for abandoning themselves to “vices against nature” and warns those who “defile their bodies, despise the Lord and insult the angels”. In the end he reminds the faithful of the reality of the eschatological battle and their duty: “Be merciful to those who are undecided and save them by pulling them out of the fire (...)”.