Before being deported together to Sardinia, at the beginning of the persecution of Maximinus the Thracian, the holy martyrs Pontian and Hippolytus (†235) had found themselves on opposite sides. Pontian was in fact the legitimate Pope, while Hippolytus was an anti-pope. 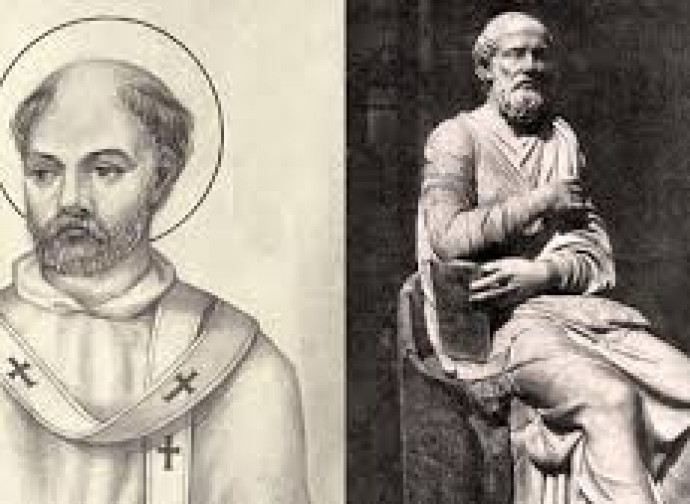 Before being deported together to Sardinia, at the beginning of the persecution of Maximinus the Thracian, the holy martyrs Pontian and Hippolytus (†235) had found themselves on opposite sides. Pontian was in fact the legitimate Pope, while Hippolytus was an anti-pope, the first in history.

Hippolytus was a priest and, according to some sources, was also a bishop. A cultured and prolific writer, he was probably originally from Asia Minor and wrote in Greek: this explains why his works have long enjoyed greater fortune in the East than in the West, where however there has been a rediscovery in contemporary times. He composed various commentaries on the Holy Scriptures, a book on the Antichrist, treatises against the heresies of Marcion and of the Montanists. To him is also attributed a compendium, entitled Apostolic Tradition (some passages of this work are mentioned in the Catechism), whose value lies in the fact that it records prayers, formulas and liturgical uses of the early Church. There is also a chapter dedicated to the importance of the sign of the cross, in which it recommends: “Strive in all circumstances to touch your forehead worthily. This sign of the Passion is a sure means against the devil, provided that you do it in a spirit of faith and not for ostentation, knowing how to shelter yourself with it like a shield”.

Hippolytus arrived in Rome during the pontificate of St. Zephyrinus (199-217) and ended up accusing him of weakness in contrasting the heresies of the time (above all Monarchianism, which denied the Holy Trinity). He also unjustly accused the deacon of the pope, St. Callixtus, of heresy. Hippolytus himself had developed an imprecise Christological doctrine and this contributed to the confusion. In the end, when Zephyrinus died and Callixtus (217-222) was elected as his successor, Hippolytus rebelled and accepted to be elected by a group of followers, becoming antipope and considering himself representative of the true Church. The schism continued during the pontificates of St. Urban I (222-230) and the other saint commemorated today, Pontian (230-235).

Then came the year 235, which saw the assassination of Emperor Alexander Severus, who was tolerant of Christians, and the seizing of power by Maximinus the Thracian, who immediately showed his aversion to Christianity and in particular to the clergy. The new emperor had both Pope Pontian and Hippolytus deported to Sardinia, condemning them ad metalla, i.e. to forced labour in the mines. On 28 September, already on the island, the Holy Father, finding himself now unable to govern the Church, abdicated (the Liberian Catalogue uses the expression discinctus est). A few weeks later Anterus (†3 January 236) was elected in his place. He would lead the Barque of Peter for about forty days, before suffering martyrdom in his turn. In the meantime Hippolytus, probably struck by Pontian’s charity and his ecclesial love in that extreme trial, returned in communion with the Church, indicating that he was following the legitimate Pope.

Pontian died between October and November 235 following the privations and inhumane treatment to which he was subjected. In the same period Hippolytus also went to meet his Maker. As St. Damasus wrote in an epigram, thanks to the fidelity shown to Christ and His Vicar on earth “at the time when the sword tore at the bowels of the Church, he deserved to be our martyr”. Then another saint, Pope Fabian (236-250), had the mortal remains of the two martyrs moved to Rome. As we learn from the Depositio Martyrum, which gives August 13th as the day of their burial, Pontian was buried in the Catacombs of St. Callixtus, and Hippolytus along the Via Tiburtina.