The oldest written source on the martyrdom of St Maurice (†287) and his companions of the Theban Legion, led by him, is the Passio Agaunensium martyrum. This was written in the 5th century by St Eucherius of Lyon. 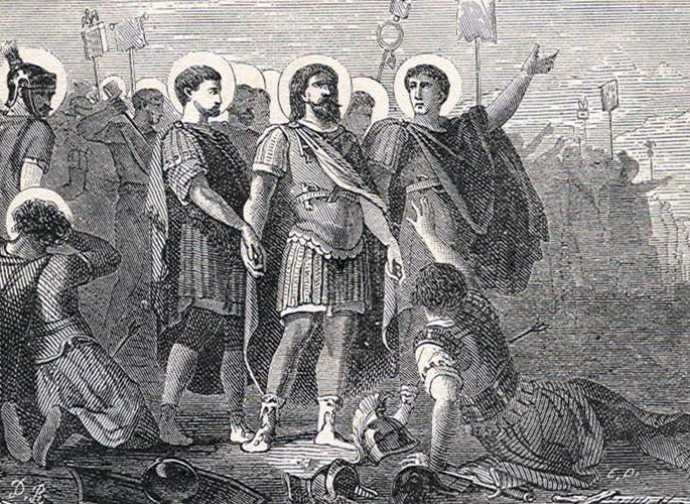 The oldest written source on the martyrdom of St Maurice (†287) and his companions of the Theban Legion, led by him, is the Passio Agaunensium martyrum. This was written in the 5th century by St Eucherius of Lyon on the basis of information handed down first by Theodore of Sion, patron saint of the Valais Canton, and then by Isaac, bishop of Geneva.

According to Eucherius’ account, the Theban Legion was made up of Christians and was called from the East to the rescue of Maximian, who was engaged in defending the empire in Central Europe. At one point, Maximian ordered the soldiers to make sacrifices in honour of the pagan gods to ask for the success of the military campaign and presumably the extermination of populations that had become Christians. Maurice and his men did not obey (according to some sources the Legion was composed of 6600 men). This unleashed the wrath of Maximian, who ordered their decimation, without however succeeding in discouraging the survivors, who were all eventually killed at Agaunum, present-day St-Moritz, in Switzerland. The most recent edition of the Roman Martyrology for today’s date bears the names of Maurice (patron saint of the Alpini, the Italian mountain infantry corps; several religious orders of chivalry have been established in his honour), Exuperius, Candidus and Victor.

The same names are present in the Passio by Eucherius, which also contains a letter with which the Christian soldiers tried to explain to Maximian why they could not obey: "We are your soldiers, Sir, but also servants of God, which we frankly acknowledge. To you we owe military service, to Him we owe innocence. From you we receive our wages, from Him we received our lives. We cannot therefore obey you by offending God [...]. So, we keep our weapons, but we will not resist [...], we would rather die innocent than live guilty [...]. We acknowledge that we are Christians, therefore we cannot persecute Christians".