Today the Church jointly celebrates Saints Anne and Joachim, parents of the Virgin Mary and therefore elected instruments in God's plan of salvation. Their story is not told in the canonical Gospels, but appears for the first time in the apocryphal Proto Gospel of James, a text written in the middle of the second century and with Gnostic accents. 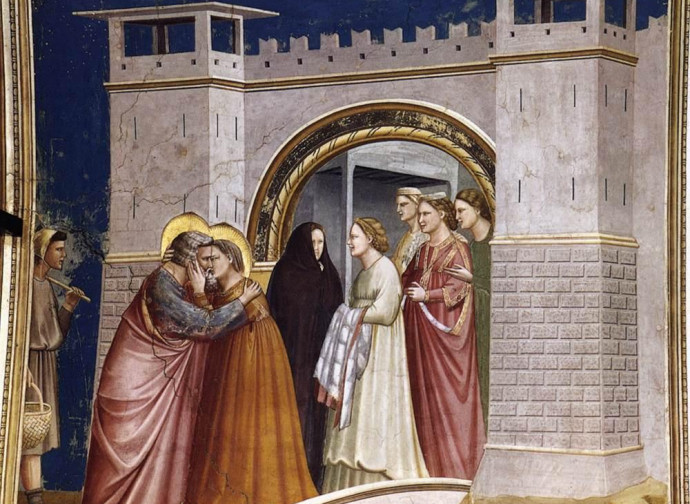 Today the Church jointly celebrates Saints Anne and Joachim, parents of the Virgin Mary and therefore elected instruments in God's plan of salvation. Their story is not told in the canonical Gospels, but appears for the first time in the apocryphal Proto Gospel of James, a text written in the middle of the second century and with Gnostic accents. However, Christian tradition has accepted as truthful some of its information, mainly with reference to the presentation at the temple of Mary and the names of her parents. The name Anne is of Jewish origin and means “favour”, “grace”. Jewish is also the name Joachim, which according to the two possible derivations has the meaning of “established by YHWH” (the sacred Tetragrammaton indicating the name of God) or “raised by YHWH”. Since the Proto Gospel mentioned above, the stories about the two saints have been enriched over the centuries with details, sometimes discordant, which have stimulated a vast iconographic production.

Saint Anne is often depicted with a green cloak, a symbol of the hope she gave to the world by conceiving Mary Immaculate, Mother of the Saviour. The Jesuit John Croiset (1656-1738) wrote about her: “One cannot give a nobler, higher and at the same time truer idea of the extraordinary merit, the eminent virtues and the sublime holiness of St. Anne than by saying that she was the mother of the Mother of God; this august quality holds all the titles of honour; she alone is valid for all praise; and as the Holy Spirit could give no higher praise of Mary than to say that it was She from whom Jesus Christ was born [...] so nothing more glorious can be said about St. Anne than that it was she from whom the Virgin Mary was born”.

The iconography also gives us the beautiful image of the meeting of Anne and Joachim, whose marriage had not yet produced children, at the Golden Gate of Jerusalem. Here they exchanged a chaste kiss, after they had both separately been told by an angel of their imminent conception. There is also a trace of this mystery at the beginning of Mary's life in the ecstatic revelations of Blessed Anne Catherine Emmerich (1774-1824), who said of the Virgin: “She too was conceived under her mother's heart by the intervention of the Divine Spirit at the solemn moment when Joachim and Anne met at the foot of the Golden Gate of the Temple”.

Joachim was of the Davidic lineage, a detail that is in agreement with Isaiah's prophecy concerning the coming of the Messiah: “And there shall come forth a Rod out of the stem of Jesse, and a Branch shall grow out of his roots” (Is 11:1). Divine grace made him and Anne the grandparents of Jesus. Certainly their earthly existence must have been rich in virtues, which they transmitted above all to their glorious daughter. Saint John Damascene said of them: “Since it had to happen that the Virgin Mother of God was born of Anne, nature did not dare to precede the seed of grace; but it remained without its own fruit so that grace might produce its own. For the firstborn child was to be born from whom would be born the firstborn of every creature: And He is before all things, and by Him all things consist (Col 1:17). O happy couple, Joachim and Anne! Every creature is indebted to you, because through you the creature offered to the Creator the most pleasing gift, that chaste mother, who alone was worthy of the Creator”.

Their cult spread first in the East and then in the West, though they were celebrated on separate dates. The Catholic Church unified their liturgical celebration with the 1969 calendar reform. To Saint Anne are linked multiple patronages (mothers, mothers in childbirth, cabinetmakers, laundresses, goldsmiths, tailors, turners, etc.), churches and religious congregations.