He was one of the most shining examples of charity working through the Church, so solicitous in helping the poorest and so brilliant that his legacy lives on thanks to the institutes he founded. 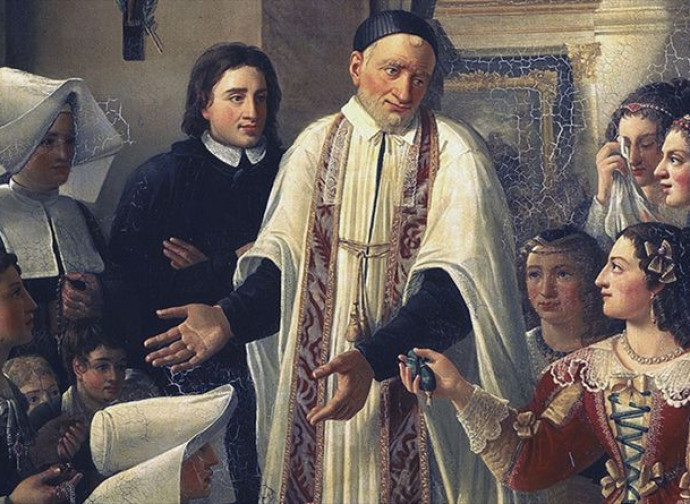 After the first years of his youth spent in the fields of Gascony helping his family, Vincent entered a Franciscan boarding school, where he stood out for his intelligence. He was ordained a priest in 1600. Five years later - while travelling on a ship - he was captured by Turkish pirates and sold in Tunis as a slave. Two years later he regained his freedom, after having converted his last master, a renegade monk who had become a Muslim for money.

The experience of slavery made him develop a desire to bring comfort to convicts. It was a wish that he was able to fulfil when he was appointed Royal Chaplain of all the French galleys. Decisive were his meetings with two protagonists of the Catholic Reformation, Cardinal Pierre de Bérulle and Saint Francis de Sales, who inspired him to condense in his Rules the principal virtues of Vincentian spirituality, also known as the “Five Stones of David”: simplicity, humility, meekness, mortification, zeal for the salvation of souls. “It is not enough that I love God if my neighbour does not love him,” he taught.

The Marquises of Gondi wanted him as preceptor of their children and with their support the Congregation for the Mission was born, made up of clerics who preached to the rural poor (later called “Lazarists”), and the female branch known today as Daughters of Charity, which Vincent entrusted at a certain point to the widow Louise de Marillac. She was also a saint. The Daughters of Charity spread like wildfire in France and neighbouring countries, bringing relief to orphans, the sick, the disinherited, the elderly, always aware that behind all human misery lies the face of Christ. He was very critical of Cardinal Mazarin's policies. The Queen created the Ministry of Charity for him, so that he could look after the poor throughout France. Of the greatest theological virtue he said: “When charity dwells in a soul, it takes full possession of all its powers; it gives it no rest; it’s a fire that’s constantly active”.