The first Hungarian king was a pivotal player in the Christianization of the Magyar country. He encouraged the establishment of Christianity with various laws and availed himself of the help of the Cluniac monks for the evangelization of the country. 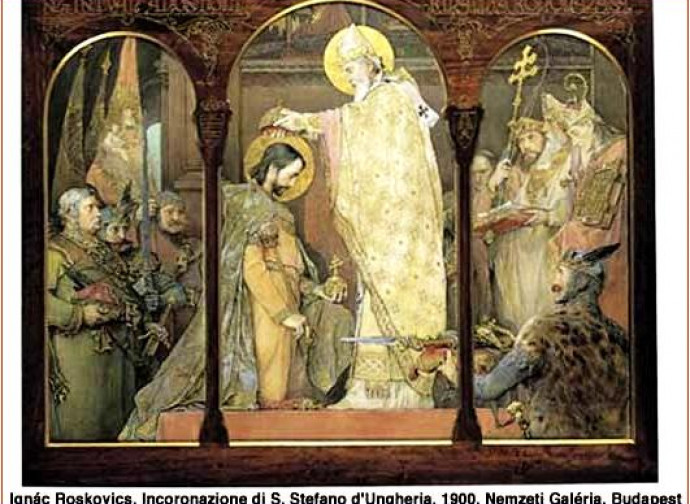 The General Roman Calendar commemorates today, one day after he returned to the House of the Father, Saint Stephen of Hungary (c. 975-1038), the first Hungarian king and a pivotal player in the Christianization of the Magyar country. In Hungary, however, his liturgical feast day is 20 August, which is at the same time a national holiday, commemorating both the transfer of his relics and the founding of the State.

Son of the tribal leader Géza, at birth he received the pagan name of Vajk; it was changed to Stephen when he was baptized at ten years old together with his father. Unlike his father, who apparently did not experience a real conversion (sources say that he mixed pagan and Christian worship), Stephen developed a fervent devotion. Around the age of twenty he married Gisela of Bavaria, sister of St Henry II and declared blessed, who contributed with her husband to the spread of Christianity.

After the victory over the other Magyar nobles, he was elevated to the rank of king on 20 August 1000, a date which - as mentioned - represents a watershed in the history of the Hungarian nation. In that same year Pope Sylvester II gave him through Astrik (first abbot at Pannonhalma Abbey and later appointed bishop) a golden crown together with an apostolic cross and a letter of blessing, recognizing him as a Christian king. Stephen's coronation took place on 25 December 1000 (or the following 1 January). In the following six years the sovereign succeeded in unifying practically all the Hungarian tribes.

He encouraged the establishment of Christianity with various laws and availed himself of the help of the Cluniac monks for the evangelization of the country, keeping in touch with Saint Odilo of Cluny. Among his most important acts were the organization of Hungary into ten dioceses, the erection of several monasteries, and the order to build a church for every ten villages. With the pilgrimages to the Holy Land and the safety of the faithful at heart, he had accommodation built in Jerusalem for Hungarian Christians. He proved to be a just king on the domestic front and shrewd in foreign policy. His wife Gisela gave him three children but only Emeric, also a pious Christian, reached adulthood. After years of reign, Stephen was planning to abdicate in favour of the latter and to dedicate himself to a more intense contemplation of God, but in 1031 Emeric was mortally wounded by a boar during a hunting trip.

Thus meditated the father in his son's eulogy: “By an inscrutable divine design death has taken him, so that evil cannot corrupt his soul and deceitful thoughts cannot deflect his mind, as the Book of Wisdom teaches for untimely deaths”. Stephen returned his soul to God seven years later, on the feast day of the Assumption. According to a tradition, on his deathbed the saint entrusted the kingdom and the nation to the Virgin Mary. In 1083 he was canonized by Gregory VII together with Emeric.