First a desert father and then founder of a particular type of monastery, called “lavra,” Saint Sabbas the Archimandrite (439-532) played a substantial role in the spread of Eastern monasticism. 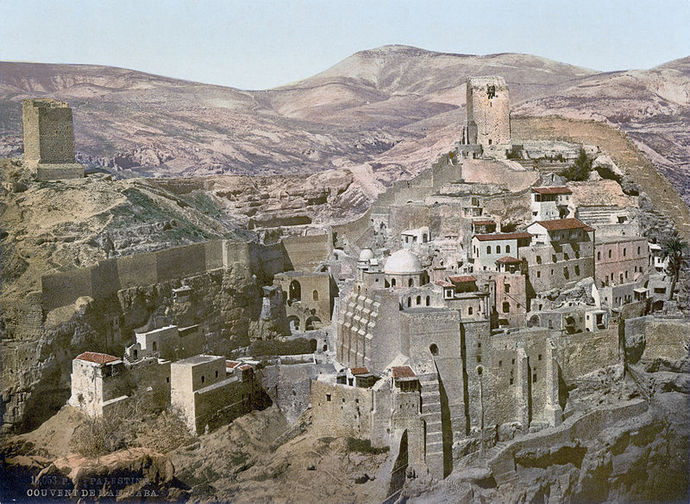 First a desert father and then founder of a particular type of monastery, called “lavra,” Saint Sabbas the Archimandrite (439-532) played a substantial role in the spread of Eastern monasticism. Born to a prosperous Christian family of Cappadocia, in modern-day Turkey, he had studied at a monastery where in addition to receiving an education he had been attracted by the life that was led there, developing the desire to become a monk, in spite of his father’s wishes to get him started on a military career.

Around the age of 18 he therefore decided to go on pilgrimage to the Holy Land, where he experienced both life in common in the cenobium and solitary life. He found a valuable guide in Saint Euthymius the Great (377-473), who lived as an anchorite in the deserts of Palestine and had founded various lavras there, meaning monastic settlements with a mixed form of life combining the cenobitic and the eremitic: the lavra originally indicated a collection of caves or cells (with a church in the middle), where the monks spent most of their time in solitude in prayer or in work, meeting together on Saturday and Sunday to celebrate the Eucharist. Their leader was a priest who carried out functions similar to those of an abbot and maintained relations with the world, especially to obtain their modest food supplies.

After the death of master Euthymius, Sabbas moved to the area of Bethlehem and founded a lavra there, afterward called the Great Lavra of Mar Saba, because of its dimensions and the great number of monks who over the years went to live there (above, a photo of the monastery of Mar Saba in 1900), making it one of the most famous monastic communities in the ancient world, the place where about two centuries later Saint John Damascene would also live. Sabbas, who in the meantime had become a priest and had been appointed archimandrite by the patriarch of Jerusalem, led the monks with patience and authority, following the rule of community life set by Saint Pachomius in the fourth century, leaving for a certain period on account of disagreements with some of his confreres and going to found another lavra in Gadara, in Jordan.

He was then called back to Jerusalem because his energy and wisdom were needed, not only for the discipline of the monks but also in opposing the Christological heresies. He helped to defend the Catholic doctrine on the coexistence of the human and divine nature in the one person of Christ, solemnly affirmed at the council of Chalcedon in 451. To this end he fought Nestorianism and was charged with leading a Palestinian delegation to Constantinople in the attempt - which turned out to be in vain - to convince the Byzantine emperor Anastasius to abandon monophysitism (the heresy elaborated by the Eastern monk Eutyches, which denied the humanity of Jesus, attributing to him the divine nature alone and thus denying his sufferings in the flesh) and to accept the canons of Chalcedon.