Rosalia was born into a family of the high nobility, namely Count Sinibaldo de' Sinibaldi and Maria Guiscardi, who had close ties of kinship with the Norman Hauteville dynasty. The day before her wedding, while she was looking in the mirror, she saw reflected the image of Jesus suffering. Later, she lived in caves dedicating herself to penance and contemplation of God 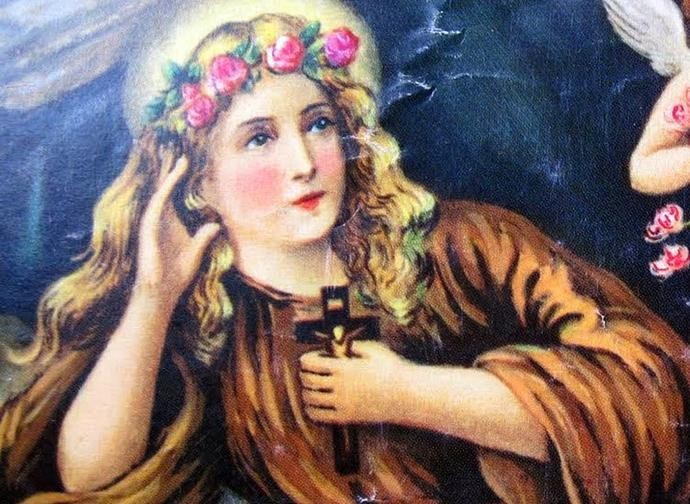 On Monte Pellegrino, the promontory symbol of Palermo, there is a sanctuary built inside a natural cave oozing water. It is there that Saint Rosalia (c. 1130-1170), for the people of Palermo “la Santuzza”, lived the last phase of her earthly life. Tradition reports that Rosalia was born into a family of the high nobility, namely Count Sinibaldo de' Sinibaldi and Maria Guiscardi, who had close ties of kinship with the Norman Hauteville dynasty. The girl was raised in the Christian faith and educated between her father's villa and the court of Roger II. She was very beautiful and around the age of 15 a nobleman named Baldwin asked for her in marriage. The day before the wedding, while she was looking in the mirror, she saw reflected the image of Jesus suffering, as would be revealed to the servant of God Maria Roccaforte (1597-1648), a Benedictine mystic from Bivona (province of Agrigento), who was very devoted to the saint and in order to learn about her life had offered prayers and fasting to Our Lady.

The young woman clearly understood God's will for her. She returned to the Royal Palace with her braids cut, declined the offer of marriage, made her vocation known and left everything behind, retiring to the nearby Basilian monastery of the Most Holy Saviour. The continuous visits of her parents and her former betrothed, who tried to dissuade her, convinced her that the time had come to leave Palermo. She gave the nuns a letter in Greek and a wooden cross and took refuge in her father's estates in Santo Stefano Quisquina, about eighty kilometres from the Sicilian capital, near a cave she had visited at an early age. She lived in that cave for seven years, dedicating herself to penance and contemplation of God. But after being discovered by some local inhabitants she changed her refuge and for another five years she lived in a cave on the Monte delle Rose, in the territory of Bivona.

After a total of 12 years, the still young Rosalia returned to her Palermo and stayed there until the day she went to Heaven, on 4 September (around 1170), in the already mentioned cave on Mount Pellegrino, where there was a small church in Byzantine style, run by Benedictine monks. Her cult began early and is attested as far back as at least 1196, in a Codex presumably belonging to Constance of Hauteville, as well as in an ancient wooden panel and an altar of the 13th century. Palermo also dedicated two chapels to her, but over time her veneration faded, until an extraordinary revival in 1624. It was then that Providence shone a light on the virtues of its most humble daughter, who had chosen to live in hiding to consecrate herself entirely to God.

In that year, while Palermo was afflicted by the plague, a sick woman named Girolama Gatto was healed through the intercession of the saint and, after receiving precise indications from Rosalia, she told the Franciscan friars the exact location of her relics, which were found on 15 July. About forty days later, two bricklayers from Palermo on their way to Santo Stefano Quisquina found an inscription in Latin in a cave, which read: “I Rosalia, daughter of Sinibaldo della Quisquina and [del Monte] delle Rose, for the love of my Lord Jesus Christ, have decided to dwell in this cave”. On 13 February 1625 Rosalia appeared to the soap-maker Vincenzo Bonelli, who had lost his very young wife to the plague and had climbed Mount Pellegrino with the intention of committing suicide.

The saint urged him to desist and asked him to inform Cardinal and Archbishop of Palermo Giannettino Doria that the bones found the year before were really her own. She added that they had to be taken in procession because the Blessed Virgin had promised her that the epidemic would stop when the relics passed by, accompanied by the singing of the Te Deum. As proof of the truth of her words, guaranteeing him the salvation of his soul, Rosalia told Bonelli that he himself would suddenly contract the plague and die of it after reporting everything to Cardinal Doria, who - because of the series of events - would believe him. And so it was. The solemn procession took place on 9 June 1625 and since then the plague began to regress rapidly, until it disappeared completely. The noble hermit was elected Patroness of Palermo, soon becoming one of the three most popular Sicilian saints, next to the two great martyrs of antiquity, Saint Agatha and Saint Lucy.