Saint Polycarp (ca. 69-155), one of the Church Fathers, had the grace of being a direct witness of the charisms of the apostles; he was a disciple of Saint John the Evangelist, who consecrated him Bishop of Smyrna. 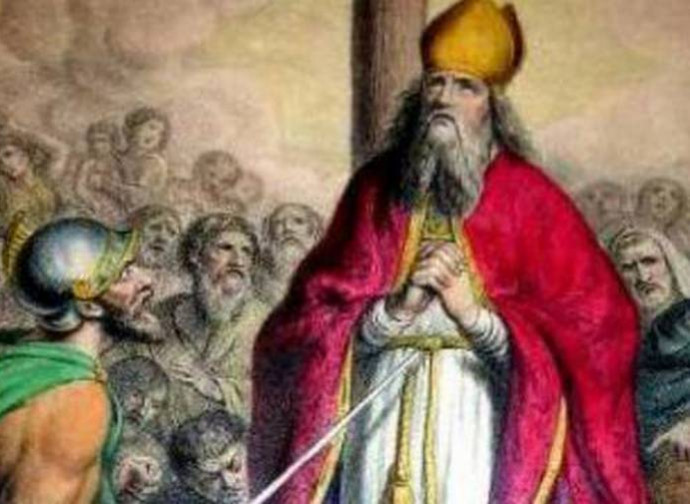 Saint Polycarp (ca. 69-155), one of the Church Fathers, had the grace of being a direct witness of the charisms of the apostles; he was a disciple of Saint John the Evangelist, who consecrated him Bishop of Smyrna. He became highly esteemed for his theological doctrine, and was the teacher of Saint Irenaeus of Lyons (ca. 130-202), also a native of Smyrna. In addition to the privileged relationship with Saint John – who converted Polycarp around the year 80, when the latter was just a boy – Irenaeus tells us that his teacher "frequented many of those who had seen the Lord" and taught always what he had learned from the Apostles and from the Holy Scriptures.

Of his numerous writings, only few have survived, including the Letter of Polycarp to the Philippians, which shines through with his profound faith and humility. A precious document on the primitive Church, it is rich in scriptural quotes and exhortations to young people, women, virgins, deacons, priests and all the faithful, who are invited to persevere in the virtues and in the correct doctrine.

Polycarp was a friend of Saint Ignatius of Antioch, the great bishop and martyr who at the time of his escorted trip to Rome (where he was devoured by wild beasts) stopped for a while in Smyrna, entrusting to Polycarp the Christians of Antioch, together with several of his letters. Due to the admiration he enjoyed throughout the Christian East, Polycarp was appointed to go to Rome and discuss the question of the date of Easter with the pope, Saint Anicetus. They could not agree on this point but, as Eusebius reports in his Ecclesiastical History, "they gave each other Communion" and said goodbye in peace. Furthermore, before leaving Rome, Polycarp had brought back to the Church many Christians who had been led astray by Marcion, who rejected the Old Testament and a good part of the New (in practice, all passages that disagreed with his ideas) and supported the Docetist heresy, which negates that Jesus had suffered in the flesh. One day Marcion came up to him and said: "Recognise us!" The Saint replied: "I recognise, I do recognise that you are the firstborn of Satan."

His martyrdom, occurred shortly after his return to Smyrna, is told in the Martyrium Polycarpi, the first Christian work of its kind and written close to the facts, in 155-156, in the form of a letter from the Church of Smyrna. While the persecutions raged, some Christians urged the elderly bishop to abandon the city, but he decided to stay. When the soldiers found his refuge, Polycarp went out to meet them with serenity, offering them food and drink and asking only for an hour to pray, while those men wondered why the authorities wanted to capture such a holy man. He prayed with so much love "that for two hours he could not be interrupted." He was then led to a senior official, who tried to convince him to offer sacrifices to the emperor. Having refused, he was taken to the stadium where the Christians were tortured, and then he heard a voice from Heaven: "Come on Polycarp, be strong." Nobody saw who had spoken, but "those of ours who were present heard the voice."

The Proconsul Statius Quadratus offered him another possibility to abjure and asked him to say, "Down with the atheists!", because such were considered those who did not venerate the pagan deities. Polycarp, who, instead, considered atheists non-believers in Christ, looked at the crowd of pagans, sighed and, rolling his eyes, said: "Down with the atheists!" Invited then to curse Christ, he replied: "I have served him for 86 years and he has done me no harm. How could I insult my King who saved me?" The threats to expose him to wild beasts and fire were of no avail. The Proconsul sent the herald to shout three times in the middle of the stadium: "Polycarp has confessed to being a Christian". The stake was then prepared, which Polycarp accepted with joy, blessing God: "Lord [...], I bless you because you made me worthy of this day and this hour to take part in the number of martyrs at the cup of your Christ, for the resurrection to eternal life of soul and body".

At the end of his prayer of praise the fire was set and then, so continues the letter from the Church of Smyrna, "we saw a prodigy and were allowed to see it. We survived to tell others about these events". The flames circled around the Saint's body, without touching it, while a smell of incense was spreading. Eventually, seeing that the fire did not consume him, it was ordered that he be pierced with a dagger, so Polycarp became the twelfth Christian to suffer martyrdom in Smyrna.