An impressive number of achievements were accomplished in the six years of the pontificate of Saint Pius V (1504-1572), one of the greatest figures of the Catholic Reformation, who defended the true faith against heresies and linked his name to the Battle of Lepanto. 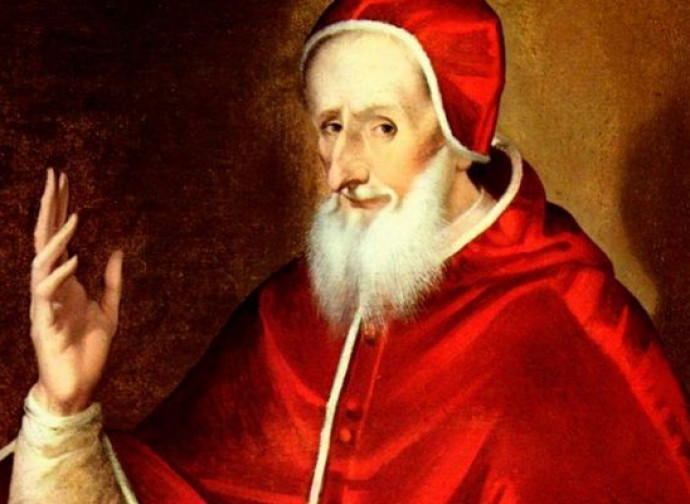 An impressive number of achievements were accomplished in the six years of the pontificate of Saint Pius V (1504-1572), one of the greatest figures of the Catholic Reformation, who defended the true faith against heresies and linked his name to the Battle of Lepanto.

Born Antonio Ghislieri, he was from a noble but impoverished family. At the age of 14 he joined the Dominicans, taking the religious name of Michele. He soon aroused the admiration of his superiors for his brilliant mind and austere lifestyle. He matured a solid Thomist preparation (as pope he ordered the study of the Summa Theologica in universities). He was then able to dedicate himself to the teaching of theology, distinguishing himself at the same time as a wise prior in several convents between Piedmont and Lombardy. Because of his virtues, in 1542 he was called to the Holy Inquisition, where he gradually took on roles of increasing importance, contrasting and confuting the Protestant heresy.

After his roles as Inquisitor, he received episcopal ordination (he was bishop of Sutri and Nepi and then of Mondovì) and cardinalship, but the saint never lost his humility and continued to live as an ascetic. At the death of Pius IV in December 1565, Antonio Michele Ghislieri was therefore one of the most prominent figures in the Church – at the time in full reforming ferment, following the Council of Trent (1545-1563) – but at the beginning of the conclave he was not among the major papal candidates. It was above all the support of the much younger Saint Charles Borromeo that favoured his election to the papal throne on 7 January 1566. As new pope he lost no time in implementing the Tridentine decrees. Among his first acts was the order to publish the Roman Catechism, a work that had been commenced under the previous pontificate and that would give priests an authoritative doctrinal basis for teaching the truths of faith to the laity.

He had the new Breviary and the new Missal published, promoted the devotion of the Rosary, disciplined the rule of cloistered life for female orders, established the obligation of residence for bishops, fought simony and nepotism, and eliminated all superfluous expenses of the Papal See, to the point of having the papal attire of his predecessors adapted to his physique. With the bull Horrendum illud scelus he firmly condemned sodomy in the clergy, whose moral reform he felt was crucial for the salvation of souls. He used to say that “bad priests are the ruin of the people” and that “the evils caused by so many heresies have their origin in the corrupt customs of the clergy”. He was equally concerned to restore the moral sense of the people, providing sanctions for blasphemers and adulterers, expelling many courtesans from Rome and trying to limit prostitution. Always paternal with the poor and the sick, he provided for them a prudent distribution of food and money. He took care to promote health services.

He was no less decisive in his relations with the powerful of Europe, which made him several enemies. In the conflict between the Catholic Mary Stuart and the Anglican Elizabeth Tudor, he supported the former and excommunicated the latter. Faced with Muslim expansionism, whose last act had been the attack on the island of Cyprus, Pius V promoted the formation of the Holy League. On October 7, 1571, after a “crusade” of Rosaries to ask for the help of Providence, the Holy League defeated the fleet of the Ottoman Empire in the waters of Lepanto. The messengers arrived in Rome only 23 days later, but the saint had already learnt in a vision  of the historic victory on the same day of the Battle, ordering: “It is 12 o'clock, ring the bells, we have won at Lepanto through the intercession of the Blessed Virgin”. Thus was born the feast of Our Lady of Victory, now called the feast of the Blessed Virgin Mary of the Rosary.

To the cardinals gathered round his deathbed, he said: “I commend to you the Holy Church that I have loved so much! Try to elect a zealous successor to me, one who seeks only the glory of the Lord, who has no other interest here than the honour of the Apostolic See and the good of Christianity”.