The “martyr of love” reminded the world, in the midst of the destruction of mankind in the Nazi concentration camps, of all the fruitfulness and power of faith, sacrificing himself to save a family man 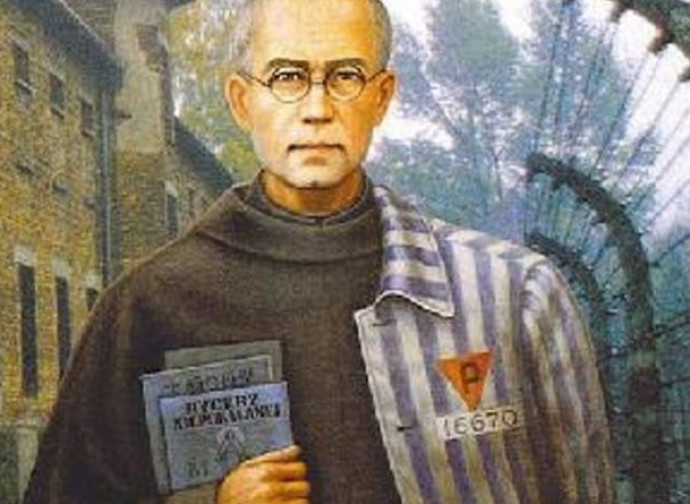 “Put your trust totally in Divine Providence through the Immaculate and worry about nothing”, is the teaching at the heart of the spirituality of St Maximilian Mary Kolbe (1894-1941). The “martyr of love” reminded the world, in the midst of the destruction of mankind in the Nazi concentration camps, of all the fruitfulness and power of faith, sacrificing himself to save a family man.

The second of five children, he was born in Poland to two fervent Catholics, who baptized him on the day of his birth with the name Raymond. When still a child he had a vision of the Virgin handing him two wreaths of flowers, one of lilies, symbol of virginity, the other of red roses, symbol of martyrdom. He accepted them both. At the age of 16 he donned the habit of the Conventual Franciscans, taking the name of Brother Maximilian; and four years later, when he professed his perpetual vows, he added that of Mary.

By then he was living in Rome, where he graduated in philosophy and theology. The Rosary and Eucharistic adoration were at the heart of his every day. Already during his years at the seminary some of his companions had realized that they had a saint among them, as Fr Giuseppe Pietro Pal would testify: “Maximilian's fraternal love was truly like that of the Gospel. When in our conversations we talked about how little the rules were observed in our seminary, he told me to pray for sinners. I never heard him speak ill of anyone. He suffered to see others break the rules.” Aware of the scourge of modernism and hatred against the Church spread by Freemasonry, on 16 October 1917, together with six companions, he founded the Militia of the Immaculate The idea was to consecrate to God, through Mary, as many souls as possible, helping them to gain eternal salvation. “He who has Mary for a mother, has Christ for a brother,” he taught.

The saint knew well that genuine faith is incarnated in the militant Church, called to fight the Evil One and make God known and loved, working to establish His Kingdom with Mary's help. To this end, already suffering from tuberculosis, he began a magazine, The Knight of the Immaculate. He was convinced of the need for an apostolate through the media, to spread the beauty of the truths of faith and morality, already at the time attacked by “countless propagators”. He said: “A missionary of the pen [...] forms public opinion, mitigates the aversion to Catholicism, clarifies and slowly removes from the mind inveterate objections and hindrances, predisposes to a gradual loyalty to the Church and in time [...] to trust, finally to the desire to know religion more deeply”.

His ideas and charity inflamed a multitude of young people with enthusiasm. His magazine reached a circulation of millions of copies. In 1927 he founded in his homeland a convent called Niepokalanów (“City of the Immaculate”), which had a printing press and a seminary dedicated to the mission: in ten years it had developed around a citadel and housed over 700 friars. He exported the same model to Nagasaki, where the Mugenzai no Sono (“Garden of the Immaculate”) would welcome war orphans. He founded a radio station, SP3RN (Polish Station 3 Radio Niepokalanów), and for this reason he is the patron saint of radio amateurs. After the invasion of Poland the Nazis imprisoned him for almost three months together with 37 other confreres. Once set free, the Franciscan returned to the “City of the Immaculate” transforming it into a hospital and refuge for thousands of Jews and the wounded.

He was finally arrested by the Gestapo on 17 February 1941 and in May he was transferred to Auschwitz. The escape of a prisoner triggered the harsh Nazi 'law': ten prisoners were condemned to starve to death in Block 13. Among them was a family man, Franciszek Gajowniczek (on 10 October 1982 he would witness Father Kolbe's canonization), who spoke desperately about his wife and children. The saint offered to take his place. “Who are you?” the Nazis asked him. He, who had already secretly celebrated Holy Mass twice in the concentration camp, distributing the Body of Christ to about thirty prisoners, replied: “A Catholic priest”. The Nazis, surprisingly, accepted the exchange. The calm of the Polish priest impressed them and, as one witness would say, the head of the bunker considered him “a veritable superhuman hero”.

During the two weeks of isolation without food Fr Kolbe never complained. He comforted the other prisoners, spoke to them about Jesus' sacrifice and love, got them to pray and sing sacred hymns. On August 14, the eve of the Assumption, he and three other men were still alive. The SS decided to end it all with a phenol injection. It was then that to the infirmary chief he said: “You haven't understood anything about life, hate is useless... only love creates!”. He offered his arm to the executioner, saying his last earthly words: “Hail Mary.” The jailer testified: “When I reopened the iron door, he was no longer alive; but he looked to me as if he were alive. Still leaning against the wall. His face was radiant in an unusual way. His eyes wide open and concentrated in one spot. His whole body as if in ecstasy. I will never forget it”.