“They have taken away my Lord, and I know not where they have laid Him” (John 20:13). Together with her tears, these words that Mary Magdalene, the first to run to the tomb on the day of the Resurrection, uttered before the two angels in white robes remind us what a conversion this extraordinary saint lived through. 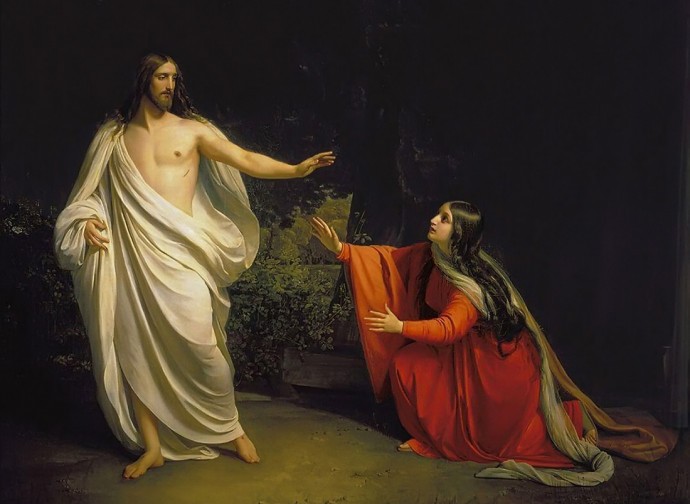 “They have taken away my Lord, and I know not where they have laid Him” (John 20:13). Together with her tears, these words that Mary Magdalene, the first to run to the tomb on the day of the Resurrection, uttered before the two angels in white robes remind us what a conversion this extraordinary saint lived through. As a humble penitent, she was able to accept Grace and became a faithful disciple of Jesus, deserving of being called “Apostle of the Apostles”.

Mary, also called “of Magdala”, after the name of the village on the lake Tiberias in Galilee, was the woman from whom Our Lord had cast out seven demons (Mk 16:9). There are no references in the Gospel text to associate her with the adulteress saved from stoning. What we do know was that once converted she began to follow Jesus, while the Son of God was proclaiming the Kingdom of Heaven in the company of the Twelve: with her there were also other women “who ministered unto Him from their substance” and who “had been healed of evil spirits and infirmity” (Lk 8, 1-3).

The great richness of her figure emerges clearly and splendidly in the account of the Passion, Death and Resurrection of Our Lord. The faithful disciple follows Christ to the summit of Calvary and stands under the cross close to John, the beloved disciple, and Mary Most Holy, sharing their sorrow. When Joseph of Arimathea has the piety to take care of the burial of Jesus, Mary of Magdala is one of the women (no doubt with “the other Mary”, the “mother of Joses” (Mt 27:61 and Mk 15:47) who wants to observe the place where the Lord is laid. And the first day after the Sabbath we find her again - “when it was still dark”, John informs us - rushing to the tomb, being shocked to see it empty. Shortly afterwards there is the moving encounter with the Risen One, who relieves her state of anguish by calling her by name (“Mary!”, to which she replies: “Rabbunì!”, that is, Master) and entrusts to her no less than the task of announcing the Resurrection: “Touch Me not, for I am not yet ascended to My Father; but go to My brethren and say unto them, ‘I ascend unto My Father and your Father, and to My God and your God’” (Jn 20:17).

Another proof, this latter one, that the evangelists neither invented nor changed anything. If they had followed human logic, in fact, they would have carefully refrained from entrusting the first proclamation of the Resurrection, the most important and specific event of the Christian faith, to the testimony of a woman. This is because, as Vittorio Messori has shown extensively in his writings, the testimony of women in the Jewish world and in general in antiquity was worth little or nothing. Instead, the stories in the post- apostolic age and common in Gnostic circles are rich in inventions, which are not even worth dwelling on, and which made the fortune of novelists à la Dan Brown.

Pope Gregory the Great called Saint Mary Magdalene “witness of the Divine Mercy” and dedicated a beautiful homily to her. The devotion felt by Christians of all times towards her led Pope Francis in 2016 to raise the liturgical degree of her celebration from Memorial to Feast. In the relative decree, signed by Cardinal Robert Sarah, Prefect of the Congregation for Divine Worship, she was indicated to the faithful as “a model of women’s role in the Church” and enlightening example for a new evangelization. May she guide us to seek and proclaim, as she did, the Risen Christ.