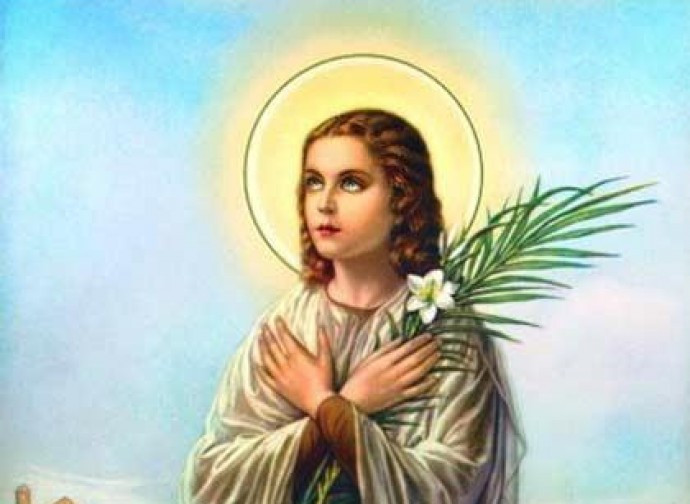 The second of six children of Assunta Carlini and Luigi, two humble labourers, was born on October 16th in the small town of Corinaldo in the Marche region, receiving her Baptism 24 hours after her birth. Her parents had a great faith and, as her mother would say, they took care to educate their children“so that they would grow up good Christians”. Marietta, as she was called, received Confirmation before her sixth birthday. In October 1897 she moved with her family to Paliano, in Lazio, where her parents, accepting the proposal of the landowner and Senator Giacinto Scelsi, worked as sharecroppers alongside Giovanni Serenelli and his young son Alessandro, who was motherless.

In 1899 she and her family were forced to move again and, together with the Serenellis, they settled in a count's farmhouse, in the middle of the Pontine Marshes, which had not yet been reclaimed. In those parts malaria was deadly and just a year later it took the saint's father, marking a real family drama for the Goretti family. Mamma Assunta, left alone to raise the six children, had to replace her husband in the work in the fields, while Marietta took over the housework. It was she who, though distraught with grief, strengthened her mother with her trust in Providence: “Mother, don't worry, God will not abandon us”. She looked for God and found him in everyday life. She would get up early in the morning before the others, say her prayers, see to the henhouse, prepare breakfast, wake her young siblings, help them prepare for the day and get them to pray.

She had a filial love for Our Lady. In the evening she knelt down with her little brothers and sisters to pray the Rosary, “which was as indispensable to her as the air she breathed”, her mother would testify. The neighbours often said to her: “What an angel of a daughter you have!”. Marietta could not read, but she had a great desire to learn “the doctrine” so that she could make her First Communion in advance - at that time it was usually received only after the age of 12. She multiplied her sacrifices so that she could attend catechism, which she then taught with enthusiasm to the family. On June 16, 1901 she received the Eucharistic Jesus for the first time. It was then that she matured the intention to die rather than commit sins, a fact common to other very young saints, such as Dominic Savio. Sunday Mass was the greatest joy for her and nothing prevented her from attending, neither the 11 kilometre walk, nor bad weather.

Taking advantage of her father's absence, the Serenelli father and son revealed their worst side. The elderly Giovanni molested, in vain, Assunta (“he dared to make infamous proposals to me”) and often left the Goretti family hungry. His son Alessandro tried several times to seduce Marietta, who always rejected his approaches, wishing to remain chaste. On July 5, 1902 Alessandro, then twenty years old, dragged the little girl into the kitchen, but heard her exclaim: “No, no, God doesn't want you to, if you do this you go to hell!”. Blinded by rage, he struck her repeatedly with an awl, inflicting 14 wounds. During the desperate attempts to treat her at the hospital, Marietta continually invoked the Virgin. She remained lucid and serene, despite the excruciating pain. On July 6th a medal was placed around her neck, which certified her enrolment in the Daughters of Mary. And those present saw her face light up. The priest finally asked her if she would forgive Serenelli: “Yes, for love of Jesus I forgive him, and I want him to come with me to Heaven”. At 15:43 that same day, when she was 11 years and 8 months old, the virgin and martyr Maria Goretti entered into eternal glory.

The graces of her holiness soon manifested themselves. Serenelli spent 27 years in prison, but as early as 1906 he saw the saint in a dream in the act of offering him lilies. After getting out of prison he asked Assunta for forgiveness on his knees. He worked as a gardener for the Capuchins for the rest of his life and on June 24, 1950 he was present at the canonization of Maria: the crowd of the faithful was such that for the first time the religious service was held in St. Peter's Square. Assunta, now elderly, witnessed the event from a window of the Apostolic Palace, becoming the first mother in history to hear her daughter's sanctity proclaimed.

Providence placed Maria Goretti as a lamp to let the light of Christ shine, before the Christian virtues she faithfully incarnated - from chastity to obedience to parents, from sacrifice to the concentration on heavenly goods - were subjected to the contempt of the feminist and 1968 movements, heedless of eternity. Virtues to which instead Serenelli looked with gratitude.

The converted murderer thus wrote in his spiritual testament: “I am almost 80 years old, about to end my days. Looking back, I recognize that in my early youth I took a false path: the path of evil that led me to ruin. I have seen through the press, shows and bad examples that the majority of young people follow that path, without a thought: and I too did not worry about it [...]. Maria Goretti, now a saint, was the good angel that Providence put on my path. I still have impressed in my heart her words of reproach and forgiveness. She prayed for me, interceded for me, her killer. [...] Maria was truly my light, my Protectress; with her help I behaved decently and tried to live honestly, when society accepted me back among its members. [...] Let those who read this letter of mine draw the happy lesson of escaping evil, of following the good, always, from childhood. Let them think that religion with its precepts is not something one can do without, but it is true comfort, the only safe way in all circumstances, even the most painful ones in life. Peace and all good!”