Saint Macrina the Younger (c. 324-380) is so called to distinguish her from her paternal grandmother Macrina the Elder, also a saint. She grew up in that family extremely rich in blessed souls, of which her brothers Basil the Great (c. 329-379) and Gregory of Nyssa (c. 335-395), both Fathers of the Church, are the two best known members. 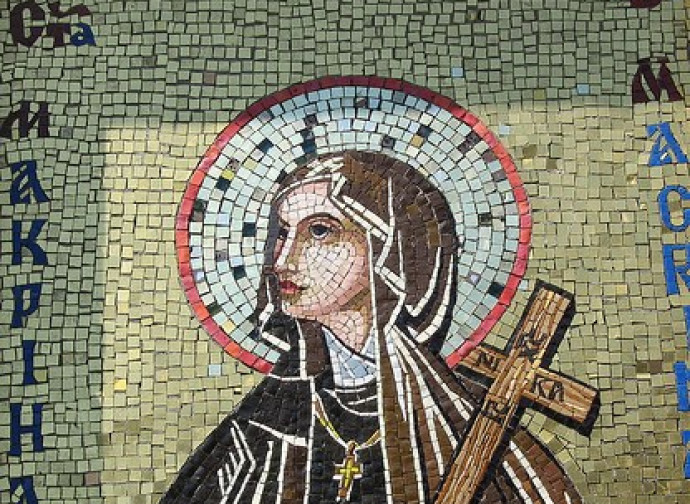 Saint Macrina the Younger (c. 324-380) is so called to distinguish her from her paternal grandmother Macrina the Elder, also a saint. She grew up in that family extremely rich in blessed souls, of which her brothers Basil the Great (c. 329-379) and Gregory of Nyssa (c. 335-395), both Fathers of the Church, are the two best known members, and whose rise to holiness was favoured precisely by the virtues of their elder sister. Macrina was the eldest of the ten children of Basil and Emmelia, both also venerated by the Church. Native of Caesarea in Cappadocia, she received a Christian education from her parents. Her faith also benefited greatly from the teachings of her grandmother whose name she bore, a figure of reference for all her grandchildren (as well as the patroness of widows) who had suffered the times of persecution with her husband, remaining steadfast in Christ.

Very beautiful and cultured, Macrina had been betrothed to a young man who died prematurely. She then decided to consecrate her virginity to God. She remained at home to take care of the education of her brothers, helping her mother, who was widowed after the birth of her tenth child. When Basil completed his studies in Constantinople and Athens, it was Macrina who exhorted him to take up the ascetic life. He followed his sister's advice, wandering between Syria, Palestine and Egypt and living in contact with the local anchorites, who inspired him to draft his famous Rule.

When all her siblings were grown up, Macrina convinced her mother to retire with her to monastic life in Pontus, and precisely in Annesi (today's Turkish city of Amasya), about a hundred kilometres from the Black Sea. With the help of a brother, Saint Peter of Sebaste, she founded a monastery there, which was first led by her mother and, after her death, by Macrina herself.

Until her last earthly day she continued to excel in humility, constancy in prayer, and wisdom, founded on the Holy Scriptures and the works of the ancient Fathers. After the death of Basil, which grieved him deeply, Gregory decided to visit their wise sister, now sick and close to ascending to Paradise, partly for consolation: with her he held a last intense spiritual dialogue on the truths of faith, which he then put in writing in the work On the Soul and Resurrection (De anima et resurrectione), referring to Macrina as "the Teacher".

Gregory also wrote a Life of his sister, in which he reported a beautiful prayer by Macrina on her deathbed, rich in biblical reminiscences: "Lord, you have freed us from the fear of death. You have made the sunset of our life the dawn of true life. [...] Eternal God, place at our side an angel of light to lead me by the hand to the place of nourishment, where the refreshing water gushes forth, in the bosom of the holy Fathers. If I have fallen because of the weakness of my nature, in words, actions, thoughts, grant me forgiveness, so that I may have solace and so that I may be found before you without blemish, at the moment when I am stripped of my body. So that my soul, holy and without blemish [Eph 5, 27], may be welcomed into your hands, like incense before you”. [Psalm 140, 141]

On the Soul and the Resurrection, St. Gregory of Nyssa