Saint Pius X not only recommended reading the Treatise on True Devotion to the Blessed Virgin, one of the masterpieces by St. Louis-Marie Grignion de Montfort (1673-1716), but he also granted in writing the Apostolic Blessing “to all those who will read this Treatise”. 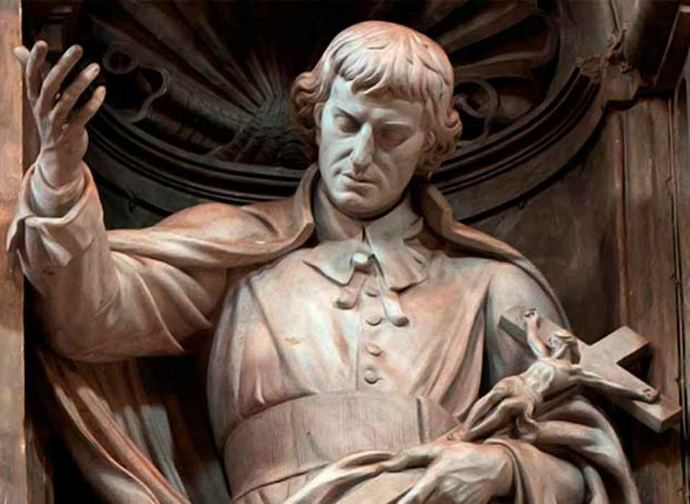 Saint Pius X not only recommended reading the Treatise on True Devotion to the Blessed Virgin, one of the masterpieces by St. Louis-Marie Grignion de Montfort (1673-1716), but he also granted in writing the Apostolic Blessing “to all those who will read this Treatise”. In the 1940s the young Karol Wojtyla, then a labourer in the Solvay stone quarries, always carried Montfort's booklet with him, from which he learned the meaning of authentic devotion to Our Lady: “While before I was holding back in fear that Marian devotion would screen out Christ instead of opening the way for Him” – Saint John Paul II would later write –  [...] “I understood that it was in reality quite otherwise. Our inner relationship with the Mother of God organically follows from our link with the mystery of Christ”. It was precisely the Treatise that inspired the Polish Pope with the motto Totus Tuus, the two initial words of the consecration to Jesus through the hands of Mary.

The second of 18 children, Louis was born into a deeply Christian family in Brittany. After studying at the Jesuit college in Rennes, in 1692 he moved to the Parisian seminary of Saint Sulpice: on that occasion his father offered him his horse, but the young man preferred to walk the roughly 350 km between Rennes and Paris. On the way he gave everything he had to beggars. He became a priest in 1700. The following year he went to Poitiers, where he began working as the hospital chaplain, which also served as a hospice for the elderly and homeless. Several times he was forced to leave the hospital and the city because of the hostility of some of the directors. This was counterbalanced by the affection of the needy, who went so far as to write a letter to Montfort's superior: “We, four hundred poor people, beg you very humbly, for the greatest love and glory of God, to return to us our venerable pastor, the one who loves the poor so much, Mr. Grignion”.

During that period he met the blessed Marie-Louise Trichet, who became the first of the Daughters of Wisdom, the Montfortist female branch, later followed by the male branch, the Company of Mary. In 1703 The Love of Eternal Wisdom, his first theological work, saw the light. In it Montfort exposed the centrality of the cross within the life of Christians and explained that Jesus is loved little because he is known little: “To know Jesus Christ, incarnate Wisdom, is to know enough. To know everything and not to know Him is to know nothing”. The writing is a cornerstone of his doctrine, because it already indicates true devotion to Mary as “the most wonderful of secrets” and as the simplest and most direct way “to acquire Divine Wisdom”. This consists precisely in total belonging to Christ, a necessary haven in which to develop all the powers of the soul.

He went on a pilgrimage on the advice of Pope Clement XI, who appointed him apostolic missionary and said to him: “In your various missions, firmly teach the doctrine to the people and to the children and get them to solemnly renew their baptismal vows”. The saint conducted his missions above all in his native Brittany and the Vendée, where he made huge efforts in the teaching of the Catechism and in great public manifestations of worship, which often culminated in the raising of a cross. He also promoted reproductions of Calvary, such as the monumental one at Pontchâteau, which was completed after 15 months of work by hundreds of people from all over France and abroad, before his enemies convinced King Louis XIV to have it destroyed under the pretext of national security. It would be rebuilt twice, the last time after the devastation of the French revolutionaries.

Montfort's apostolate proved fundamental at a time when Catholicism was under attack in France by various Jansenists and Protestants, deists and rationalists. He confronted all the enemies of the Church with charity and vigour, transmitting to the people the truths of faith, also through popular songs he composed to inflame hearts even more with the love of God. And in all this his Mariology, clearly Christocentric, was decisive: “It is therefore certain,” he writes in the Treatise, “that the knowledge of Jesus Christ and the coming of His kingdom in the world will be no other than the necessary consequence of the knowledge of the Blessed Virgin and the coming of the reign of Mary, who gave birth to Him the first time and who will make Him shine the second”.

Read more: The Love of Eternal Wisdom, Treatise on True Devotion to the Blessed Virgin, The Secret of Mary, The Admirable Secret of the Holy Rosary