The martyrdom of Saint Leonidas of Alexandria (†202), father of the philosopher and theologian Origen, took place during the persecutions ordered by Emperor Septimius Severus. 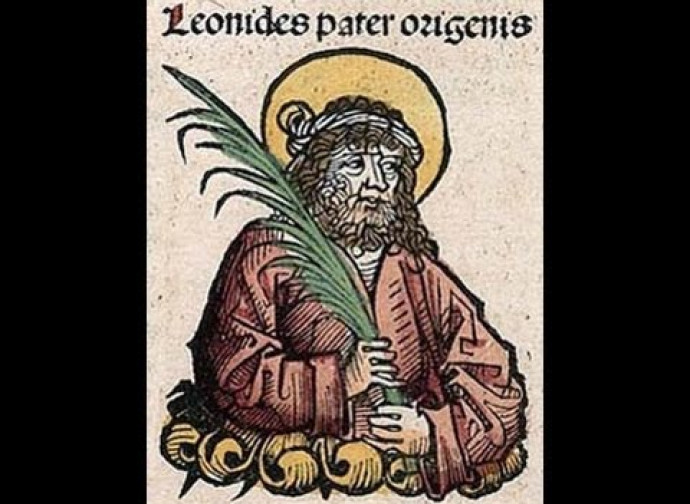 The martyrdom of Saint Leonidas of Alexandria (†202), father of the philosopher and theologian Origen, took place during the persecutions ordered by Emperor Septimius Severus. In his Ecclesiastical History, Eusebius of Caesarea (c. 265-340) reports that Origen was initiated by his father into the study of the Holy Scriptures even before the study of Greek disciplines. Observing that his son was growing up showing great interest in sacred history, Leonidas rejoiced, thanked God and – when the child slept – used to kiss his chest, considering it the temple of the Holy Spirit. Severus’ persecutions proved particularly severe in Alexandria, where Leonidas was captured while Laetus was governor.

When he heard that his father had been imprisoned, Origen became eager for martyrdom, but his mother went so far as to hide his clothes to prevent him from leaving the house and being captured. At that point the boy, the first of seven brothers, and seventeen years old at the time, wrote a letter to his father urging him to persevere in the faith, regardless of earthly ties: “Beware of changing your mind for us”. Leonidas remained firm in Christ and was beheaded around 202. His property was seized by the imperial authorities. So Origen, helped by a wealthy lady, had to work hard to provide for his family. The theological work of the son of Saint Leonidas will long have a significant influence, despite some serious doctrinal errors later condemned by the Church.