The first philosopher to be proclaimed a saint lived his entire youth in a continuous search for truth. He moved from one philosophical school to another until his conversion to Christ, to which he gave witness tirelessly from then on, first with his teaching and then with his martyrdom. 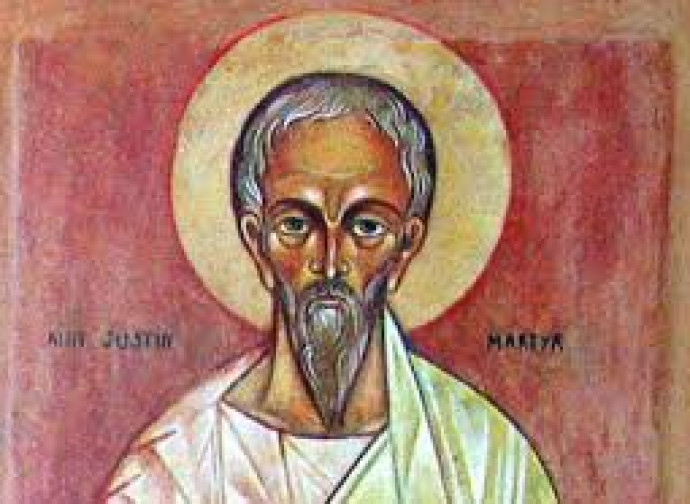 Saint Justin (c. 100-165), the first philosopher to be proclaimed a saint, lived his entire youth in a continuous search for truth. He moved from one philosophical school to another until his conversion to Christ, to which he gave witness tirelessly from then on, first with his teaching and then with his martyrdom. Benedict XVI has described him as "the most important apologist of the second century", because he distinguished himself as a defender of Christian doctrine against the accusations of the pagans and the Jews, who in different ways opposed it.

Justin was born in Flavia Neapolis (present day Nablus), near ancient Sichem in Samaria. He received a pagan education. His thirst for truth led him to study the philosophy of the Stoics, the Aristotelians, and the Pythagoreans, but he never found what he was looking for, which was the way to God. He thought he had finished his search by delving into Plato’s thought, which made him cultivate the idea that he could “attain the immediate vision of God”.

Deluding himself that he could know the Creator solely by his own efforts, he withdrew to an isolated place. Here, as he wrote in his Dialogue with Trypho, he came across an old man who urged him on with his questions and asked him what his idea of God was: “That which is always equal to itself and which is the cause of existence for all other realities, that is God”, Justin replied. The mysterious old man seemed to rejoice at this answer, but he continued to press him, until he recognised that philosophers, without the help of the Holy Spirit, cannot develop a correct thought about God without having seen or heard Him. He then instructed Justin to read the Prophets, “who spoke moved by the divine Spirit” and had proclaimed Christ. The elder took his leave of Justin with the exhortation to pray as a means of arriving at the truth: “Pray first of all that the gates of light may be opened to you, for no one can see and understand unless God and his Christ grant him understanding”.

This experience was the pivotal point of his life. Justin’s soul, docile to these holy counsels, was inflamed with love for Christ. Thanks to prayer and reading the Bible, his conversion developed. Around 130, when he was about thirty years old, he was baptised in Ephesus. The example of the Christians in the face of persecution was another decisive element in his journey of faith: “For I myself, who thought myself satisfied with the teachings of Plato, hearing that the Christians were accused but seeing them fearless before death and all the torments considered terrible, convinced myself that it was impossible that they were living in vice and lust”. He travelled through many cities to share the joy he had discovered and founded a school in Rome, where he taught the truths of the faith.

In his First Apology for the Christians, which he addressed primarily to the Emperor Antoninus Pius, he criticised paganism and its myths, which he described as ‘decoys’ on the road to truth. He pointed out the injustices committed in the courts, where the mere fact of being Christian became grounds for condemnation.

Justin had the great merit of initiating reflection on the perfect conciliation between faith and reason. And, as St John Paul II wrote, he was a “pioneer of a positive encounter with philosophical thought, albeit under the banner of cautious discernment”, because he maintained his esteem for the seeds of truth in Greek philosophy but saw Christianity as “the only sure and fruitful philosophy”. His is also the oldest testimony that has come down to us on the course of the Eucharistic celebration. He said of the consecrated bread and wine: “This food is called by us the Eucharist, and no one is permitted to partake of it except those who believe that our teachings are true, who have been purified by the washing for the remission of sins and regeneration, and who live as Christ taught” (Apologia 1, 66, cited in the Catechism of the Catholic Church, 1355). Refusing to sacrifice to idols, he was condemned to death by the prefect Junius Rusticus during the reign of Marcus Aurelius. He was beheaded with six other disciples (Chariton, Caritus, Evelpistus, Hierace, Peon and Liberian), all of whom were happy to die for faith in the risen Christ.