From Spain his cult has spread almost everywhere. Therefore today there are many places where St. Isidore the Farmer (c. 1082 - c. 1172), Isidro Labrador in Spanish, is invoked as patron saint of farmers and crops. 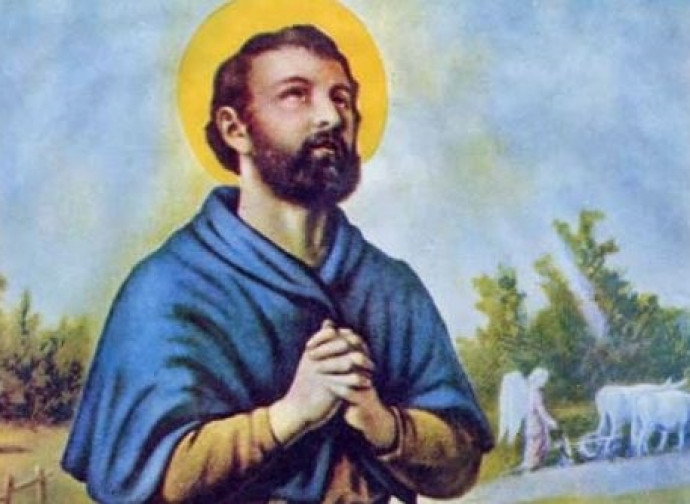 From Spain his cult has spread almost everywhere. Therefore today there are many places where St. Isidore the Farmer (c. 1082 - c. 1172), Isidro Labrador in Spanish, is invoked as patron saint of farmers and crops. Several Hispanic authors have written about the humble figure of Isidore, dedicated to the life of the fields and before that to the worship of his Creator. Among them is the famous playwright Lope de Vega, who dedicated a hagiographic poem to him in 1599, after having carefully documented his life. Lope de Vega had access to the documents for Isidore’s cause of beatification, then in progress. The saint enjoyed centuries of veneration and a reputation for miracles attested from at least 1212, when his uncorrupted body was transferred to Saint Andrew’s Church in Madrid (today he rests in the Collegiate Church of Saint Isidore).

Isidore was born in Madrid to a family of peasants around 1082, when the Castilian city was still under Islamic rule. It was finally freed only eighty years later, in one of the hottest phases of the Reconquista. Isidore presumably worked as a farmworker on the property of don Juan de Vargas, a knight. Isidore was known because every day, before starting work in the fields, he went to the morning Mass and was usually reprimanded for being late. Some farmers in the service of the same master accused him of being a bad worker and of giving to the poor goods that did not belong to him. But the Vargas family could see that the saint did not spare himself any effort and his harvest was always the most abundant.

Because of the constant state of war he had to move for some time to Torrelaguna, where he married Maria Toribia, also known as Maria de la Cabeza, beatified in 1697 and also a farmworker. The two had a son, who one day fell into a well but was saved thanks to his father's faith: Isidore's fervent prayer raised the water level and allowed him to recover the child. Among the other miracles attributed to him - initially passed down orally and then collected in the Code of Saint Isidore (composed around 1275) - there is that of oxen led by angels, while the saint was gathered in prayer.

After the discovery of America, devotion to Isidore spread to the New World thanks to the peasants who emigrated there from Spain. Here, meanwhile, starting from Isabella the Catholic, wife of Ferdinand II (the sovereign under whom the Reconquista was completed in 1492), the use of invoking his intercession every time a queen fell ill had taken root. Isidore was canonized by Gregory XV, who proclaimed him saint in 1622 together with four towering figures in the history of the Church: Francis Xavier, Ignatius of Loyola, Teresa of Avila and Philip Neri. Different charisms, but always with an endless trust in Providence. He, the farmer, reached the heights of holiness precisely by trusting in Jesus' invitation to give precedence to the needs of the soul over those of the body: “Seek first the kingdom of God and his righteousness, and all these things will be given you in addition” (Mt 6:25-34).