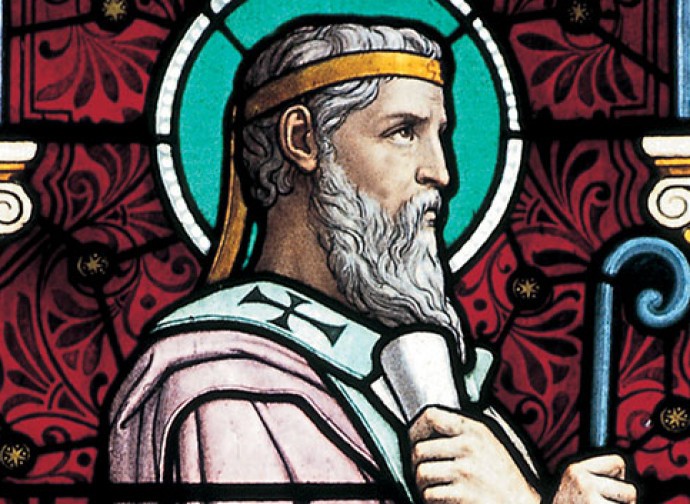 Saint Irenaeus of Lyons (c. 130-202), a disciple of Saint Polycarp, in turn a disciple of Saint John the Evangelist, was the first theologian who lived after the apostolic age to compile an organic synthesis of Christianity. He bequeathed a very rich doctrine, ranging from the pre-eminence of the Church of Rome to the role of Mary as the new Eve.

He was originally from Izmir, in Asia Minor, like the master Polycarp, of whom Irenaeus always kept a very vivid memory, as emerges from a letter full of charity addressed to an old friend who had become a heretic. It expresses well the importance of sacred Tradition (from the Latin tradere “to transmit”) in the custody of the truth: “I could tell you the place where Blessed Polycarp used to sit and talk to us [...], the speeches he made to the people, how he reported his relations with John and with the others who had seen the Lord, how he remembered their words and what things he had heard from them about the Lord, his miracles and his teaching”.

We do not know the exact year Irenaeus moved to Gaul, but it is known that in 177 he was enrolled in the college of presbyters in Lyons. In the same year the early Christian community in Lyons, calling him “zealot of the will of Christ”, sent him on a mission to Rome to face the problem of the Montanist heresy with Pope Eleutherius. On his return to Lyons he was elected bishop of the city because in the meantime the ninety-year-old Saint Pothinus (†177), founder of the diocese, had died of ill-treatment in prison, and with him another 47 martyrs had ascended to heaven, killed under Marcus Aurelius. Irenaeus, who also became a martyr around 202 (under Septimius Severus), had to work to rebuild a community cut down by persecution and to transmit the true faith. He condensed his theological investigation in the five books Against Heresies and in the Exposition of Apostolic Doctrine, which has been called the oldest “catechism of Christian doctrine”.

First of all he had to refute the errors of the Gnostics, who despised the simple faith of the Church and taught that salvation was attainable only through a knowledge revealed to a few initiates, therefore elitist, intellectualistic and leading to many contradictory 'truths'. To the arrogance of Gnosis, Irenaeus replied that the truth is unique, public and accessible to all, transmitted by the successors of the Apostles, the bishops, under the guidance of the Holy Spirit.

Exposing the principle of apostolic succession, essential for the transmission of the true faith, he taught: “The tradition of the Apostles, manifest throughout the world, is shown in every Church to all who wish to see the truth, and we can enumerate the bishops established by the Apostles in the Churches and their successors down to us”. The Bishop of Lyons then explained that the Church “highest and ancient and known to all”, that is, the Church “founded in Rome by the most glorious Apostles Peter and Paul”, is the foundation established by God to confirm His children in the one faith: “In this Church, because of its peculiar pre-eminence, it is necessary that every Church, that is, the faithful everywhere scattered, should come together, because in it the tradition of the Apostles has always been preserved”.

His profound Marian doctrine deserves at least a mention: it always unites the Mother to the work of her Redeemer Son, and is an important basis for the possible definition of the dogma of Mary Co-Redemptrix. In fact, Irenaeus, quoted not by chance in Chapter VIII of Lumen Gentium, recognized Mary's very special role in the history of salvation. And, on the basis of the Pauline teaching of Christ as the new Adam, he wrote: “The knot of Eve's disobedience had its solution with Mary's obedience; what the virgin Eve had tied with her disbelief, the Virgin Mary had untied with her faith”. For this reason he attributed to Our Lady the title of “advocate”, which over the centuries would become very dear to the faithful.