“The Christian is not the result of persuasion, but of power. When he is hated by the world, he is beloved of God”. wrote St Ignatius of Antioch (c. 35-107), converted by St John the Evangelist and second successor of St Peter at the head of the Antiochian Church. 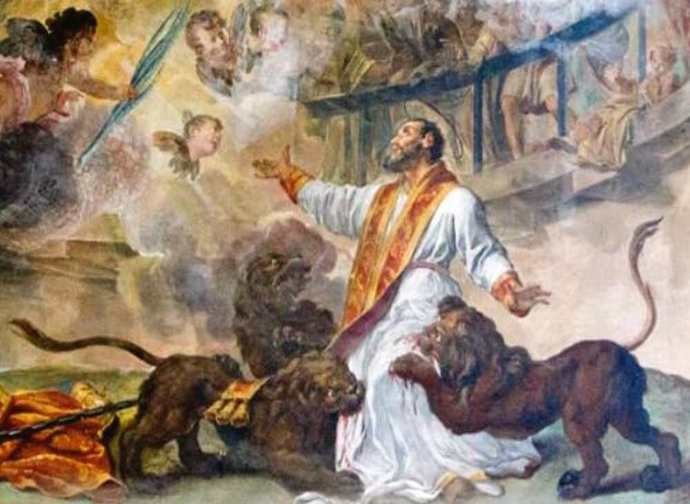 “The Christian is not the result of persuasion, but of power. When he is hated by the world, he is beloved of God”. wrote St Ignatius of Antioch (c. 35-107), converted by St John the Evangelist and second successor of St Peter at the head of the Antiochian Church. The conversion had matured in him such an ardent love for Christ that he joyfully welcomed martyrdom as a means of imitating His Passion. In fact, he was aware of the salvific value of the profession of faith and of suffering offered to God, because “if I suffer, I will be joined in Jesus Christ and will rise free in Him”.

On his deportation journey from Antioch to Rome, where he was mauled to death by beasts during Trajan's persecutions, he wrote seven letters. In them the terms “Christianity” and “Catholic Church” appear for the first time, together with an extraordinary awareness of the ecclesial mission. These are letters addressed to the Churches of Ephesus, Philadelphia, Magnesia, Smyrna, Tralles, Rome and a personal one to his friend and bishop St Polycarp, which are part of the body of sub-Apostolic writings (i.e. by the successors of the apostles). These missives well demonstrate the faith that animated the first Christian communities and the contrast between their testimony of life and the pagan one. “Consider those who have a different opinion about the grace of Jesus Christ who came to us, how contrary they are to God's plan. They do not care about charity, nor about the widow, nor about the orphan, nor about the oppressed, nor about those who are prisoners or free, nor about those who are hungry or thirsty”.

He liked to call himself “Theophorus”, while he called “Necrophorus” any heretic such as a Docetist who denied Christ's human nature and His real sufferings on the Cross. He reminded them that not only was the Son of God nailed in the flesh but He also rose again in the flesh, showing Himself to the apostles who “immediately touched Him and believed, at the contact of His flesh and blood. For this reason they despised death and were superior to it”. And for this reason - like the apostles - he accepted martyrdom, to the point that in his epistle to the Christians of Rome he begged them not to do anything to prevent it, but only to ask for his inner and outer strength “so that I might not only speak, but truly will, so that I may not merely be called a Christian, but really prove to be one”.

His letters are also noteworthy because for the first time they presented the tripartite conception of the Catholic ministry, organised in deacons, priests and bishops, which he exhorted to follow in fidelity to the Divine Law and the Apostolic Tradition. “Where the bishop appears, there is the community, and where Jesus Christ is, there is the Catholic Church”.

The Seven Epistles of St Ignatius of Antioch