The patron saint of the city and diocese of Aosta, Saint Gratus (5th century), was the second bishop of the capital city of the Valle d’Aosta. He succeeded Eustasius, with whom he probably shared a Greek origin. 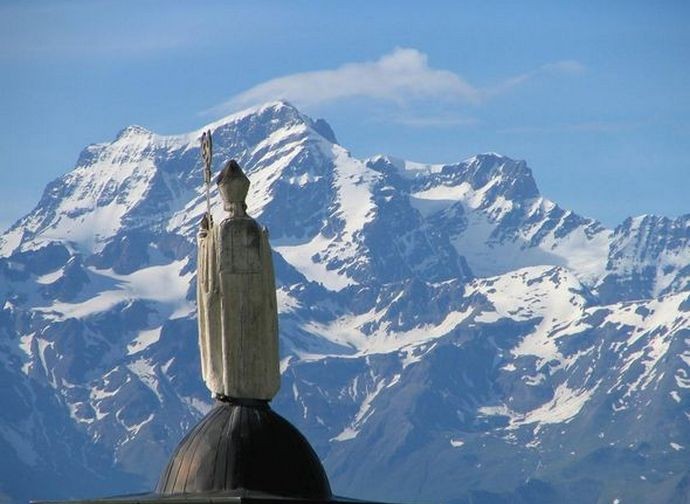 The patron saint of the city and diocese of Aosta, Saint Gratus (5th century), was the second bishop of the capital city of the Valle d’Aosta. He succeeded Eustasius, with whom he probably shared a Greek origin. It is believed that Gratus, like his predecessor, also received his training in the priestly community founded in the 4th century by Saint Eusebius of Vercelli, whose diocese originally included the territory of Aosta, the Roman Augusta Praetoria.

We find Gratus’ signature on a letter sent to St Leo the Great at the conclusion of a synod held in 451 in Milan, where the saint - then a simple priest - had gone to represent his bishop Eustasius. It was the same year of the Council of Chalcedon, when Pope Leo's dogmatic epistle was read (the Tomus ad Flavianum, named after the Patriarch of Constantinople Saint Flavian, to whom the letter had been addressed two years earlier, in support of his orthodoxy). It condemned the Monophysite heresy and solemnly reaffirmed the doctrine of the Incarnation and the coexistence of the two natures, human and divine, in the one person of Jesus Christ.

On the death of Eustasius, Gratus succeeded him in the leadership of the diocese. We do not know the exact year when he went to Heaven, but from an epigraph we know that his burial took place on 7 September. His remains are today kept in the Aosta Cathedral in a Gothic style reliquary.

One of his most common iconographic attributes is the head of St John the Baptist because according to a 13th century legend, which is not generally reliable from a historical point of view (the author places his life at the time of Charlemagne, therefore three centuries later than the data regarding the holy bishop), Gratus found in the Holy Land the severed head of the Precursor. What we do know, however, from previous stories, is that the head of John was brought to Italy by Greek monks. In Valle d'Aosta and in the nearby territories, Gratus enjoys great popularity and is particularly invoked for the protection of crops.