While Constantius II used every means to impose Aryan heresy throughout the Roman Empire, Saint Eusebius of Vercelli (end of the 3rd century - 371) was one of the few bishops to defend strenuously, at the cost of persecution, the righteous faith in the Son of God “begotten, not created, of the same substance as the Father”, as had been solemnly confirmed by the Nicene Creed. 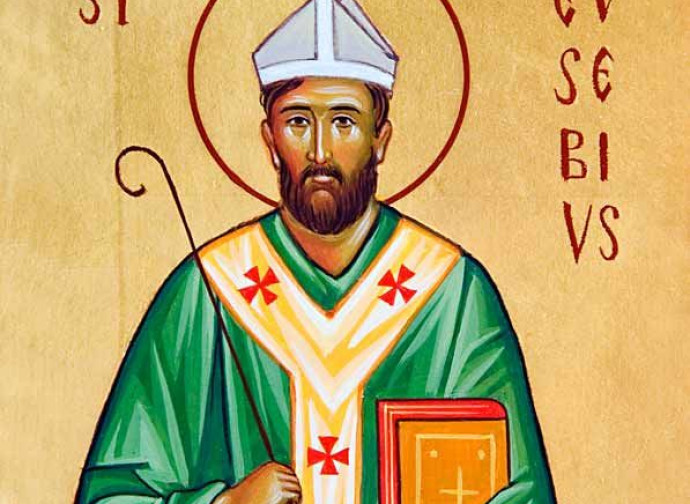 While Constantius II used every means to impose Aryan heresy throughout the Roman Empire, Saint Eusebius of Vercelli (end of the 3rd century - 371) was one of the few bishops to defend strenuously, at the cost of persecution, the righteous faith in the Son of God “begotten, not created, of the same substance as the Father”, as had been solemnly confirmed by the Nicene Creed.

Originally from Sardinia, when he was a child he moved with his family to Rome, where he was ordained priest. Eusebius earned the admiration of the Christian community of Rome, which for about three years became the refuge of the exiled Athanasius of Alexandria. In 345 Saint Julius I consecrated him bishop of Vercelli, the first such position of which we have verification. Thanks to his work of evangelization he became the patron saint of the whole region of Piedmont, at the time still largely pagan, especially in the countryside.

One of the most relevant facts of his episcopate was the foundation of a priestly community that led a common life, following the example of the monks gathered in the cenobia. For this community, which became a powerhouse of saints, he earned a post-mortem eulogy from Saint Ambrose. The bishop of Milan, in a letter to the faithful of Vercelli (written around 394), expressed all his esteem for Eusebius who had governed his diocese “with the austerity of fasting” and educated the clergy to “observe the monastic rules, even though he lived in the middle of the city”.

Eusebius was therefore a true light in the Church of the 4th century. A shining testimony of his holiness was given at the Council of Milan in 355, when true faith in Christ was in danger of disappearing. The Council had been summoned by the emperor, who had long persecuted Saint Athanasius (“pillar of the Church”) and two years earlier had exiled Saint Paulinus of Trier, also faithful to Catholic orthodoxy.

Constantius II aimed to obtain the signature of some Aryan declarations and another condemnation of Athanasius by the whole Council assembly, initially gathered at the Basilica Maior (where the Cathedral stands today). But the arrival of Eusebius, with his charisma, complicated his plans. The saint asked to cancel Athanasius' condemnation and urged the bishops to sign the profession of faith in the Creed of Nicaea, clearly meeting the opposition of the Arians. In the end the emperor intervened personally, having the council moved to his palace and imposed the reconfirmation of the sentence against Athanasius: Eusebius was one of the three bishops, together with Lucifer of Cagliari and Dionysius of Milan, who refused to sign. And all three were exiled (a year later, at another pseudo-Council, the same fate would befall Saint Hilary of Poitiers).

Eusebius spent seven years in exile, five of them in Scyithopolis (in the Holy Land) and the rest between Cappadocia and Thebaid. He suffered mistreatment but continued, as a true shepherd, to worry about his distant flock. “I beg you to guard the faith with great vigilance, to keep harmony, to pray frequently and to remember us so that the Lord may deign to free his Church which suffers all over the earth”, he wrote in one of the three letters from exile which have come down to us. He was able to return to Vercelli in 362, a few months after the death of Constantius II († 3 November 361). As Saint Jerome, who also included him in his De Viris Illustribus, wrote: “when Eusebius returned, Italy stopped mourning”. According to tradition, it was he who, on his return from the East, brought figurines depicting the Black Madonna; and the first origin of the Marian sanctuaries of Oropa and Crea, which proved to be decisive for the conversion of the rural populations to Christ, can also be traced back to him.