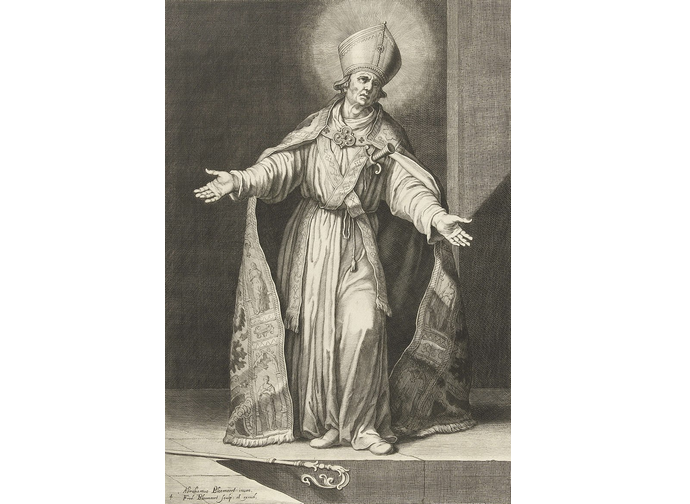 Saint Frederick of Utrecht (c. 781 - Walcheren 838) was presumably born in Friesland, into a noble family. He was in fact a grandson of the Frisian King Radboud. He was ordained a priest and entrusted with the education of catechumens. Thanks to his recognized virtues, at the death of Bishop Ricfried he was chosen to succeed him at the head of the diocese of Utrecht. In his episcopal ministry he undertook to combat incestuous marriages and to continue the evangelization of the Frisians. To this latter mission he entrusted Saint Odulfus, who later became his biographer. Frederick himself went to preach on the island of Walcheren in Zealand. He corresponded with the Benedictine monk and scholar Rabanus Maurus (also a saint), who dedicated his commentary on the Book of Joshua to him.

He lived his mature years during the empire of Ludwig the Pious and the civil wars that broke out between the heirs from his first marriage (Lothair, Pepin of Aquitaine, Ludwig the Germanic) and Charles the Bald, son of the emperor's second wife, Judith of Bavaria. The latter took steps to ensure that Charles was included in the division of territories.

The circumstances of St. Frederick's death are not clear. According to one version, he was murdered by the hired assassins of the empress Judith while celebrating Mass, since it seems that the bishop had condemned her dissolute life. According to another version, more accredited and supported among others by the cardinal and historian Caesar Baronius, the instigators of Frederick's murder were the pagans of Walcheren who could not stand his evangelizing mission.

What is certain is that he was soon venerated as a martyr. He is invoked against deafness, along with the more famous Saint Francis de Sales.