The life of the Calabrian mystic and founder of the Order of Minims, called “the other Francis” for his charity, was marked by the gift of faith from his conception. His parents named him Francis in honour of St. Francis of Assisi, whom they invoked to receive the grace of having a child, who finally came to them after about 15 years of marriage. 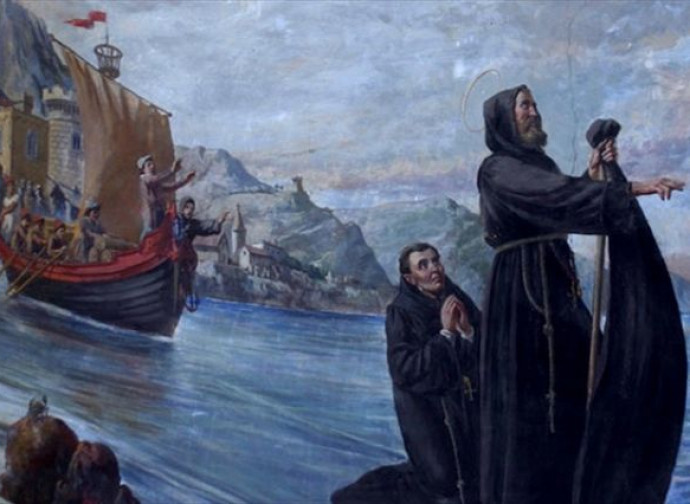 The life of the Calabrian mystic and founder of the Order of Minims, called “the other Francis” for his charity, was marked by the gift of faith from his conception. His parents named him Francis in honour of St. Francis of Assisi, whom they invoked to receive the grace of having a child, who finally came to them after about 15 years of marriage. They thanked Heaven, but probably never imagined that this child would become known in history as Saint Francis of Paola (1416-1507). Years later they also had a little girl, whom they called Bridget. But in the meantime they had to ask again for the intercession of the Saint of Assisi because their son, one month after birth, had contracted a serious infection that put his left eye at risk. The parents prayed for his recovery, vowing to send him to the Franciscans for a whole year. The illness passed.

Francis soon manifested his inclination to religious life, growing up in a spirit of humility and prayerfulness. At the age of 13 he had a vision of a Franciscan friar who asked him to fulfil the vow made by his parents: he entered the convent, where he remained for a year living in perfect obedience to the Franciscan rule. The friars would have liked him to stay, but he wanted to deepen his vocation before choosing how to consecrate himself to God. To this end he went on pilgrimage to Rome, Montecassino, Loreto and Assisi. On his return to his city, he went to live as a hermit in an inaccessible place, practising fasting and penance, arousing the amazement of the inhabitants of Paola, some of whom joined him in 1435. It was the beginning of the community that would become the Order of the Minims, whose symbol is a luminous shield with the word Charitas in the centre.

Francis became a point of reference for the poor and all the faithful of his land. Under his guidance other hermitages in Calabria and Sicily were created. It is in this phase that one of the most famous miracles attributed to him occurred. Having to cross the Strait of Messina with two confreres and not having the necessary money, he asked the boatman Pietro Colosa to ferry him “for the love of God”. The boatman replied that he was working “for the love of money”. The saint kept his calm, tied his cloak to his stick, laid it on the sea and crossed the Strait. This episode would be substantiated including by the revelations of Jesus to the most humble blessed Edvige Carboni (1880-1952). In her diary she reported this advice given to her by the Lord: “In this month of April dedicate devotion to a saint very dear to me: St. Francis of Paola. That Saint loved Me so much. He did not journey by sea in a boat, but his boat was his stick”.

Francis warned the rulers and predicted the fall of Otranto into the hands of the Turks, which caused the martyrdom of 813 Christians. He prophesied to Ferdinand II of Aragon his victory over the Muslims in Spain, which did indeed take place, as he was the king who completed the Reconquista.

His fame as a healer spread to France and led King Louis XI, who was seriously ill, to beg for a visit. The saint was reluctant to leave his homeland, but eventually did so in obedience to Pope Sixtus IV, to whom the sovereign had appealed. He arrived in France in 1483, exhorting the king to accept the illness and think about the salvation of his soul. He was successful. During his stay in France, where he stayed due to pressure from the various successors of Louis XI, he improved relations between the papacy and France. Here too, many followed his example and the Order of the Minims progressively adopted a cenobitic way of life. Francis himself wrote the rule, providing for the profession of a fourth vow, that is, the observance of a perfect and perpetual Lenten life. He died at Plessis-lez-Tours on Good Friday 1507, while, on his request, his confreres read him the account of the Passion according to John. He was canonized just 12 years later by Leo X, to whom he had predicted his election as pontiff when Leo was still a child.

Patron of: Calabria, sailors, seafarers and fishermen; invoked against fires, sterility and epidemics.