The saint remembered as a devout mother and bride, adorned with extraordinary graces, invoked for the liberation of souls in Purgatory, beloved by the people for her moving charity, did not want marriage, but marriage became her way to holiness. 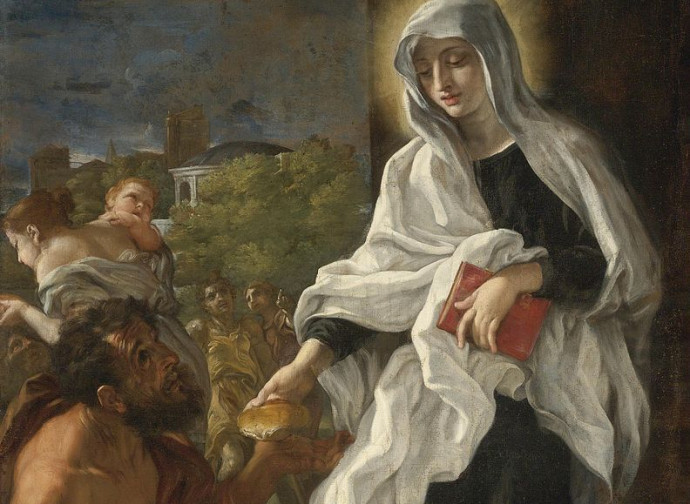 The saint remembered as a devout mother and bride, adorned with extraordinary graces, invoked for the liberation of souls in Purgatory, beloved by the people for her moving charity, did not want marriage, but marriage became her way to holiness. How? By accepting God's holy and inscrutable designs.

Saint Frances of Rome (1384-1440) was born into a noble family close to Piazza Navona and lived all her life in Rome, at that time riven by the Western Schism (which only ended in 1417), which tore the Church apart for forty years and undermined the Pope's authority. At that time the city was exposed to frequent looting, and extreme poverty was rampant. Frances, who accompanied her mother on visits to the churches, grew up with a strong Faith and soon developed a vocation to monastic life. But she had to renounce this because, when she was only twelve years old, her father promised her in marriage to the nobleman Lorenzo de' Ponziani.

Frances was devastated by her father’s decision and wept in front of her first spiritual director because she could not fulfil her desire to become bride of Christ. The priest listened and then said to her, “Are you crying because you want to do God's will or because you want Him to do yours?”. Francesca was married, but found her early life in the palace of the Ponziani very trying: she developed anorexia and was close to death. On July 16, 1398 Saint Alexius appeared to her in a dream: “You must live. The Lord wants you to live to glorify His name”. When she woke up Francesca prayed, thanked the saint and said: “God's will is mine”. She embraced her cross, and Providence supported her again by allowing her to discover the precious friendship of her sister-in-law Vannozza, with whom she shared the intention of following the will of God.

Frances and Vannozza began to pray and attend Mass together, dedicating their free time to visiting the sick and prisoners. The married life that Francesca had accepted out of obedience became the first source of her joy and spiritual elevation. Fortitude and piety grew stronger after each bereavement. At the age of 16 she gave birth to the first of her six children, three of whom were taken to Heaven as babies. In 1401, when his wife died, her father-in-law Andreozzo entrusted her with the keys to their pantries and barns, which were emptied in a few months because Frances increased the aid given to the poor. Her father-in-law, who was himself a charitable man (he had already founded the Hospital of the Most Holy Saviour), was astonished to see what his daughter-in-law had done with his goods, but in the end left her the keys, noting a miracle that became known throughout Trastevere: the barns and wine barrels had miraculously filled.

Her husband, a kind man who was semi-paralyzed after being wounded in battle in 1409, granted her permission to sell her clothes and jewels. Francesca walked around Rome in a rough cloth dress, begging for alms for the poor, heedless of the irony of several nobles, who called her “la poverella de' Trastevere” [the poor woman of Trastevere]. During the plague epidemic that struck the city, she opened the palace to the sick: the plague took away two of her young children, Evangelista and Agnes, but she did not stop entrusting herself totally to God. At the end of the epidemic, Evangelista appeared to her in a dream, in the company of an angel whom from then on she always saw at her side. He was her guardian angel, as she confided to her confessor Giovanni Mariotto, to whom she revealed her visions of Purgatory (from which she freed many souls through prayer) and Hell, her struggles with Satan (who particularly hated her), as well as the frequent ecstasies granted her by God.

On August 15th, 1425, with nine women attracted by her example and all from rich Roman families, she constituted the Olivetan Oblates of Mary (today “Oblates of Saint Frances of Rome”), to whom in July 1433 Eugene IV granted the privilege to lead a regular life. On the 15th of March of that same year the nine women had begun to live under the same roof in Tor de' Specchi, where three years later, on the death of her husband whom she had lovingly looked after until the end, they were joined by Frances. The saint returned to the House of the Father on March 9,1440, and for three days the people of Rome, of which she is Co-Patroness with St. Peter and St. Paul, paid homage to her remains. She taught: “Always have only the glory of God as the intent of your activity”.

Patroness of: Rome; motorists, Benedictine oblates, widows; invoked against the plagues and for the liberation of souls in Purgatory.