“The great Ephrem has awakened the numbed souls; comforted the afflicted; formed, directed and exhorted the young; mirror of monks, guide of penitents, sword and arrow against heretics, casket of virtues, temple and resting place of the Holy Spirit.” Thus a great Eastern Father and Doctor of the Church, St. John Chrysostom (†407), wrote about St. Ephrem the Syrian (306-373), the most important of Syriac writers and himself a Doctor of the Church. 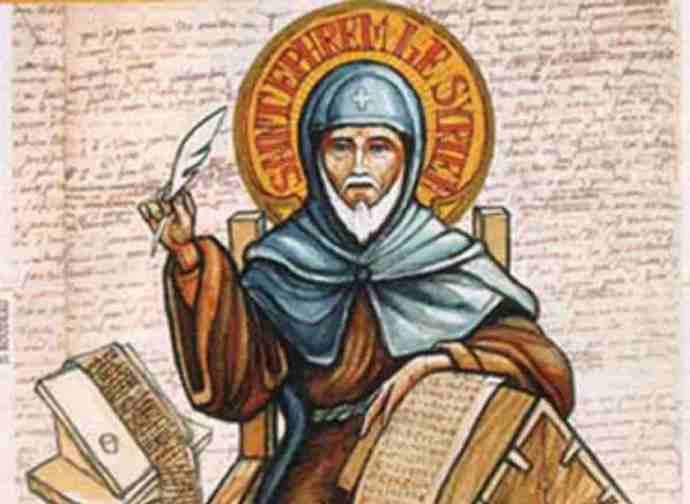 “The great Ephrem has awakened the numbed souls; comforted the afflicted; formed, directed and exhorted the young; mirror of monks, guide of penitents, sword and arrow against heretics, casket of virtues, temple and resting place of the Holy Spirit.” Thus a great Eastern Father and Doctor of the Church, St. John Chrysostom (†407), wrote about St. Ephrem the Syrian (306-373), the most important of Syriac writers and himself a Doctor of the Church.

His uniqueness was that he was able to bring together theology and poetry. In fact, he wrote mainly in verse (three million, according to the ancients), while not disdaining prose. For the inspiration and musicality of his writings, he was called “Harp of the Holy Spirit”. St. Jerome (†419/420) included Ephrem, a deacon, in De viris illustribus and reported that “in certain churches, after reading the Bible, his works were read publicly”.

Originally from Nisibis in Mesopotamia (modern Nusaybin, Turkey, on the border with Syria), Ephrem was born into a Christian family. It was a time when the memory of Diocletian's persecutions (during which Saint Febronia had suffered martyrdom in Nisibis), was very much alive. Ephrem's own parents “had confessed Christ in court”, as we read in the Confessio attributed to the saint.

In his Christian formation the wise guidance of St. James of Nisibis (†338), long-standing bishop of the city and among the 318 Fathers of the Council of Nicaea, was of great importance. It is not clear whether they founded the famous exegetical school of Nisibis together, or whether the origin should be attributed to only one of them. It is certain, however, that over the years Ephrem became the most authoritative exponent of that school, so much so that he earned the nickname “Doctor of the Syrians”. After repeated attempts by the Persians to conquer Nisibis, the city was ceded to Sapor II in 363. Ephrem then emigrated to Edessa, where he continued his life as an ascetic and preacher of the true faith. Already an old man, during the severe famine that struck the city, he personally organized collections for the needy, fed them, and had beds made under the arcades of Edessa, bringing bodily and spiritual comfort.

His immense production includes biblical commentaries, polemical writings, homilies in verse, and especially hymns. Not only did he expound the truths of faith in poetic form, but he also had the hymns he composed sung. His metric rhythm was widely propagated among both the Greeks and the Latins, and the invention of antiphonal chant is traced back to him. “Indeed, does it seem probable that the liturgical antiphonary, with its songs and processions, introduced at Constantinople in the works of  Chrysostom and at Milan by Ambrose (whence it spread throughout Italy), was the work of some other author?”, one reads in Principi Apostolorum Petro (1920), the encyclical with which Benedict XV proclaimed Saint Ephrem Doctor of the Church.

Ephrem used sacred music and poetry for catechesis. And, thanks to his mastery, he succeeded in admirably countering the heretics, who at least since the 2nd century had used those same means to propagate their errors. “Theology, reflection on faith, poetry, song, praise of God go together; and it is precisely in this liturgical character that divine truth appears with clarity in Ephrem's theology”, Benedict XVI said in a catechesis on the saint (general audience of 28 November 2007)

Ephrem used splendid images to transmit the greatness of the Eucharistic mystery. His work was particularly rich and inspired when it came to singing the praises of Mary, exalted by him in her divine motherhood and as “our mediatrix” to her Son. He knew by tradition, or intuited, what other saints and mystics have confirmed and that is that “Mary, as she was present at the first miracle, so had the first fruits of the resurrection from the underworld”, seeing the Risen Jesus first.

Learn more: Harp of the Holy Spirit: The Life of Saint Ephrem the Syrian Short video