The stigmata, the ecstasies, the conversations with God, the bilocations were just some of the countless graces received by Catherine of Siena (1347-1380), co-patroness of Italy and Europe. 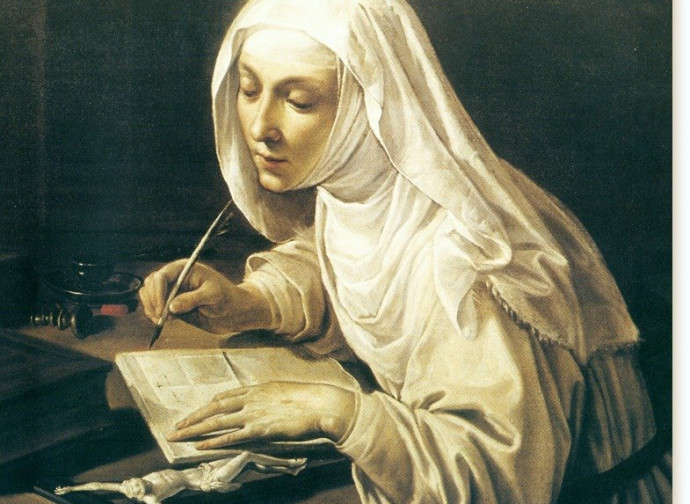 The stigmata, the ecstasies, the conversations with God, the bilocations were just some of the countless graces received by Catherine of Siena (1347-1380), co-patroness of Italy and Europe. And to these graces the saint responded by consuming herself with passion for the Church and for Christ crucified, whom she sometimes invoked in this way: “O mad lover!”. Her 33 years of earthly life, one of the many signs of her total belonging to Jesus, were accompanied by extraordinary mystical gifts since childhood, together with a charity towards the poor and the sick that moved even the hardest of hearts. Twenty-fourth of the 25 children of Lapa and Jacopo Benincasa (a dyer), Catherine had her first important vision when she was only six years old: she saw heaven with Jesus enthroned, crowned with the papal tiara and covered with a red mantle, in the act of blessing her, with Saints Peter, Paul and John the Evangelist at His side.

She was born in the middle of the Avignon Captivity (1309-1377), the long period of crisis of the Church in which the seat of the papacy was established in Avignon, far from where Peter and Paul had suffered martyrdom. That first supernatural experience was like an anticipation of her mission, aimed at bringing back to Rome the pope, whom she called “the sweet Christ on earth”. A few months later she made a vow of virginity, but around the age of 12 her parents attempted to arrange her marriage.

Mindful of the vow and the request made to Our Lady, to whom she had asked for Jesus as her Bridegroom, the saint resisted. She went so far as to cut off her hair and cover her head with a veil. Her father finally decided to give his consent, after seeing her absorbed in prayer while a dove was hovering over her head. At the age of 16, exceptionally, again thanks to Providence, she was able to join the “Mantellate” [cloaked nuns] of the Dominican Third Order (only widows and adult women could join them), so called because they wore a black cloak over a white dress.

At the end of the Carnival of 1367 came the moment so long awaited by Catherine: the mystical wedding with Christ, who put a ring on her finger visible only to her, amid the rejoicing of the Virgin and a host of saints. Three years later the “Beautiful Brigade” began to form, made up of religious and lay men and women, fascinated by the charism of the saint and called “Caterinati”. They would accompany Catherine in her movements and help her in her works of charity towards the sick, lovingly cared for by her, even more so if they were contagious. The more abandoned they were the more she saw in them the face of Christ. In the meantime, the Lord had given her His Heart during an ecstasy at the convent church: “Here Jesus appeared to her surrounded by light, which opened her chest and gave her His Heart, saying, 'Here, my dearest daughter, since I took away your heart the other day, so now I give you Mine for which you always live’.” This description was by her first biographer, Blessed Raymond of Capua, whom the Dominicans had assigned to her as her personal confessor in 1374.

Four years earlier the saint had already begun to write or dictate, thanks to the gift of infused knowledge (which remedied her illiteracy), numerous letters. There are 381 of them, addressed to pontiffs, bishops, rulers and other illustrious personalities of the 14th century. The tone of her letters was very firm, but always dictated by maternal love, for the salvation of souls and the establishment of the Kingdom of Christ on earth: “No State can be preserved in civil law in a state of grace without holy justice”, she admonished. She used to present herself as follows: “I Catherine, servant and slave of the servants of Jesus Christ, write to you in His precious Blood”.

On April 1, 1375 she received the stigmata, which by her explicit request to God remained invisible, appearing only shortly before she died. The following year her ardent counsel was fundamental in overcoming the last fears of Pope Gregory XI (who had received news of serious unrest in Rome) and in convincing him that his return to Rome in January 1377 was the will of God.

When Gregory died, the saint had to suffer another immense ecclesial sorrow: the beginning of the Western Schism (1378-1417), caused by the French cardinals who broke away and elected their own antipope. Now almost unable to walk, she still went every morning to Saint Peter's church: “It seems to me that I must confirm this time with a new martyrdom in the sweetness of my soul, that is in the Holy Church”. In those last years the magnificent Dialogue of Divine Providence was born (which in 1970 earned her the proclamation as Doctor of the Church), where the Eternal Father revealed to her that the Incarnate Son is the bridge between heaven and earth, the fruit of His Mercy: “My Goodness seeing that in no other way could you be drawn to Me, I sent Him to earth [...]. He could not have shown you more love than by giving His life for you. Therefore, by force, man is drawn by Love, provided that in his ignorance he does not resist letting himself be drawn”.

After weeks of mortal agony, she took her last earthly breath at three o'clock in the afternoon, saying sweetly: “Father, into Your hands I commend my soul and my spirit”.