The martyrdom of the young Roman virgin Bibiana (c. 347-362), (more commonly known as Viviana), was perpetrated during the historical interlude of the empire of Flavius Claudius Julianus (361-363), known as the Apostate. 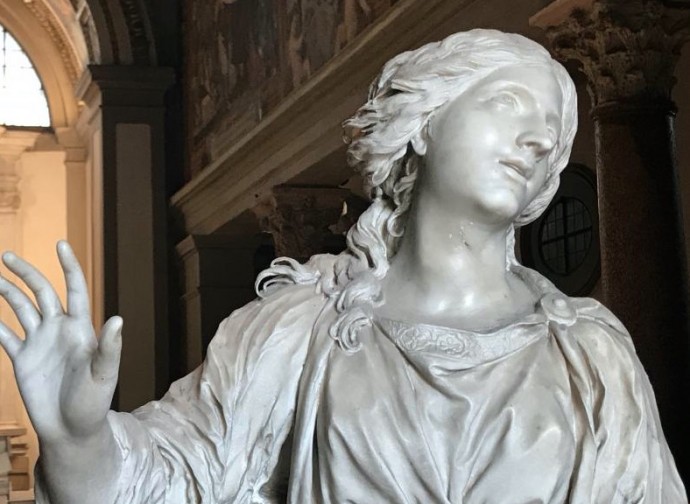 The martyrdom of the young Roman virgin Bibiana (c. 347-362), (more commonly known as Viviana), was perpetrated during the historical interlude of the empire of Flavius Claudius Julianus (361-363), known as the Apostate. The emperor tried to restore paganism after it had been supplanted by Christianity, which had been able to withstand three centuries of persecution and had been consolidated during the time of Constantine.

The oldest evidence of the saint's name is found in the Liber Pontificalis. In tracing the biography of Saint Simplicius (Pope from 468 to 483), this text reports that the Pontiff consecrated four basilicas in Rome to the holy martyr Bibiana. One of them was “near the palatium Licinianum, where her body rests”. That church, restored in the 13th century, still exists and preserves the remains of Bibiana within an ancient alabaster urn (which also contains relics of the martyrs Dafrosa and Demeter), as well as a valuable statue sculpted by Gian Lorenzo Bernini.

The history of her martyrdom is described in the Passio Bibianae, the work of a 7th century author. Bibiana and her family were persecuted by Apronian (appointed prefect of Rome by Julian the Apostate), who superstitiously held Christians responsible for the loss of an eye. The first to suffer martyrdom was the saint's father, Flavian, who was caught burying the bodies of the martyrs Prisco, Priscilliano and Benedetta. He was first exiled and then killed. Shortly afterwards her mother Dafrosa was beheaded. Bibiana's sister, Demeter, died in prison after having endured months of hardship and threats made against her to induce her to abjure her faith in Christ.

Seeing that the imprisonment had not succeeded in weakening Bibiana's firm faith, Apronian changed his strategy. He sent the young Christian girl to a mistress named Rufina who, in vain, offered her a comfortable life of worldly pleasures in order to lead her astray. But the saint again gave proof of her virtues, professing once again her fidelity to God. Blinded by anger at Bibiana’s fortitude, Apronian had her tied to a column and scourged with leaded rods. Thus began an agony that according to tradition lasted four days. Today the Martyrology remembers her in these words: “In Rome, memorial of Saint Bibiana martyr, in whose honour Saint Simplicius Pope named a basilica on the Esquiline”.