He was prior of the monastery of St. Andrew al Celio in Rome, when Pope Gregory the Great entrusted him with the mission of re-evangelizing the ancient Britannia 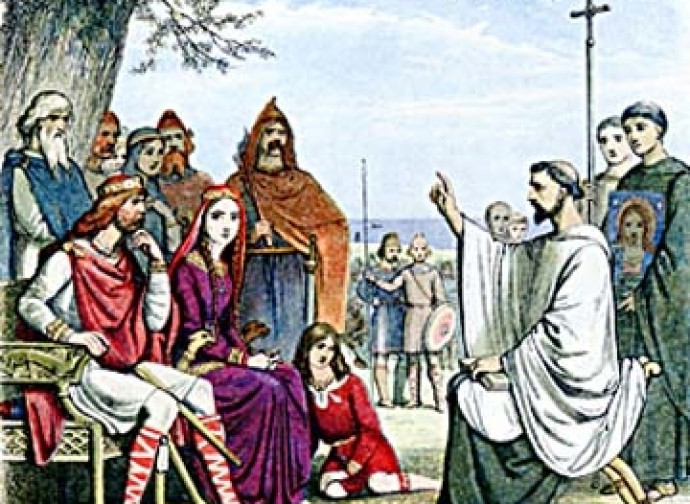 St. Augustine of Canterbury (534-604) was prior of the monastery of St. Andrew al Celio in Rome, when Pope Gregory the Great entrusted him with the mission of re-evangelizing the ancient Britannia. This land, in fact, after the invasion of the Saxons (5th-6th century) had become mainly pagan again.

Gregory put Augustine at the head of about forty monks. On his journey to the English lands the group of Benedictines, crossing Gaul, decided to stop because they were intimidated by the stories about the violent nature of the Saxons. Augustine then returned to Rome to obtain permission to cancel the mission, but Saint Gregory encouraged him not to give up. In the end Augustine and the other 40 missionaries landed on the Isle of Thanet. A few days after their arrival, Ethelbert - king of Kent, raised in paganism but who had gradually become interested in Christianity thanks to his wife (Saint Bertha) - wanted to meet them. Augustine and his monks, as Saint Bede the Venerable reports in his Ecclesiastical History of the English People, presented themselves to the king of Kent with a silver cross “and the image of Our Lord and Saviour painted on a tablet; and intoning litanies, they offered their prayers to the Lord for the eternal salvation of themselves and those to whom they had been sent”.

Ethelbert gave his blessing to the preaching of Augustine and his monks and, within a year, received Baptism. In addition to the sovereign, the first English king to convert to Christianity and to be venerated as a saint himself, thousands of subjects were baptized, about 10,000 according to tradition. Ethelbert himself accompanied Augustine to Canterbury where the Italian saint was able to establish his seat, founding what is today known as St. Augustine's Abbey. Its religious function ceased in 1538, due to the dissolution of the monasteries imposed by Henry VIII as a result of the Anglican Schism.

Thanks to epistolary contact with Pope Gregory, in 601 other missionaries arrived in Britain, above all the Saints Justus and Mellitus. They brought Augustine some relics and the pallium, sent to him as Metropolitan Archbishop. Augustine became in practice the primate of England, the first in history. The saint three years later consecrated Mellitus Bishop of London and Justus Bishop of Rochester. Shortly afterwards, on 26 May 604, when the re-evangelization of those lands, despite the inevitable difficulties, was well underway, Augustine returned to the House of the Father. His body was buried in the church inside the abbey that bears his name.

Ecclesiastical History of the English People, by Saint Bede the Venerable