The five times this man of Providence was forced into exile for his indomitable defence of the true faith, which was threatened by the Arians, shine a light on why Saint Athanasius (c. 295-373) was called “the Great”. 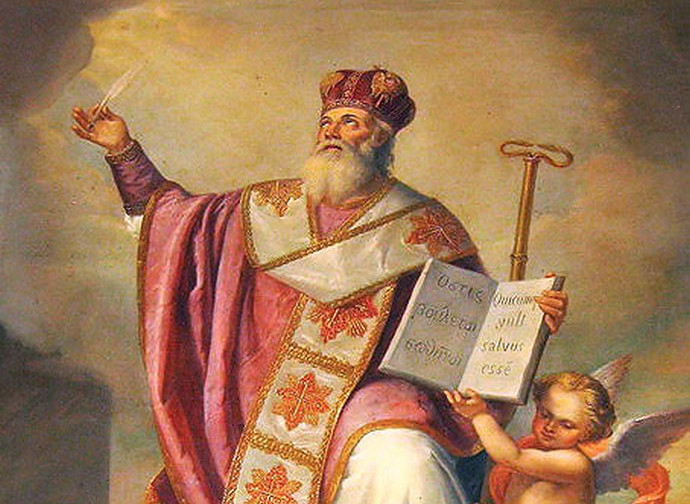 The five times this man of Providence was forced into exile for his indomitable defence of the true faith, which was threatened by the Arians, shine a light on why Saint Athanasius (c. 295-373) was called “the Great”. One cannot even imagine what would have become of the Church and Catholic truth without a man of God like Athanasius, everywhere revered as “the father of orthodoxy”.

He lived in that era of crisis effectively summed up by the famous phrase of Saint Jerome: “And the world, dismayed, found itself Aryan”. The saint, persecuted by heretics and various emperors, was the most combative defender of the divinity of Christ, questioned by the presbyter Arius. He argued heretically that the Son was not coeternal with the Father, reducing him to a mere creature, disregarding the teaching of the Holy Scriptures and the Holy Tradition.

Athanasius was born in Alexandria in Egypt, of Christian parents, and at least three facts can be considered decisive in his formation. First, he was barely a child at the age of the Great Persecution of Diocletian (303-305), which continued with Maximinus Daia: in Alexandria the martyrs were countless and certainly their witness of faith in Christ must have deeply affected him. Secondly, in those years he made friends with Saint Anthony Abbot (c. 251-356), who came to the city to comfort the persecuted Christians. The death of the great Father of the desert came decades later and it was Athanasius himself who wrote the exemplary Life of Anthony, which immediately became very popular and helped to spread the monastic ideal in both East and West. Thirdly, he matured under the guidance of Bishop Saint Alexander, who devoted himself to informing all about Christianity and opposing Arius, whose heresy had its source of propagation in Alexandria itself.

Alexander wanted Athanasius as his spokesman at the Council of Nicaea in 325. At Nicaea, Arianism was condemned and the Council Fathers approved the Symbol, which dogmatically defined the consubstantiality between Father and Son: they are of the same substance. Following the death of the master, Athanasius succeeded him to the patriarchal See of Alexandria: it was 328, the beginning of his 45 years as bishop, 17 of which he spent in forced exile, always heroically defending the true doctrine. The Arians in fact continued undaunted to profess their errors and convinced Constantine - influenced by Eusebius of Nicomedia - to depose Athanasius, who was severely slandered and pretentiously accused of being an impediment to peace. It was the saint’s first exile, which he spent in Treves. The famous treatise on the Incarnation of the Word dates back to this period, in which he wrote that the Son “became man so that we might become God; He made Himself visible in the body so that we might have an idea of the invisible Father, and He Himself endured the violence of men so that we might inherit incorruptibility”.

He spent his second exile in Rome, after about ninety Eastern bishops, mostly his adversaries, had gathered in Antioch and declared him fallen again: they had the support of the Aryan Constantius II, who during his long empire (337-361) gave Athanasius no respite. In the period he spent in Italy he obtained the support of Pope Julius and 50 bishops, as well as Constans (Constantius' brother). In the end the Council of Sardica rehabilitated him. But the persecution against him did not subside and reached its climax in the synods of Arles and Milan (353 and 355), where the emperor Constantius ordered the bishops to sign the condemnation of Athanasius, on pain of removal from their seats: only the saints Paulinus of Trier, Dionysius of Milan, Lucifer of Cagliari and Eusebius of Vercelli resisted. They were promptly exiled. In 356 it was the turn of Saint Hilary of Poitiers to suffer exile for having defended orthodoxy.

In the meantime, Constantius had appointed an anti-pope and exiled Pope Liberius, who at the beginning had strenuously defended Athanasius. Even the pontiff, however, under threat of death, then gave in to a compromise formula. Its exact content is not known, but it is known that it was an ambiguous Semiarian formula, containing the idea that the Father and Son are of “similar” but not the same substance. In that period the situation escalated to the point that 5,000 soldiers occupied Alexandria. Here churches were desecrated and the Christian people mobilised to defend their bishop, who for years had to take refuge in the desert, protected by anchorite friends.

Athanasius was able to return definitively to his Episcopal See only in 366, under Valens (who had previously exiled him), persevering until the end in his profession of the doctrine on the Most Holy Trinity. The ecclesial situation stabilized also thanks to the ascent to the pontifical throne of Saint Damasus, another energetic opponent of heresies. Athanasius was proclaimed Doctor of the Church in 1568. It was not without reason that the contemporary Saint Gregory Nazianzen, in his funeral eulogy, called Saint Athanasius “the pillar of the Church”.